A salacious crime in the pope’s backyard has gone unsolved for almost 14 years. Barbie Latza Nadeau on the double homicide—and the rumored gay love triangle that could be behind it.

On May 4, 1998, five shots rang out inside a private apartment tucked within the fortified walls of Vatican City in Rome. Dead were Alois Estermann, the newly appointed commander of the elite Swiss Guard army that protects the pope; Estermann’s Venezuelan wife, Gladys Meza Romero, a former model; and Cedric Tornay, who was a corporal in the Swiss Guard. No one heard the shots, according to neighbors who were interviewed after the murders, but the three bodies were enough proof to solve the crime, at least according to the Vatican. The Holy See’s official line was that corporal Tornay had killed Estermann and his wife before putting his 7mm pistol into his mouth and blowing his brains out. The motive was simple, they said. Tornay had been passed up by Estermann for a promotion and could not contain his rage.

But the truth behind the Vatican’s Swiss Guard murders is far more complex, says Tornay’s mother, Muguette Baudat. Earlier this month she pleaded to Pope Benedict XVI to reopen the case and clear her son’s name. In a brief interview with The Daily Beast, she says her son was the victim of a cover-up, not the perpetrator of a murder-suicide. “My son is not the man behind such a murder,” she said. “He was not crazy and vengeful. He was actually a victim in this crime.”

Baudat has written a letter to the current pope in the hope he will reopen the case. She believes that because Benedict was a key administrator in the Vatican hierarchy during her son’s murder investigation, he may be willing to reinvestigate the case for the sake of transparency. “He might want clear his conscience,” she says. “It would be the right thing to do.”

When it happened, the Swiss Guard murder shook Rome to its core. Because Vatican City is a sovereign nation, it has its own police and investigative units. The pope is the head of state, and no one in the papal administration has to answer to anyone outside the Vatican walls—even though the tiny nation is tucked inside the city of Rome. Secrecy shrouded the case from the moment the news broke. In the hours after a Vatican insider leaked the news of a murder, local Italian journalists speculated that then–pope John Paul II himself had been the victim of a gunman’s wrath. It took nearly 24 hours for the Vatican to clarify that it had been the head of the pope’s protective arm who had been killed in a murder-suicide and not the pope himself. 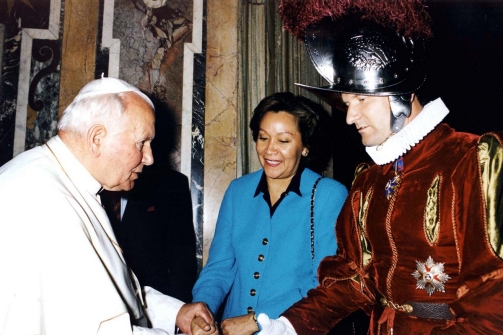 In the years that followed, reporters followed several leads in a yet- unsolved quest for the truth about what may have really happened that night. Several books have been penned about the case, but none so far have truly solved the crime. It was no secret within the Swiss Guard that Estermann was a bisexual who had a weakness for young recruits and had allegedly just ended a sexual relationship with Tornay, who was 23 at the time. One theory is that when Estermann turned his affections to another young recruit, Tornay allegedly lost his temper and killed Estermann and his wife in a jealous rage. In a book on the case called Verbum Dei et Verbum Gay (“God’s Word, Gay Word”), author Massimo Lacchei writes that in the days before the murders, he had observed Estermann and Tornay at what he describes as a gay brunch and had later interviewed Tornay, who he said was clearly attached to his superior. He says, ”They were so intimate and friendly for a subordinate and a captain.”

Another theory is that Estermann was at the core of a power struggle within the Swiss Guard itself. On one side was the über-conservative Opus Dei movement, and on the other a Masonic sect with growing strength within the elite guard. Estermann, who was appointed as the guards’ new commander just hours before he was murdered, was caught in the middle, according to a book called Blood Lies in the Vatican, written by anonymous authors who claim to be priests and insiders who live inside the Vatican walls. They maintain that Tornay was attacked and dragged to the Vatican cellar, where he was “suicided” by commandos and then later placed in Estermann’s apartment after the real assailants did their dirty work. They conclude, “The element that undermines the official truth is the fact that no one heard the five loud shots fired by the powerful pistol found under Cedric Tornay’s body.”

Tornay’s mother believes the second theory more than the first, but knows the truth could lie somewhere in the middle. She says her son was the pawn of more powerful entities and got caught in the crossfire in a situation he likely knew nothing about. She denies her son’s homosexual affair with his boss, but concedes that he may have been too trusting and therefore easily taken advantage of. Either way, she is determined to find the truth about her son.

Pope Benedict XVI has not yet responded officially to Tornay’s mother’s letter. Her lawyer Luc Brossollet says she will not let it go. “The case is full of suppressed evidence, contradictions, and lies,” he said recently. “It’s time to find the shameful truth.”