One thing that’s been bothering me about the contraception mandate controversy is simply that most of those objecting to this attack on Catholic “religious freedom” or “conscience protection”–however the issue it styled–are men, and most of them celibate. Cardinal Francis George of Chicago pointedly stated that “people of faith cannot be made second class citizens because of their religious beliefs.” Does that mean it’s OK to be made a second-class citizen on the basis of gender or your employer? There is a conflict of consciences here: We are talking about hundreds of thousands of women who work at Catholic social service agencies, colleges and universities, and hospitals. 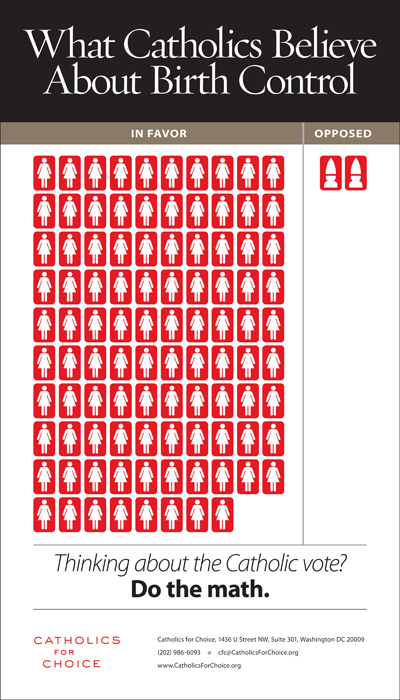 Cardinal Daniel DiNardo of Galveston-Houston argued in a USCCB statement on the mandate: “Pregnancy is not a disease, and fertility is not a pathological condition to be suppressed by any means technically possible.” True enough as far as it goes, but most women I know–both married and single–want to become pregnant after some planning, and an unexpected pregnancy is a serious matter, especially in our rationed health care society. Pregnancy is not a disease, but it is a difficult, costly, and sometimes perilous medical event. Whether he meant it this way or not, DiNardo sounds callous to the health care needs (and worries) of women in their reproductive years.

The fact is, church teaching addresses women’s bodies and their health care in profoundly intimate and different ways than it does the bodies of men. (One wonders how the conversation would be different if we were talking about prostate exams or erectile dysfunction.) It does not help the bishops’ credibility that women have had no deliberative voice in the creation of church teaching on birth control, and since none of the bishops are married, they are not in the position to consider more than intellectually the economic, emotional, and psychological dimensions of an unplanned pregnancy.

The fact remains that half of pregnancies in this country are unplanned, and half of those end in abortion. The emotional, psychological, economic, and moral costs of these pregnancies (and abortions) fall most heavily on the women affected, and I think it incumbent upon Christians to consider these women and their children–born and unborn–as we examine this moral issue.

While the bishops are right to keep the issue of the constitutional right to free exercise on the front burner–and it seems that the USCCB intends to push for a complete rollback of the mandate–I do not see how preventing a woman from using a legal medical means to decide when or if she becomes pregnant impinges on my right to excercise my faith. Indeed, my hope that greater access to birth control would reduce the number of abortions more than makes up for any concerns I have about the legal complexities surrounding the mandate’s effect on Catholic employers.