And then came the headline that surprised exactly no one and delighted a great many, even as it openly terrified countless thousands across the deep south and also Utah and Kansas and pretty much the entire GOP. The poor dears.

“Homophobes might be secretly attracted to people of the same sex,” is what the headline read, I mean obviously, I mean of course you already know what the researchers discovered, you and every conscious human within a 10,000 mile radius who also snickered, rolled her eyes and then sighed heavily with the obviousness of it all. It is not always the way? 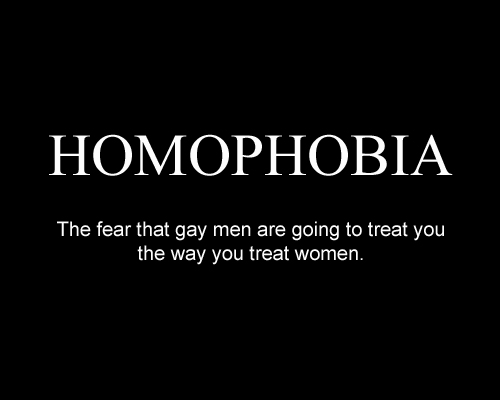 Really, who doesn’t already know? Who among us with the slightest acumen toward self-reflection doesn’t fully understand that the more you wail against something, the more violently outspoken or hateful you are against this or that perceived indiscretion, sexual proclivity, perversion, deviance, expression, delight, taste sensation, the more certain it is that said deliciousness secretly attracts you, turns you on and makes you enormously, terrifically scared?

Case after case, priest after priest, GOP senator after megachurch pastor after spittle-flecked Tea Party zealot — all suddenly caught pants down in a bathroom stall, in a leather bar, gay chat room, in a Grindr hookup app, living out their real and honest selves even as they rail and oppose and thump their Bibles everywhere else. Hypocrisy, thy name is homophobe.

Which is, essentially, exactly what the study found. One’s level of homophobia lies, quite frequently, in direct proportion to one’s own brutally closeted desire for homosexual sex. Result: self-denial, self hatred, wailing and thrashing and Prop 8-ing against an unfair world.

But before we dance and snicker too much, perhaps we should acknowledge: there is more to this study, and the common adage, than meets the jaundiced eye. Behind the humor and the sarcasm, there’s a sadness, a brutal truism common to the human melodrama. Shall we have a glance?

It goes something like this: Perhaps nasty homophobes are, the study gently suggests, to be empathized with, to be offered a modicum of compassion and understanding, due to the abject tragedy of their ignoble fate. And perhaps this offering, particularly in light of hateful trolls like Rick Santorum and his dark coven, perhaps this is one of the most difficult challenges you can name.

See, in this light, you can say homophobes (and in a similar way racists, sexists, Islamophobes, et al), they have been indoctrinated in the worst possible way. They have been led to their shallow bloodpuddles of misunderstanding by the church, by awful parenting, by violent misrepresentations of God, by shameful media propaganda, bad tattoos and cheap beer and way, way too much professional sports on weekends. Just a thought.

For most, it probably happened early. Somewhere along the arc of childhood, many anti-everything crusaders were stabbed in the heart with a very narrow idea of how life, love and sexuality are supposed to look, feel, move. And if, by adulthood, they fail to feel that way — and more importantly, if one’s own desires, deepest longings, spiritual aches somehow fail to line up with that bogus image (as they almost always do) — well, someone’s gotta pay.

Put another way: Hatred is, we all know, a learned experience. Someone teaches you that blacks are scary, Muslims are evil, women are lesser. Someone force feeds kids the vile falsehood that gay love is an abomination, as opposed to something obvious and common across every species of animal on the planet. I say ‘force,’ because kids will never believe it otherwise.

And why would they? The human soul, far from fixed, linear and predisposed to suspicion and doubt, is instead a fluxive, malleable, infinitely evolving thing, matching the insane, kaleidoscopic sweep of life itself. To lock the human heart into a cage of timid ideology or rigid sexual conduct, to forcibly limit its capacity for love is one of the most oppressive things you can ever do. Just ask the Catholic church.

Does this all excuse the homophobe’s acts, their nasty legislation, their bilious congressional votes? Does it give Rick Santorum, Rick Warren, Rush Limbaugh some sort of pass? Hell no. Does it give it a hint of understanding, and perhaps empathy, as we all recognize those places in ourselves where we have been similarly programmed, lied to, horribly misled? It might. Depends on your whisky.

Of course, it’s not universal. Not all hardcore conservatives secretly wish for a gay romp or ten. Many just act out of purely poisoned souls, or from the unconscious demon telling them that if they’re not allowed to express their deepest selves, if they can’t live life at a more honest frequency, no one can.

“How dare you!” they then sneer, to the gay couple, to the Burning Man participant, to the hippie or the artist or the educated deviant, the meditator, the spiritual seeker, the yogi or activist or appreciator of sex and tongue and yes. “What gall you have to be open-minded, autonomous, free to love and screw and dance however and with whomever you want. Don’t you know about the rules? Don’t you know how ugly life is? Don’t you know how flawed and guilt-soaked God designed you to be?

“Here, let me stab you with this ice pick of mistrust and visceral spiritual lack. There now. You are hereby as miserable as me. We are equal. I feel better. But not really.”

Maybe this is the greatest human tragedy, more divisive than any other: We are taught how to hate, to fear. American culture offers few tools with which to perform any sort of honest self-inquiry, to feel around in the subtler realms and see what we’re really about, independent of church, media, failed parenting, Rick and Rush and Fox. We are taught to ignore our deeper selves in favor of the collective group-think, codified programming, a wrathful and disconnected God.

This is the lesson: Do not ask deeper questions. Do not tap into your own genuine needs, sexuality, fierce spiritual magma. Do not dare suggest that most fundamentalist notions of Christian God are sort of detestable and gloomy, the exact opposite of what Jesus actually intended. Do not, most of all, dare to define it all for yourself, as your sex, your soul, your internal ethical slut see fit. What the hell do you think you are, free?