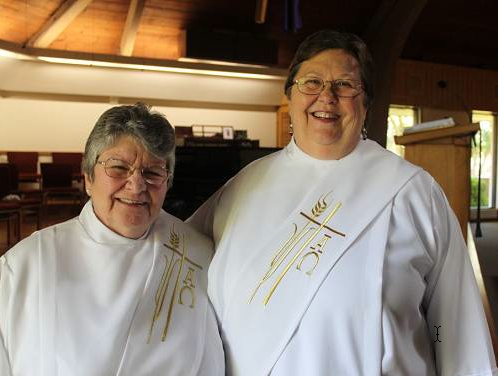 Miriam Picconi remembers sitting before a life-sized crucifix adorned with the body of Christ at her church as a young teenager.

“I would just see Jesus on the cross and I kept thinking, ‘If you did that for me, what can I do for you?’ ” she said.

Picconi, 68, said she was “called to minister” early in life. By age 16, she was teaching disabled children about Christ and visiting isolated people who were unable to leave nursing homes and hospitals. She said she became a nun at age 20, delivering communion and praying with people who were too ill to attend church.

“I always had a deep love for the Eucharist, in the way Jesus shares himself with us,” Picconi said.

There was one thing she couldn’t do — becoming a priest was off limits.

The Catholic Church doesn’t ordain women but some are seeking to change that. Picconi and Wanda Russell, both of Palm Coast, will be ordained into the Association of Roman Catholic Women Priests at 2 p.m. Saturday at the Unitarian Universalist Society in Ormond Beach.

Together they’re challenging a centuries-old tradition of an all-male clergy within the Catholic Church and many Protestant denominations. The ceremony will include the same rite used to ordain male Catholic priests.

The Catholic Church won’t recognize the ordination as being valid, according to a statement from the Diocese of St. Augustine.

“The Catholic Church is very clear and doesn’t take positions unilaterally and without substantiation,” according to a statement emailed from director of communications Kathleen Bagg. “And the Church does not discourage dialogue, except on the question of the ordination of women.”

Catholic leaders have repeatedly made it clear they have no intention of allowing women to join the priesthood. In his homily on Holy Thursday, Pope Benedict XVI denounced priests who have questioned the church’s policies on celibacy and ordaining women. He suggested dissenters were making “a desperate push to do something to change the church in accordance with (their) own preferences and ideas.”

But Picconi and Russell, who call each other “best friends,” say they’re not seeking the priesthood for the sake of protest. They believe God has been preparing them for this role for years and they’re ready to embrace it.

“If we were doing this just to revolt, we wouldn’t be accepted,” said Russell, 67. “You don’t do something like this just in revolt.”

About 130 women worldwide have been ordained into the Association of Roman Catholic Women Priests since 2002, Bishop Bridget Mary Meehan said. The movement campaigns for “justice for all,” not just women, she said. To be ordained, women must earn a master’s degree in pastoral ministry or an equivalent.

The two Palm Coast women and others say there’s historical and biblical support for a female priesthood. Many Protestant denominations ordain women and some have done so for decades. Russell remembers walking through the catacombs in Rome and seeing an image of a feminine priest wearing earrings.

Archeological evidence suggests the early church included female clergy, said Dorothy Irvin, an independent scholar with a doctorate in theology. Though Irvin said many lay people believe women are fit for the priesthood, Catholic church leaders squelch research or support for that cause, she said.

Picconi and Russell blame a climate of clericalism: Many Catholics grow up believing their church, and its leadership, are infallible. Fearing retribution, Catholics and their clergy don’t question authority. The women say several priests have told them privately that they support their cause.

“I don’t disparage them for not having the courage to speak the truth because I understand the dilemma,” Picconi said.

They were hard-pressed to find local churches, even those from other denominations, that would host their ordination. Some congregations said they supported the women’s mission, but they didn’t want to offend Catholic leaders and members.

A WAY OF LIFE

Though they take exception with parts of the church, Picconi and Russell say they are “cradle Catholics.” Picconi compared being Catholic to being Italian — it’s in her blood, she said. She said she joined the Missionary Servants of the Most Blessed Trinity in Philadelphia when she was 20. She was a sister for 25 years.

Even after she joined the ministry, she couldn’t shake the feeling she would “fall short of the ideal.” That changed about 10 years later as she sat on a beach and watched waves roll to the shore during a retreat in Puerto Rico.

“Once I discovered God’s profound, unconditional love, it became a passion,” Picconi said. “It’s not a matter of obeying laws or rules, even though there are guidelines. But ultimately, it is responding to God’s love. Not out of fear. Not out of obligation. But out of love.”

Picconi later served as a pastoral director and associate at a church in Frankfort, Ky., but she says she was “forced out” in 2008 when there was a changeover in church leadership. She was devastated, but she now thinks that period eventually helped lead her to the priesthood.

“Crosses are not always easy to bear but if you can bear them, it leads to resurrection,” she said.

Like Picconi, Russell also joined the ministry after high school. She joined the joined the Sisters of Loretto, a Catholic women’s community in Nerinx, Ky., for 13 months, though she didn’t take her final vows. Growing up during the Civil Rights era, Russell said she was inspired by the bravery of black Americans as they fought racial discrimination.

“I always knew I wanted to save the world,” she said.

But back then, career paths for women were limited, she said. She couldn’t stomach becoming a nurse and didn’t think teaching would suit her. After she left the ministry, she married, had a daughter and became a social worker. She retired after 25 years because she was “tired of putting Band-Aids on problems.”

She recalled going to church with her husband when she was in her 20s. The couple often grumbled about the sermons during the car ride home.

One Sunday morning, Russell said she was stunned by the priest’s message: If you don’t believe every word the church says, go home. She left for three years.

But she says God “expects you to go back to your roots” and Russell returned to the Catholic church. She had “an adult conversion” in her early 30s. She described that moment as a door opening and God’s love instantly encompassing her.

“I just fell in love with God’s people — all kinds of people,” she said.

Since moving to Palm Coast nearly three years ago, Picconi and Russell have attended St. Thomas Episcopal Church, which they say has supported their calling. Seeking the priesthood was a hard decision, they say, partly because they feel the church leaders and some of the members that they grew up with will reject them. But Russell says she fears only “the awesomeness of the responsibility.”

Even their own friends and family members have resisted their decision. Russell’s mother and sister told her they still love her, but won’t attend the ordination because they don’t understand it and won’t support it, she said.

Afterward, they plan to celebrate mass in their home with a small group of other believers. They envision a collegial relationship with the rest of the congregation. People will take turns giving meaningful sermons — a far cry from the “dead rituals” Russell said she experienced in some churches.

“God is present where two or more people are gathering in Jesus’ name,” she said.

Most of all, the two women say they dream of an affirming environment where all people, even those of other religious backgrounds, can worship together.

Though their path hasn’t been easy, the two women say it must be done.

“We have to do it now,” Picconi said. “We can’t wait for the next generation.”

“If we wait for Rome to change, it probably would never happen,” Russell added.

WHAT: Ordination of Miriam Picconi and Wanda Russell to the Association of Roman Catholic Women Priests