Ogden is the first Western state to host The General Episcopal Synod, an international conference for members and leaders of the North American Old Catholic Church. About 100 representatives from across the United States and several countries will be in attendance this weekend. 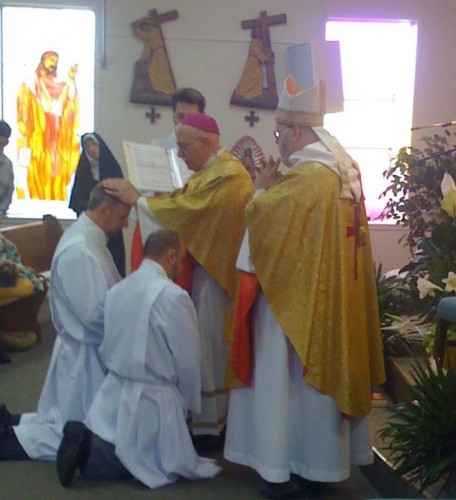 “It is noteworthy because it signals to the world that you can be Catholic and not be locked into a Middle Ages mindset,” said the Rev. Jim Morgan, who oversees the Glory to God North American Old Catholic Church, at 375 Harrison Blvd. He said the gospel is “relevant, vital and apposite to the people of our world and time. We are committed to bringing this truth to the forefront.”

Although the Old Catholic Church is a community of Christian churches with Catholic roots, members of Ogden’s congregation are especially attracted to the church for the love and acceptance they feel there.

“We’re a very caring, praying church,” said Robbin Hansen, who helps manage the office for the Ogden church. “A lot of people kick you out. You feel you are not wanted in other churches.”

She said her service animal as well as her domestic living situation seemed to be a problem at other churches. But not at Glory to God.

“It doesn’t matter who you are, we love you. We care about you,” said Hansen, who has been attending Glory to God for more than three years. “This church is an amazing church you dream of that will accept you. This is a personal church.”

She said many girls come from Park City, Kamas and Heber City to have their quinceañera Mass celebrated at the church.

Glory to God offers bilingual Mass every Saturday at 6 p.m. as part of its outreach to Latino and Hispanic populations. Morgan also celebrates baptisms and 3-year-old presentations.

Hansen is looking forward to watching the deacon and priest ordinations today at 6 p.m. So is Morgan. He said with the ordination of locals Robert Patrick Trujillo and Mark Dexheimer Trujillo to the priesthood, the church can “offer even more to the families and persons who are routinely ignored or shunned by other churches in our area.”

“It has been my experience that our congregation is made up of diverse populations, some gay, many straight, young and old,” Dexheimer Trujillo said. “We come from a variety of denominational backgrounds, some Roman Catholic, others Episcopalian, LDS or nondenominational communities.

“Our parishioners are folks on the margins, folks who have never found their home in other settings,” said Dexheimer Trujillo, who was raised in a “very establishment, Episcopalian” environment. “We are small but have created a marvelous mosaic. We are a very human group of people whose lives are changed by Christ. It is a beautiful encounter.”

In contrast to many churches, Glory to God accepts members of all sexual orientations.

“I would like my sisters and brothers — old and young, regardless of sexual orientation — to know that the gracious, almighty God that created them and all that is, loves them unconditionally, unreservedly and totally just the way he created them, and so do we,” Morgan said. “There is a church, family and home waiting for them here at Glory to God.”

Morgan said the best part of the church is the church family it creates.

“We come together to love, lend support, encourage and lift up each other,” he said. “We celebrate with each other and console one another.”

He said he particularly likes the church’s monthly potlucks, especially because his congregation has some great cooks.

Glory to God uses 21st-century tools such as contemporary music and multimedia “to engage heart, mind and soul,” Trujillo said.

Members of Glory to God — the first Old Catholic congregation established in Utah — want to expand it to other areas of the state.

Dexheimer Trujillo, a teacher at Tooele High School, plans to plant a mission in Tooele. Three other Salt Lake City-area congregations may join the church within a year.

“It makes perfect sense to grow the church in Utah,” he said. “The culture in Utah tends to be folks who take their faith seriously.

“We are Christians and serious Catholics,” he said. “We are constantly working to stay balanced. Our denomination strives not be become institutional.”

The North American Old Catholic Church was established in Ogden on June 6, 1996, and is now the Glory to God Church. Morgan said an average of 30 to 40 people attend Mass on any given Sunday, and church records include 65 people.

Dexheimer Trujillo said the goal is to keep congregations small.

“It sits within the context of being accepting. On purpose we keep small congregations, as opposed to getting lost in a large institution.”

He said the approach helps him to focus on pastoring instead of “church stuff.”

Morgan said the faith is rooted in tradition and the early days of Jesus and his teachings on peace, love, justice and equality. He said congregation members strive to care for the oppressed, disenfranchised, poor and unwell.

According to a church statement, “We are a church that worships God by living our faith every day of the week, speaking out against injustice and praying for healing in the world by being active believers, committed to loving our neighbors.”