Stan Sloan is not your ordinary Reverend. As a former priest of the Diocese, he has dedicated his life to serving his fellow men, fallen in love, was out during his priesthood, stood up and since departed from the Roman Catholic Church, and even scarier assimilated back into the dating scene after his priesthood. What matters to Sloan is service and perspective – both, which are for and from the people he has helped and continues to help throughout his career. 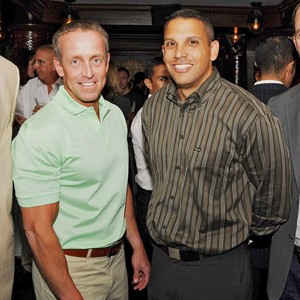 Currently, as Chicago House and Social Service Agency’s CEO, Sloan has taken his passion for service and his perspective from his days at St. Leonard’s House where he aided former prisoners and homeless people and instilled it back into the community. With exciting, new endeavors with Sweet Miss Givings Bakery, the development of a TransLife Center, as well as events that include Dance for Life, an all-out dance party, at the Park West on September 15 and the charity’s annual speaker series featuring fashion designer Kenneth Cole in November, Sloan has made Chicago House his new Diocese.

SS: (The Rev. Stan Sloan) I was a Catholic priest in the Diocese of Tulsa, Oklahoma up until 1995. In 95′ I just decided that I couldn’t do that anymore. I liked what I was doing and I liked the people I was working with, but I couldn’t stand working for the Roman Catholic institution or the hierarchy.

TC: What was the turning point that moved you to transition out of the Roman Catholic Church?

SS: As gay men we under sell this a lot; being gay is so much more about whom you have sex with. I mean even if you’re a celibate gay man, your gay friendships are still important to you. So, if I had a Friday night off, I would go out with my gay friends – not to gay bars because I knew that was crossing the line, but I would go out to dinner with them. Again, I was not breaking any vows. So, the bishop of Tulsa called me in and said that you’re fixing with the gay community. I said yes, but I’m being celibate and that we’re all God’s people. He said it’s one thing to minister to them but it’s another to be friends with them.

TC: Wow. How did that make you feel?

SS: Yea. It’s horrible. It’s okay to minister to them but to not befriend them? You don’t befriend people when you’re actually contributing to the cause let alone their [Roman Catholic Church] stance on birth control. If it sounds like I’m bitter and angry, it’s because I am.

TC: What do you do with all that bitterness and anger?

SS: I exercise like a mad man. I love my work. I’ve got good friends.

TC: However, you didn’t always feel this way. What was it that attracted you to the priesthood?

SS: I always had a natural prayer life growing up as a child. My parents were devout Catholics, and I enjoyed going to daily mass. It was always just a natural fit for me. I actually came out and had a boyfriend before I was a priest.

TC: Oh really? How did that work out?

SS: When I was in seminary I was celibate. So, as I went through the boards to start going into seminary, they asked me if I was gay and I said yes. At the time it was much more permissive than it is now. The church has gone backwards. However, I said if I do this I’ll be celibate.

TC: How did your boyfriend at the time react to you deciding to become a priest?

SS: I told him at the time, Jimmy this is something I have to try and that chances are that I won’t like it and I will be back. We were both kids at the time – we were like 23. He told me if I do this, you do this and when you come back, I won’t be here. So, we broke up, and I went.

TC: But then you quit the Catholic Church.

SS: Yup and never once did I think that I made the wrong decision. It was hard. You grieve it like you grieve a divorce. But, I was lucky that I happen to pick the Episcopal Church as my next step. We just okayed doing gay marriages, so the Episcopal Church is already ahead. I just feel like in the idea world, the Churches or religion in general should lead the rest of the world on social justice issues. However, instead you have ridiculous groups who do just the opposite. I’m very proud to be a part of denomination that is at the forefront of equality, sexual equality, and gender nonconforming issues.

TC: And then you transitioned over to serving and helping homeless people.

SS: Yes. Serving homeless people really puts perspective around your life and whatever is getting you down. You get to see people who have every reason to not have any hope but they do and they are excited about moving forward with their lives. Every day I get to make a difference.

TC: What kind of perspective did that give you at the time?

SS: I was just this naïve, white kid who grew up in Texas in middle-class America. I remember my first day at St. Leonard’s. I was working with all ex-offenders who just got out of prison. I was afraid of these guys. I’ve never been around a population like this. So, I went in and I had to talk to these guys. I started talking to them and I’m thinking to myself I’ve got two master’s degrees and so on. But then I realized that they were way more afraid of me then I was of them. For instance, I’m a part of the world they want to break into – mainstream society.

TC: How did this perspective help you at Chicago House?

SS: Well one of the things Chicago House gets to do on a daily basis is that we get to take our donors and show them the lives of our residents. I invite people all the time to come. It’s great because different people from different factions of our society can meet. We’re not as different as we think we are.

TC: Is there a story of a particular resident or someone that you have helped that stands out?

SS: One of my first days at St. Leonard’s House, I met a guy who I was working one on one with – helping him with his resume and stuff like that. It was like a light bolt when I was working with this guy; this guy’s IQ is off the charts. This guy is way smarter than I am. We stayed in touch and he did a good job while he was at St. Leonard’s House. He wanted to start up his own computer business. I gave him some money to help him get it started. Now, he owns his own computer business and has a home in Lake Forest. Mind you at the time he was just out of prison and would’ve been homeless if he wasn’t staying at St. Leonard’s House.

TC: When you started at Chicago House, you were still a priest in good standing but no longer a part of the Diocese. So, that means you could start dating. How was that?

SS: I didn’t remember from being 23 of how horrible dating was but I learned very quickly it’s a horrible process (laughs). I remember I had this over-the-top romantic idea that I would fall in love with the right one and wouldn’t have to date very much. Of course that’s not true, that’s not how life works.

TC: How was your “first” date?

SS: I signed up with The Smelts for no other reason because I decided that I wanted to date and that I need to find a husband. There was an adorable guy named Seth Hoff, who is still here in town, and I saw him and I thought he was so hot. So, I just found out his name and I just cold called him. I told him I was at swim practice today and that I saw him and asked him out to dinner. He said that I was the guy with no body fat. He said yes and we went on a few dates. I mean I was insane, so it must have been crazy for him. For instance, we would have fun on the date and instead of saying, “Hey, let’s talk soon,” I’d just say, “Can we get another date down?”

It was a very good, funny introduction into the dating world. (Laughs)

TC: What are some exciting, new developments for Chicago House?

SS: I’m excited to announce that Little Miss Muffet will take on Sweet Miss Giving’s product line. They have licensed our brand name and the internship program will operate out of their factory. Little Miss Muffet will give us a dime off every cookie, off every cupcake, and biscotti they will sell. Right now, we are trying to see how we are going to position ourselves with places like Costco and stuff since they are a national baker and they are already in all those places.

Our other big development is our TransLife Center. It will be in a gracious, old mansion where the first floor will be an emergency drop-in center for trans adults who just need to get off the streets for a day. The upstairs rooms will be built as well. There will be nine bedrooms for transgender men and women who are homeless and who need to get their life together. We will be hiring a full-time career counselor who will be transgender himself or herself who will be helping people with employment. We will have a doctor from Children’s Memorial Hospital who will be putting in weekly hours at the TransLife Center connecting people with care, since there is a huge instance of abuse of transgender people by medical professionals. So, as far as I know it will be the most comprehensive service offered to transgender people. We’re very excited about this.

TC: What do you want the LGBT community as a whole to take from Chicago House’s move in the direction of helping and aiding the trans community?

SS: We’ve made good progress as an LGB community and it’s time to start embracing our transgender brothers and sisters.

TC: What are some upcoming events Chicago House has coming up in the future?

SS: We will be having our One Night Stand event at the Park West on September 15. It will be a dance party. We’ve got all sorts of performers. Keith Elliott, who started Dance for Life and who started the burlesque show for TPAN will be a part of the event, so you know it’s going to be brilliant.

November 2 we’ve got Kenneth Cole coming for our speaker series. Kenneth Cole is the national head of the American Foundation of AIDS Research. So, he’s incredibly knowledgeable and will be a fantastic speaker.

TC: What do you want your legacy to be?

SS: That people’s lives are better because you existed.