For many years those within the lgbt community have read stories in lgbt press regarding the Salvation Army. Most of these stories revolved around the fact that the nation’s largest charity is decidedly anti-gay.

Now, with the explosion of social media, the noise regarding the Salvation Army’s policies is getting louder. Recently America Blog began urging people to print out vouchers (see below) and to place the voucher in the red donation bucket in lieu of cash.

Significant anti-lgbt moments in the Salvation Army’s past include:

In 2002 the charity made waves when it announced a policy that would have offered health insurance for a “legally domiciled adult” living with an employee. Essentially granting health benefits for same-sex partners of employees. This policy was reversed after only 2 weeks

In 2003 the Washington Post reported that the Bush administration was working with the Salvation Army in an effort to issue a regulation making it easier for government-funded religious groups to discriminate against gay people in hiring. According to an internal Salvation Army report the Bush White House gave the charity a “firm commitment” to work to protect them from state and city laws that prevent discrimination against gays in hiring and domestic-partner benefits. 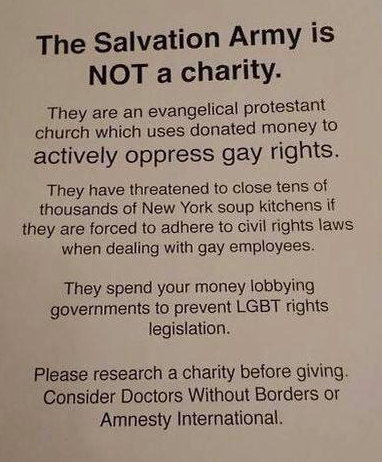 In 2004 the charity threatened to leave New York City if Mayor Michael Bloomberg enforces a new ordinance requiring all groups with city contracts to offer benefits to the same-sex partners of employees. Bloomberg was against the ordinance and did not enforce it.

In June of this year the following passage appeared on the official website of the Australian Salvation Army:

“[Homosexual activity is] as rebellion against God’s plan for the created order… Homosexual practice, however, is, in the light of Scripture, clearly unacceptable. Such activity is chosen behaviour and is thus a matter of the will. It is therefore able to be directed or restrained in the same way heterosexual urges are controlled. Homosexual practice would render any person ineligible for full membership (soldiership) in the [Salvation] Army.”