Salvatore Cordileone is the archbishop of San Francisco. Although — or, perhaps, because — he lives in the American city most identified with same-sex relationships, he is also the chairman of the U.S. Conference of Catholic Bishops’ Subcommittee for the Promotion and Defense of Marriage. During a press conference last Tuesday, a reporter asked Cordileone to comment on the string of successes for same-sex marriage during this month’s elections. The archbishop responded, “This is not a time to give up, but rather a time to redouble our efforts.”

The Catholic bishops may be holding firm, but their flock is drifting away from them. According to a recent poll by Pew Forum on Religion and Public Life, the number of religiously unaffiliated Americans has risen over the last five years. The poll’s authors attributed this decline in part to public cynicism about religious leaders who tap revenue streams from their congregations to advance their own political goals. 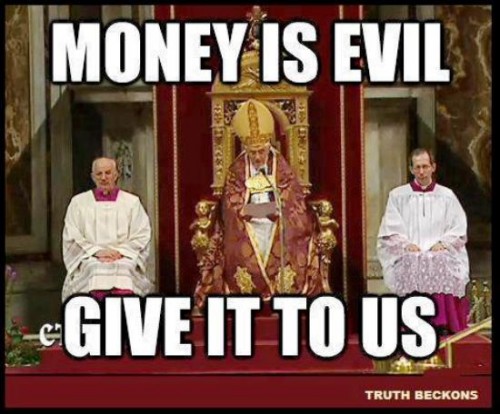 For gay Catholics our straight Catholic allies, this question became especially relevant during the recent elections. We saw the highly-coordinated efforts by some bishops to stanch the growing marriage equality movement – and the Catholic church resources that helped fuel their effort – and wondered, “Is it really possible to support marriage equality while still being a church-going Catholic who tithes?”

Take Minnesota, one of the four states where voters faced referenda on gay and lesbian couples. Using resources from churchgoers, the Minnesota Catholic Conference was able to give $600,000 to “Minnesota for Marriage,” an anti-marriage equality group. In Washington state, some Catholic bishops were so aggressive in their fundraising that the Public Disclosure Commission, the state’s campaign finance agency, had to warn the Washington Catholic Conference that they were not permitted to collect donations at Mass. (To comply with the law, volunteers were required to collect donations in separate envelopes.) In Baltimore, Archbishop William Lori headlined a pre-election fundraiser for Maryland’s anti-marriage equality group.

According to the Human Rights Campaign’s report Catholic Church: Top Funder of Discrimination, the Church and affiliated organizations – the Knights of Columbus and the National Organization for Marriage – were responsible for a whopping 60 percent of all funding for anti-marriage equality campaigns in the four states where the issue appeared on the 2012 ballot.

Yet according to a 2011 Public Religion Research Institute poll, nearly three-quarters of the American Catholic laity support state recognition of same-sex marriage or civil unions. According to that same poll, when same-sex marriage is explicitly defined as civil marriage – having no involvement with the church – support for it jumps from 43 percent to 71 percent.

Still, the reality is this: Every time Catholics tithe at a local parish, they are not only helping to keep the lights on for Mass and to make sure the priest has enough food in his stomach, they are contributing to diocesan coffers, which are often tapped for anti-equality ballot initiatives. So far, the IRS has not seemed especially interested in investigating allegations that the Catholic Church has violated its tax-exempt status by conducting political activity. And as Melissa Rogers, a legal scholar at Wake Forest Divinity School, told the Religion News Service, “When there’s an impression that the IRS is not enforcing the restriction – that seems to embolden some to cross the line.”

Given such circumstances, what are gay Catholics and our straight Catholic allies to do? Should we leave the Catholic church, as increasing numbers of Americans are doing? Or should we stay in the church and keep our hands at our sides, offering nothing more than a poker face when the collection basket comes around?

Fortunately, there is an alternative. Gift cards for priests — to local grocery stores, pharmacies, and gas stations — are a clear way to support the real work of the Catholic Church without undermining our own rights or those of our friends. We can ask our priests each week what their upcoming material needs will be and then following through with the appropriate gift cards — to local grocery stores, pharmacies, and gas stations. Catholic finance councils could even make arrangements with utility companies, allowing parishioners to make direct online donations toward a parish’s monthly utility bills. That would allow Catholics to help keep the lights on for Mass without unwittingly putting money in the hands of bishops like John Myers of Newark, who has publicly intimated that Catholics who support marriage equality are unworthy to receive communion.

Indeed, gift cards, which cannot be redeemed for cash, allow us to reaffirm our commitment to the clergy. Over the past several years, Catholic priests have had their image sullied in the public square, largely because of misguided bishops who chose to protect the church’s reputation instead of removing child abusers from the ranks. The entire profession suffered as a result. (A 40-something priest in the archdiocese of Washington once told me that at the height of the scandal, mothers at the supermarket would see him wearing his Roman collar and nervously pull their small children close to them.) Those of us who respect and admire our local clergy know that the vast majority of priests, far from being pedophiles, are good leaders who truly want the best for their congregations. Gift cards give us a way to empower them, making sure our funds go toward their immediate needs.

This non-cash tithing could result in an economic revival for Catholic parishes all over the country. It need not preclude cash gifts for specific Catholic charities and causes, like the St. Vincent de Paul Society or foreign missions. It would simply keep the anti-marriage equality movement from using faithful congregants as a major source of revenue. In this way, mainstream Catholics -the majority of whom support marriage equality for same-sex couples – can send an unmistakable message to Catholic bishops: We support our congregations and the clergy who serve them, but we also believe that love, happiness, and equal rights for everyone are part of God’s plan.