Antonin Scalia, you crazy cutup, you. With the Supreme Court currently gearing up to review two cases that have the potential to become watershed moments in the fight for marriage equality, the famously conservative associate justice is facing his old nemesis yet again – the HOMOSEXUAL AGENDA. And he’s doing it in his usual way — by behaving like an arrogant, dismissive tool to gay people, right to their faces.

At a speaking event in Princeton on Monday, the justice was confronted by a gay freshman named Duncan Hosie, who questioned why he has equated laws banning sodomy with those banning bestiality and murder. “It’s a form of argument that I thought you would have known, which is called the ‘reduction to the absurd,’” Scalia sniffed. That’s funny; I thought it was called hyperbole. Or maybe just a steaming pile of wrong. 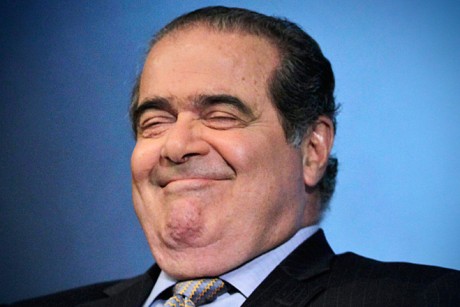 “If we cannot have moral feelings against homosexuality, can we have it against murder? Can we have it against other things?” he continued. Exactly. If we do not want anchovies, do we not reject pepperoni as well? Can we truly expect human beings to have different feelings about entirely different things? Ladies and gentlemen, I ask you, is not Team Edward tantamount to Team Jacob? This is what gets you a black robe and a job for life. He then told the student, “I’m surprised you aren’t persuaded.” How dreary and tiresome to be Antonin Scalia, and live in a whole world full of people who are not.

There may be something vaguely admirable in the way Scalia, who also told the audience that the Constitution “isn’t a living document … It’s dead, dead, dead, dead,” sticks so consistently with his textualism. But it’s the way he desperately tries to wrap it around controlling behavior he finds icky that’s peculiar to the point of ridiculous.

Take, for instance, the statements that Hosie was referring to. In 1996, in his dissenting opinion in the gay rights case Romer v. Evans, Scalia huffed, “I had thought that one could consider certain conduct reprehensible — murder, for example, or polygamy, or cruelty to animals — and could exhibit even ‘animus’ toward such conduct.” And in his 2003 dissenting opinion in the landmark Lawrence v. Texas case, which struck down sodomy laws, Scalia cited “government interest in protecting order and morality.” He warned about “state laws against bigamy, same-sex marriage, adult incest, prostitution, masturbation, adultery, fornication, bestiality, and obscenity” and “the impossibility of distinguishing homosexuality from other traditional ‘morals’ offenses.” Back then, he concurred with the assessment that “certain forms of sexual behavior are ‘immoral and unacceptable,’” citing legal limits on “adultery, fornication, and adult incest, and laws refusing to recognize homosexual marriage.” And he warned ominously that “today’s opinion dismantles the structure of constitutional law that has permitted a distinction to be made between heterosexual and homosexual unions, insofar as formal recognition in marriage is concerned.” Can you imagine how freaked out he must be, nine years later, now that this homosexual unions thing is happening? It’s everything he feared coming true. Hahahahahaha.

Scalia is still clinging tenaciously to his “ew, gross” vision of homosexuality — and working with all his might to prove that the great love of his life, the Constitution of the United States of America, agrees with him. In October, he eye-rolled at a lecture, “Homosexual sodomy? Come on. For 200 years, it was criminal in every state.” It must be difficult to find himself, a man appointed back in the glory days of Ronald Reagan, to be on the increasingly smaller, losing side of the culture war. To be the great and powerful Antonin Scalia, facing off against a measly college freshman, and to come across so defensive, so hollow and so very, very wrong. It’s called reduction to absurd. Scalia’s living it.