Ontario sculptor struggled to find a home for his haunting sculpture of Jesus sleeping on a bench.

Jesus has been depicted in art as triumphant, gentle or suffering. Now, in a controversial new sculpture in downtown Toronto, he is shown as homeless — an outcast sleeping on a bench. 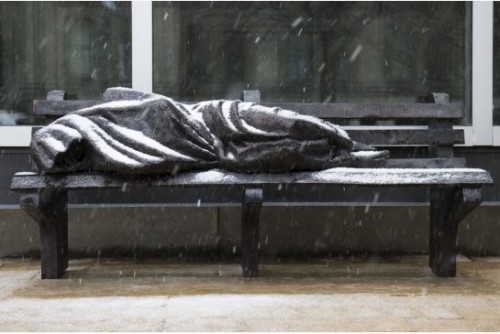 It takes a moment to see that the slight figure shrouded by a blanket, hauntingly similar to the real homeless who lie on grates and in doorways, is Jesus. It’s the gaping wounds in the feet that reveal the subject, whose face is draped and barely visible, as Jesus the Homeless.

Despite message of the sculpture — Jesus identifying with the poorest among us — it was rejected by two prominent Catholic churches, St. Michael’s Cathedral in Toronto and St. Patrick’s Cathedral in New York.

“Homeless Jesus had no home,” says the artist, Timothy Schmalz, who specializes in religious sculpture. “How ironic.”

Rectors of both cathedrals were enthusiastic about the bronze piece and showed Schmalz possible locations, but higher-ups in the New York and Toronto archdiocese turned it down, he says.

“It was very upsetting because the rectors liked it, but when it got to the administration, people thought it might be too controversial or vague,” he says. He was told “it was not an appropriate image.”

The Toronto archdiocese tried to help him find an alternative location, including St. Augustine’s Seminary in Scarborough. But Schmalz, who describes his work as a visual prayer, wanted to reach a wider, secular audience. “I wanted not only the converted to see it, but also the marginalized. I almost gave up trying to find a place.”

Now the sculpture stands near Wellesley St. W., outside Regis College at the University of Toronto. It’s a Jesuit school of theology, where priests and lay people are trained, with an emphasis on social justice.

Bill Steinburg, communications manager for the Toronto archdiocese, says the decision not to accept the sculpture at St. Michael’s may have had to do with renovations at the cathedral and “partly to do with someone’s view of the art.”

To some who have seen it, it speaks the message of the Gospels. When theologian Thomas Reynolds came upon it he felt “the shock of recognition.” He quoted the biblical passage: “ … the Son of Man has nowhere to lay his head.”

“I’m so used to seeing images of Jesus that are palatable,” says Reynolds.

But recent depictions of Jesus in political and social contexts have spurred controversy.

At Emmanuel College, the educational arm of the United Church where Reynolds teaches, there is a graceful sculpture showing Jesus’ suffering in a crucified woman. Schmaltz says he intended that his Jesus the Homeless can be interpreted as either male or female.

At Regis College, there is a small crucifix of Jesus as a landmine victim, missing a leg; another at the college shows Jesus as an Aztec.

A sculpture in a church in Uckfield, England, shows a euphoric Jesus wearing jeans and a collared shirt.

In 2011, British sculptor David Mach, created an agonized, shouting Jesus out of 3,000 straightened coat hangers that emerge like barbs from the body.

Jesus the Homeless is provocative, says Reynolds, because it ‘punctures the illusion of normalcy.

“In certain ways, Christian communities have been privileged and considered themselves the norm in society and that has made Christians comfortable in our complacency.”

Schmalz, 43, roots the sculpture in his experiences in Toronto, where he trained at the former Ontario College of Art. “I was totally used to stepping over people. You’re not aware they are human beings. They become obstacles in the urban environment and you lose a spiritual connection to them. They become inert, an inconvenience.”

He now lives with his wife and family in St. Jacobs, Ont. When he returns to Toronto, he sees the city differently.

“A lot of people who don’t live in Toronto or a big urban place are shocked to see human forms under blanket on too many street corners.”

The Regis sculpture shows Jesus as a wanderer who depended on the hospitality of others, says Reynolds. “The counternarrative in Christianity is Jesus the outsider.”

Not all embrace this interpretation, as Bryan Stallings and his wife Amy discovered. They run a mission in Branson, Mo., called Jesus Was Homeless, where they serve about 1,000 people a week, many of whom live in the woods and extended-stay motels. They’ve been criticized for the mission’s name.

“People who have issue with it are usually the staunch religious people,” says Stallings, “especially those who follow prosperity teaching and doctrine that says if you are homeless or poor you don’t have enough faith.”

Critics tell him that Jesus wasn’t homeless. “Then we reference Scripture and it sparks tons of conversation.”

The Toronto sculpture, funded by Kitchener real estate developer Peter Benninger, is situated near the front entrance to Regis College. “It’s one of the most inviting and authentic representations of Jesus,” says Rev. Gordon Rixon, dean of the college. “There’s the suggestion there is the king and he is answering our culture with his poverty, vulnerability and weakness.”

Though the slender figure occupies most of the two-metre bench, Schmalz purposely left space at the end for someone to sit close to the slumbering figure, “as uncomfortably as possible.”