The constitutional convention has voted overwhelmingly in favour of extending marriage rights to same-sex couples.
Some 79 per cent of members voted to recommend that the constitution be amended to allow for same-sex marriage, with 19 per cent against and the remainder having no opinion. 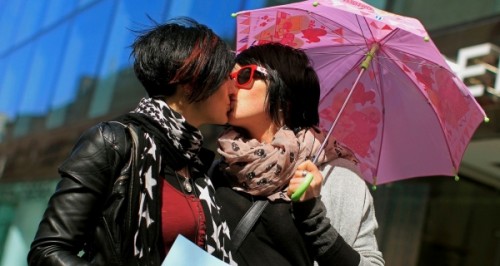 Supporters of the proposal, some of whom cheered and wept as the result was announced this afternoon, hailed it as a landmark on the road towards equality for gay couples and urged the Government to act swiftly by calling a referendum. The convention’s recommendation will now be sent to the Government, which has pledged to hold a debate in the Oireachtas and set out its response within four months.

Tánaiste Eamon Gilmore welcomed the result, saying he had always believed “that our laws reflect the past, not the future” on this issue. “It’s not the role of the State to pass judgement on who a person falls in love with, or who they want to spend their life with,” he said.

Asked what form the constitutional change should take, the convention – comprising one third politicians and two thirds ordinary citizens – 78 per cent of members voted for a directive amendment (“the State shall enact laws providing for same-sex marriage”) while 17 per cent opted for a permissive amendment (“the State may enact laws providing for same-sex marriage”).

The members also voted in favour of recommending that the State pass laws “incorporating changed arrangements in regard to the parentage, guardianship and the upbringing of children”.

Minister for Justice Alan Shatter said he welcomed the support expressed for “the reform and modernisation” of laws in relation to parentage, guardianship and upbringing of children.

“Essential work has been undertaken on the preparation of a new Family Relationships and Children’s Bill to address these issues in relation to children and details of the bill will be published in the coming months,” he said.

The same-sex marriage discussion had attracted considerable public interest, with more than 1,000 submission having been lodged with the convention. Today’s vote followed a weekend of discussion on the topic at the Grand Hotel in Malahide, north Dublin, where members heard from legal experts as well as supporters and opponents of the proposal.
In a joint statement this afternoon, advocacy groups Marriage Equality, the Gay and Lesbian Equality Network (GLEN) and the Irish Council for Civil Liberties welcomed the outcome as “an historic step”.

“It is a major milestone on the remarkable journey to full constitutional protection for lesbian and gay people and families in Ireland,” said GLEN director Brian Sheehan. “It builds on the extraordinary progress we have achieved over the last 20 years, and clearly demonstrates that Ireland is ready to take the next step to complete that remarkable journey.”

The Irish Catholic Bishops Conference was one of three groups that gave presentations arguing against same-sex marriage.

Commenting on the outcome today, a spokesman for the Catholic Communications Office said: “While the result of the constitutional convention is disappointing, only the people of Ireland can amend the constitution. The Catholic church will continue to promote and seek protection for the uniqueness of marriage between a woman and a man, the nature of which best serves children and our society.”

Convention chairman Tom Arnold thanked the participants and said proceedings were conducted in a fair and transparent manner. “This weekend’s discussions have been both passionate and thoughtful, both heartfelt and rigorous,” he said.
Independent Senator Ronan Mullen said the debate on same-sex marriage had been a “flawed process”. He said documentation commissioned from various experts ahead of the meeting was “not inclusive of all the relevant issues and failed to be completely impartial”.

Senator Mullen also said “some citizen members of the convention felt that they had been pressured by politician members at the tables to support a particular line”.

Same-sex marriage is permitted in 11 countries, and Bills are being debated in a number of others, including France, Britain and Uruguay.

The next meeting of the Constitutional Convention will consider the Dáil electoral system and the way in which politicians are elected.