On the subject of same-sex marriage, New England is now united. 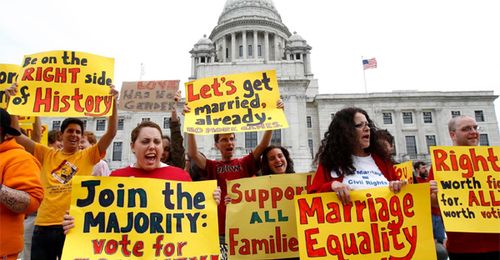 Rhode Island became the 10th U.S. state and final one in the region to legalize gay weddings today, after its House of Representatives approved a bill expanding marriage rights to homosexuals. Governor Lincoln Chafee, a 60-year-old independent, had lobbied for the measure since taking office in 2011 and planned to sign it immediately.

“New England is now complete,” Marc Solomon, national campaign director at Freedom to Marry, a New York-based group that helps and funds local gay-rights organizations, said by telephone. “We have an entire region of the country that has approved the freedom to marry.”

Chafee had pitched the measure as a way to spur economic development. He tentatively scheduled a bill signing ceremony for 5:45 p.m. local time, according to his office.

The law will make Rhode Island “a place that is welcoming to the younger generation, the creative generation, entrepreneurs,” he said in an interview at Bloomberg News headquarters in New York this week.

No Surprise
Frank Schubert, national political director for the National Organization for Marriage, a Washington-based group that fights same-sex marriage legislation around the country, said the loss for his side wasn’t a surprise.

“It is a heavily Catholic state, which is what helped us hold same-sex marriage off for so long,” Schubert said by e- mail. “It is also one of the most Democratic states in the country.”

Rhode Island’s House, led by Representative Gordon D. Fox, a Democrat and the country’s first openly gay House speaker, first passed a same-sex marriage measure by 51 to 19 in January. On April 24, the Senate approved a modified version by 26 to 12 that expanded protections for religious organizations. That change prompted today’s vote, which was largely procedural. It passed, 56 to 15.

All five Republicans in the 38-member Senate endorsed the proposal, marking the first time that a state Republican legislative caucus has unanimously done so, they said.

Generational Shift
“We recognize that there is a national consensus building on this generational issue, and we are glad that support for the freedom to marry is growing within the Republican Party,” the caucus said in a statement last week.

Two years ago, Rhode Island’s legislature pulled back a gay-marriage bill and instead approved civil unions. The state has granted fewer than 100 of them since, according to the Health Department. Rhode Islanders United for Marriage, a local gay-rights group, has said the low rate stems partly from the state’s proximity to others where gay marriage is already legal.