After all the Catholic Church has been through, it is beyond infuriating that Newark Archbishop John J. Myers can be so neglectful of his duty to protect children from sexual predators.

He should resign immediately and apologize to the families whose children he left exposed, barring some stunning new disclosure that could exonerate him in the face of the damning facts presented by The Star-Ledger’s Mark Mueller in today’s edition. 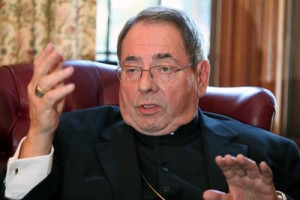 The case concerns Michael Fugee, a priest who was convicted in a sexual abuse case in 2003 after he confessed to fondling a 14-year-old boy, and being a compulsive masturbator obsessed with penis size.

The conviction was overturned when a higher court found the judge had given improper instructions to jurors. Instead of trying Fugee again, as they should have, prosecutors allowed him to avoid jail by joining a program for first-offenders.

Part of the deal was an agreement that Fugee signed, along with the archdiocese, committing all parties to keeping Fugee away from minors.

Fugee was not to work in any position involving children, or have any affiliation with youth groups. He could not attend youth retreats, or even hear the confessions of children.

With the full knowledge and approval of Myers, Fugee did all of those things. Look at the picture of him clowning around with children in today’s paper, and it makes you want to scream a warning. The agreement was designed to prevent exactly that.

This is not the first time Myers has shown contempt for the safety of children in his flock. While many bishops are making a sincere efforts to rehabilitate the church, Myers has shown a pattern of leniency toward pedophiles, indifference to potential victims, and a haughty disdain for those who dare to question his judgment.

Before this latest flare-up with Fugee, Myers had promoted him to an influential position in the church as co-director of the office that helps guide young priests, sending precisely the wrong message. Earlier this year, Fugee was found to be saying Mass and living at the rectory of a church in Rochelle Park. Parishioners had not been told of his criminal past, so again, children were exposed. In 2009, Myers appointed Fugee chaplain of St. Michael’s Medical Center in Newark, again without telling the hospital about Fugee’s restrictions. 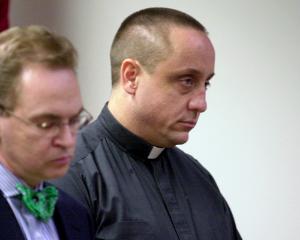 Unlike some other bishops, Myers will not release the names of priests who have been credibly accused of abuse.

In 2004, he wrote a letter of recommendation to six dioceses in Florida for one priest, a week after learning the priest had been accused of assaulting a woman after breaking into her house. The same year, he banned one priest from public ministry after investigating an allegation that he had abused a boy, but did not notify laypeople or other priests. In 2007, he did not tell laypeople about a credible finding of molestation against a priest working in Elizabeth and Jersey City, information that was finally turned up by a victims’ group.

Fugee is, or at least was, the real danger. He seems to think he can break the rules. It is Myers’ job to stop him, and he is instead enabling him.

He is refusing to discuss any of this. Our hope is the prosecutors press him to do so. He is a part to the agreement on Fugee, which was signed by the archdiocese’s vicar general on behalf of Myers, and which has clearly been broken.

In the meantime, for the sake of the children, Myers should step down.

One Reply to “Newark Archbishop John Myers must go: Editorial”