I greet you in the loving name of our Courageous Lord and Reigning Savior, Jesus Christ. I hail from the Diocese of West Missouri of the Episcopal Church in the United States of America. I write you this letter in response to your recent comments regarding marriage equality and its place in the Anglican Church (of which, as you know, the Episcopal Church is a part). More specifically, I write this letter in response to your comments regarding the effect that the American Church’s stance on marriage equality has had on Christians in Africa. 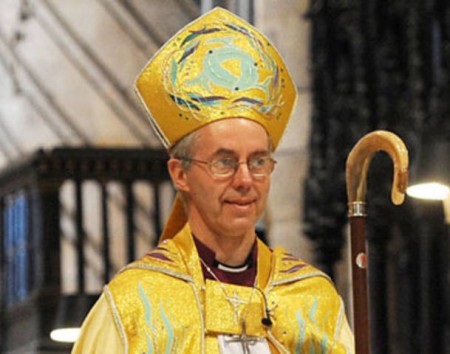 In your recent LBC radio interview, a woman inquired as to why the issue of marriage equality wasn’t being left up to the “consciences” of individual clergy the same way that remarriage after divorce was a few decades ago. In response you made a statement that I want to use as the thesis of this letter. You said “what we say here is heard around the world.” Most Reverend Sir, there are some who will lambaste this comment as egocentric at best, or the dying vestige of a Church struggling to identify itself after the death of the British empire at worst. As a scholar of precolonial West African history, I could use this as the locus of my argument against your comments, but I will not.

Instead, I’ll actually agree with you, but from a different angle. I don’t believe that the majority of the world is waiting with baited breath to see what riveting spirituality is coming from Lambeth. Rome? Maybe. Lambeth? Probably not. Before becoming an Episcopalian, I couldn’t have even told you where Lambeth was.

But I do believe that when a group of people choose to act on courageous love and death-defying faith, that is heard around the world. I’m too much of a student of Dr. Martin Luther King, Jr. and the American Civil Rights Movement to think and believe otherwise. When Dr. King arrived in Montgomery, Alabama to organize the bus boycott, he was fully aware that his presence would cause hardship for those African Americans who lived there and throughout the South. But he still showed up. He still organized. He still marched. If he had let hardship and the “shadow of death” deter him, Most Reverend Sir, there’s a good chance that I, an African American, would still live in a nation where segregation is the law of the land. Dr. King, dared to love courageously.

I understand that being British, your cultural and spiritual ties to Dr. King don’t run as deeply as mine, so I’ll appeal to a common courageous lover that both you and I have an affinity for – Jesus Christ. He too arrived with a message that wasn’t very popular. “Love God,” he said, “and love your neighbor.” He went around Roman occupied Judea and dared to preach and teach about another kingdom where love and justice, not oppression and inequality, ruled the day. It was a message and a ministry that ultimately got he and his apostles killed. Yet, when faced with the reality of the pain of the cross, our Lord said “thy will be done.”

It seems to me, Most Reverend Sir, that your most recent comments essentially blaming the American Church for the death of African Christians are couched in cowardice, not Christian courage. Rather than looking to our Lord as an exemplar of courage, it seems to me that you have chosen to allow terrorists to dictate the practice and ministry of the Church. If they can dictate this then what is next? Shall we go back to men only in Holy Orders because to ordain women would upset some sacrosanct cultural paradigm? Is the Church not supposed to be the group of people found guilty of “turning the world upside down” (Acts 17:6) for the sake of the Gospel?

Perhaps the most telling part of your interview was where you stated that you had “hesitations” about whether marriage equality and scripture could coexist in the Church of England. Herein lies the crux of the whole argument. As with most well-meaning Christians, you appeal to scripture and the traditions of the Church when they suit your cause, but depart from them when you deem it necessary. For example, you hesitate when it comes to affirming marriage equality, but affirm female bishops within the Church of England, though the plain letter of scripture suggests in 1 Timothy 2:12 that women shouldn’t teach in Church nor hold authority over a man. Funny thing, that scripture.

Most Reverend Sir, I do believe you to be a pious and good Christian whose conscience is truly vexed by this situation. But, I also believe that in the face of evil and injustice, you have chosen to respond from a place of fear rather than faith. In a time where the world is starved for prophetic and loving actions, you have chosen to take the light of the Church and hide it under a basket. Might I suggest, Most Reverend Sir, another way forward.

I had a professor in seminary who told me that “real ministry leads ultimately to the cross.” Might I suggest that the way forward is through the cross. That thing that you wear around your neck isn’t a “good idea” or some ancient, twisted “marketing-strategy-gone-wrong.” It’s our calling. It’s our destiny. There is no Easter without Good Friday; no resurrection without death. Maybe years of “Christendom” and imperialistic Christianity have diluted this message. Maybe that’s the reason so many in our world today can so easily walk away from the faith – it promised them everything without asking them for anything in return. Faith that asks for nothing in return is not faith, but a phantasm or a fantasy. That, as I’m sure you know is not the faith of the martyrs; that is not the faith of our Lord. I believe that it is through courage that the Church shall be reborn. It will be because women and men were willing to lose their lives, not preserve their lives, for the Gospel’s sake that we will experience the resurrection that is going to accompany this protracted Calvary voyage. Was it not St. Ignatius who reported to have said while he was a waiting by is own martyrdom “My birth is imminent. Forgive me, brethren. Do not prevent me from coming to life”? The time has come for the Church to come to life.

What Jesus’ interaction with the cross teaches me is that courageous love is possible, and even necessary, in the face of such vehement hatred and evil. Moreover, his triumphant victory over the death of the cross teaches me that ultimately it is courageous love that wins in the end. I’m sorry that we live in a world where evil is still present, where we must choose daily to persevere against such evil, and where too often lives are lost at the hands of such evil; but, the lesson of the cross is this – evil may win the day, but the victory belongs to God.

If you are truly grief-stricken over the possibility that affirming marriage equality in England will bode negatively for Christians in Africa, I encourage you to look at this through the eyes of courage, not cowardice. Look injustice square in the face and dare to preach courageous love until “Justice rolls down like waters and righteousness like a mighty stream.” Declare to Pharaoh “let my people go,” and if he rebuttals with “more bricks without straw,” still choose justice. Stand up for the least, the lost, and left out and let the God of the Oppressed, the same one who subjugated mighty Pharaoh, fight the battle.

But, if you are still unconvinced that marriage equality has a place in the Church [of England], then say that. Own the truth of your struggle without scapegoating and blaming others. Say that scripture teaches that marriage is between “a man and a woman” and, in addition to pointing out how you’re wrong, I will thank God that you have no canonical authority here.

It is true that we live in a community, Most Reverend Sir, and we are called to care for one another; and it precisely because we live in community that we are called to walk in courageous love. You stood by the graves of hundreds of martyrs who you say were killed because marriage equality is being embraced in America. You mentioned how that image has seared its way into your soul. I’m so deeply sorry that you have had that experience, but clergy throughout the world stand by while the souls of faithful LGBTQ Christians continue to be martyred by a Church who continues to pay only lip service to justice and mercy, a Church who keeps saying “wait” and “listen” and “discern” and with each passing day slips further and further past the point of irrelevancy. At some point the Church has to choose to be courageous or it shall cease to be the Church at all.

What we say here is heard around the world. We can either speak a word of fear or a word of faith. Frankly, Most Reverend Sir, the world has had enough fear. Choose faith.

Signed,
The Reverend Marcus Halley, a servant of Jesus Christ.