by Matt Comer
Students and parents at Charlotte Catholic High School are speaking out after they say a campus lecturer forcefully condemned homosexuality with outdated statistics, prejudiced stereotypes and other extremist claims. 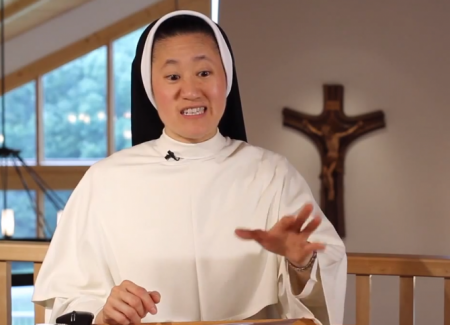 As of Friday morning, more than 2,100 people had signed onto a Change.org petition asking the school and its chaplain, Father Matthew Kauth, to apologize for the lecture led last Friday by Sister Jane Dominic Laurel, a professor at Nashville’s Aquinas College, whose other lectures and presentations posted online also contain wildly inaccurate accusations about gay people and sexuality.

In a separate action, 64 students and 86 alumni signed onto a letter with similar requests and sent directly to school officials.

EXTRA: Read the full alumni and student letter to the school

“Then she started talking about how gays [sic] people are gay because they have an absent father figure, and therefore they have not received the masculinity they should have from their father,” reads one student’s account of the message. “Also a guy could be gay if he masterbates [sic] and so he thinks he is being turned on by other guys. And then she gave an example of one of her gay ‘friends’ who said he used to go to a shed with his friends and watch porn and thats why he was gay. … Then she talked about the statistic where gay men have had either over 500 or 1000 sexual partners and after that I got up and went to the bathroom because I should not have had to been subject to that extremely offensive talk.”

A gay Charlotte Catholic student, who did not want to be publicly named because he is not fully out at school or home, said he was upset by the assembly, which was mandatory for all students to attend. He wants the school to apologize, too.

“I would like them to issue a formal apology to the students and to the parents and alumni,” the student told qnotes. “I want them to know how upset everyone is and for them to acknowledge that.”

David Hains, a spokesperson for the Catholic Diocese of Charlotte, told qnotes a parent meeting is scheduled for next Wednesday. It will be held at 7 p.m. in the school’s gym.

qnotes asked Hains what the school or diocese would do to ensure that voices like that of the closeted gay student are considered at the meeting. He said he was certain the issues would be discussed at length.

“The parents of students who are gay and lesbian are obviously going to be welcomed at the meeting,” he said. “There are many of our families at Charlotte Catholic who have students, relatives or friends who are homosexual and that point of view, I’m certain, is going to be represented among the parents at the meeting.”

“She talks on a broad range of subjects, so I don’t know that the content of the talk at Charlotte Catholic will be the subject of what she will be talking about in May,” said Hains.

Hains said LGBT people and others sometimes have a “misunderstanding on the church’s stand on marriage and its welcoming of homosexual people into Catholic churches.”

Laurel, the Charlotte Catholic High lecturer, has a history of extremist, anti-gay views. She has partnered with the Ruth Institute to present lectures and conferences opposing same-sex marriage. The Ruth Institute was formerly funded by the National Organization for Marriage, a group which has pushed anti-LGBT constitutional amendments nationwide and whose founder has compared gays to pedophiles.

In one lecture posted online, Laurel claims that more young women are engaging in oral sex and says, “This is not a normal sexual act. It’s something that’s imported from the homosexual culture. It’s not part of the natural love between man and woman.”

In another lecture, Laurel speaks at length about the Folsom Street Fair, a San Francisco fetish event. In another video, she says that androgyny is a tool of Satan and that “devil-worshipers” have three goals: to continue abortions, to destroy traditional marriage and destroy the distinction between male and female.

Students and alumni have described the lecture as “teachings of hate and intolerance.”

“Last week’s presentation represents a betrayal of trust,” the student and alumni letter to school officials reads. “Your responsibility to provide nurturing and informative education to the students of Charlotte Catholic was shrugged off. Your mission to truthfully convey the teachings of the Church—the teachings of love, compassion, and humility—was replaced by teachings of hate and intolerance.”