This week could mark the last rites for the Anglican communion as a truly global Church.

The Archbishop of Canterbury Justin Welby has called the 38 Primates or leaders from the global communion to a make-or-break meeting in Canterbury, where the bitter divides over gay rights and same-sex marriage are expected to dominate discussions.

The main question ahead of the meeting is not whether but when church leaders from up to six African countries may choose to leave the summit.

The communion itself has been likened to a lengthy marriage that is now coming to an end, with many wondering whether this is the time to move into separate bedrooms, and tell the children, or to decide to file for a divorce – and whether that split can be managed amicably.

One Church of England source has termed it 80% likely that some will walk out of the meeting after the agenda has been agreed, as those who – on Biblical grounds – are firmly against accepting homosexuality want an apology and repentance from the liberals within the US Church for appointing openly gay priests and bishops.

After years of sniping and sometimes open warfare, the Most Reverend Justin Welby is keen to move the Anglican Church – and the more than 80 million followers that it claims around the world – beyond the issue of sexuality to focus on what he and others see as the real challenges – global violence in the name of religion, climate change and poverty.

In the face of such intractable differences over Christians who identify as lesbian, gay, bisexual or trans, Lambeth Palace may well suggest that the communion reshapes itself into a loose confederation of churches, which can be joined by those who wish to do so, rather than trying to shoehorn radically different world views into one grouping led by Canterbury.

The current disagreement boiled over into open hostilities when the Episcopal Church in the US consecrated the openly gay (and non-celibate) priest Gene Robinson as Bishop of New Hampshire in 2003.

That split the Church openly in the US, with the breaking away of the traditionalist Anglican Church of North America (ACNA).

Its Archbishop, Foley Beach, who termed that consecration “open depravity” and “sin”, has also been invited to parts of the meeting in Canterbury, although ACNA is not an official part of the Anglican communion, to the dismay of some liberals.

Archbishop Beach’s views are likely to find an ally in Archbishop Stanley Ntagali – the leader of the Anglican church in Uganda – where active homosexuality is a criminal offence.

Last week, Archbishop Ntagali warned on his website that he would walk out of the meeting of Primates if “discipline and Godly order” were not restored to the communion.

Likewise, Archbishop Eliud Wabukala of Kenya has warned against the global “ambitions of a secular culture”, calling for a return to Gospel beliefs. 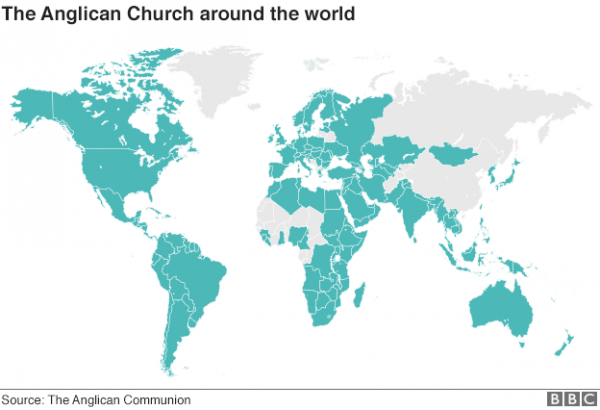 Both are members of the group of conservative Anglican churches known as GAFCON (Global Anglican Future), whose General Secretary Peter Jensen has said that “truth matters even more than institutional unity”.

GAFCON’s members see themselves as “authentic” Anglicans who follow Gospel values, and the group could ultimately form the leadership of those conservative churches if this meeting leads to a formal schism – although that would be a lengthy bureaucratic process, needing agreement from church members in the relevant Anglican province.

Given the fractious Primates’ meetings of the past, the Archbishop of Canterbury Justin Welby has done well simply in persuading all 38 Primates to meet around one table this week, using much of the personal capital he built up during his visits to every single Anglican province around the globe.

Whatever happens at the meeting itself, he has done all he can to make the relationship work, although it is increasingly clear that the current institutional arrangement is no longer fit for purpose, given such deep disagreements over a fundamental issue.

The more liberal provinces that are open to changing Church doctrine on marriage in order to allow for same-sex unions include Brazil, Canada, New Zealand, Scotland, South India, South Africa, the US and Wales.

However, England is one of the countries where that bitter divide over sexuality is already at the heart of much anguished discussion and debate.

With equal marriage now part of civil law in England, the Church’s insistence that it should not form part of Canon law is increasingly contested by some of its own clergy and members of its congregation.

The strength of feeling over the issue in England was made clear in a heartfelt open letter to the Archbishops of Canterbury and York on Sunday, which called on the Church to repent over its treatment of lesbian, gay, bisexual and trans Christians as “second class citizens” over issues of sexuality.