Documentary filmmaker Eric Kruszewski shows that being Catholic and being gay are not mutually exclusive. 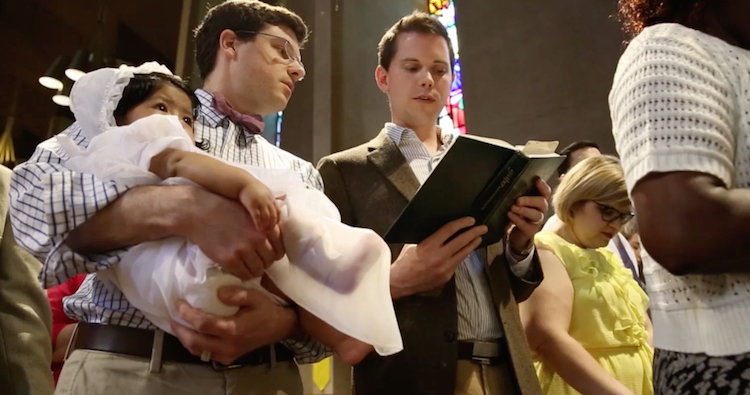 To identify as a gay devout Catholic seems contradictory to many people—and for good reason. The Church, both historically and presently, continues to debate the sinfulness of homosexuality: traditionalists condemn it, religious liberals accept it, and a host of individuals (often closeted themselves) are lost in a gray mist of confusion, hate, and more often, self-loathing.

The LGBT Educating and Affirming Diversity (LEAD) Ministry within the Saint Matthew Catholic Church in Baltimore seeks to harmonize religious and sexual orientations, while providing church-goers with a community and place of congregation that is unanimously accepting. Most recently, documentary filmmaker Eric Kruszewski crossed paths with LEAD and was so moved by the group’s mission statement, decided to create a documentary series.

“I was raised Catholic, but have not practiced my faith in years. And before this project, I had never heard of Saint Matthew Catholic Church. One of the parishioners knew my work and me. So when we bumped into each other at a media event, she told me, ‘I have a story for you…’”

When Kruszewski finally met the LEAD members, he was taken by their hospitality and warmth, both directed towards himself and to each other:

“The first time I met the LEAD members was during their monthly meeting. When a lesbian couple announced they were getting married and moving into a new apartment, another member offered rooms-worth of furniture to get them started. When a newcomer was introduced to the group, the room was pin-drop quiet as he/she shared an intimate story of love and heartbreak. It was clear that there was something special within this congregation.”

Kruszewski quickly felt the need to honor LEAD with a documentary he could share:

“There’s no way I can fully understand what it’s like to be an LGBT Catholic in 2016. But through interviews, the documentary process and getting close to the individuals portrayed in these videos, my goal was to accurately capture their thoughts, feelings and experiences. Perhaps the video series becomes a platform for open discussion surrounding LGBT Catholics acceptance, as well as fuel to keep alive their passion for change and desire for full inclusion. After all, before they knew their sexuality, the Saint Matthew LGBT people were baptized Catholic. Why should that change upon discovering themselves?”

Throughout this week, we will be posting individual videos about LEAD members.

Kruszewski’s first video below is a mere introduction to the many people who identify as Catholic and LGBT: