A MAJORITY of Catholics, Christians and other religious people support gay marriage and will likely vote for it in the postal survey, according to a new poll. 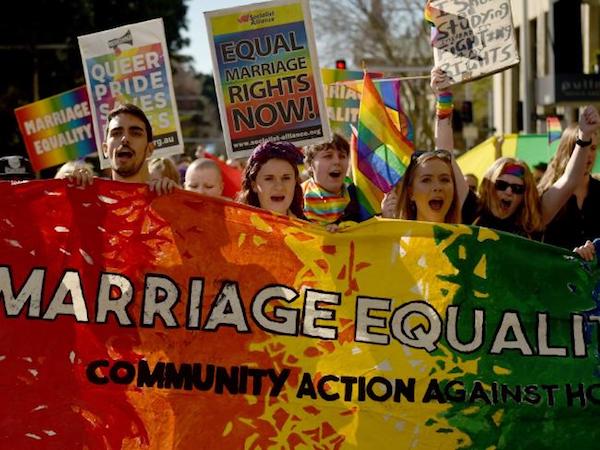 The research shows 58 per cent of people of faith back the “yes” campaign, compared with 79 per cent of non-religious Australians.

Catholics and non-Christians were more likely to support same-sex marriage, with two thirds of both of those groups saying they were in favour.

The polling, commissioned by the Equality Campaign, was conducted last week by Jim Reed of Newgate Research who surveyed 1000 people online, Fairfax reports.

t comes as the Archbishop of Melbourne urged Catholics to vote against same-sex marriage “for the health and future” of society.

Denis Hart last week wrote an open letter urging Catholics to vote in the optional postal survey when forms go out in September.

“We sincerely believe that there is a core and fundamental wisdom and truth in the traditional definition and understanding of marriage that should not be ignored and is worth keeping for the health and future of our society,” he wrote.

He warned future gay marriage legislation could infringe rights of freedom of religion and conscience.

“It could result in restrictions on the right of ministers of religion and religious bodies and organisations having the freedom to teach, preach and speak about marriage between persons of the same sex being contrary to their religious or conscientious beliefs,” he wrote.

Archbishop Hart called for an “active and respectful” debate, urging Catholics to welcome gay Australians as brothers and sisters.

“Like all human beings they are created in the image and likeness of God,” he wrote. “They have a right to expect to be loved and welcomed and not subject to unjust discrimination.”

He told ABC radio on Wednesday homophobic material disseminated as part of the campaign against same-sex marriage was “totally inappropriate”, insisting both sides should express their ideas with conviction instead of creating a campaign of hate.

Meanwhile, a recent Newspoll found 67 per cent of respondents “definitely will” vote in the poll.

Fifteen per cent said they probably will fill out the ballot while three per cent are planning to abstain.

Support for same-sex marriage remains relatively unchanged from a survey last September, with 63 per cent of those polled saying they would vote “yes: — compared to 62 per cent a year ago.

Nearly half of the 1675 respondents say they support the postal ballot, similar to an Essential poll last week.