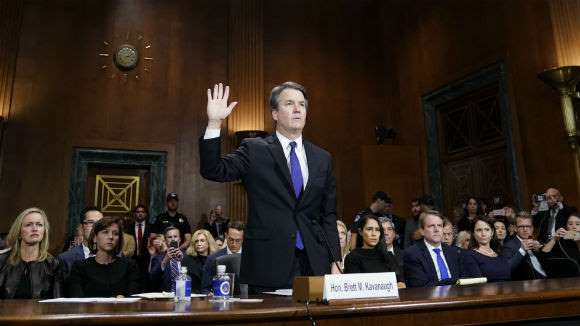 The piece was published after Kavanaugh and Christine Blasey Ford, a woman who accused Kavanaugh of trying to rape her in 1982 at a house party, testified before of the Senate Judiciary Committee about the allegations.

“Evaluating the credibility of these competing accounts is a question about which people of good will can and do disagree. The editors of this review have no special insight into who is telling the truth. If Dr. Blasey’s allegation is true, the assault and Judge Kavanaugh’s denial of it mean that he should not be seated on the U.S. Supreme Court,” the editors wrote.

“But even if the credibility of the allegation has not been established beyond a reasonable doubt and even if further investigation is warranted to determine its validity or clear Judge Kavanaugh’s name, we recognize that this nomination is no longer in the best interests of the country. While we previously endorsed the nomination of Judge Kavanaugh on the basis of his legal credentials and his reputation as a committed textualist, it is now clear that the nomination should be withdrawn,” they added.

“Judge Kavanaugh is a textualist who is suspicious of the kind of judicial innovation that led to the court’s ruling in Roe. That decision removed a matter of grave moral concern-about which there was and remains no public moral consensus-from the democratic process,” they wrote at the time.

The magazine’s reversal reflects the tumult into which sexual misconduct allegations have thrown Kavanaugh’s confirmation process.

Kavanaugh has been accused by Ford, Deborah Ramirez and Julie Swetnick of varying degrees of sexual misconduct while he was in high school and college. He has adamantly denied the allegations.

Thursday’s hearing was a crucial test for Kavanaugh, who came out with his most ardent defense yet against the allegations in an attempt to sway lingering swing votes on Capitol Hill and to convince Trump to not withdraw his nomination.

Kavanaugh’s efforts appeared to convince Trump to stick with his nomination.

Trump reiterated his commitment to Kavanaugh, tweeting Thursday evening, “Judge Kavanaugh showed America exactly why I nominated him. His testimony was powerful, honest, and riveting. Democrats’ search and destroy strategy is disgraceful and this process has been a total sham and effort to delay, obstruct, and resist. The Senate must vote!”