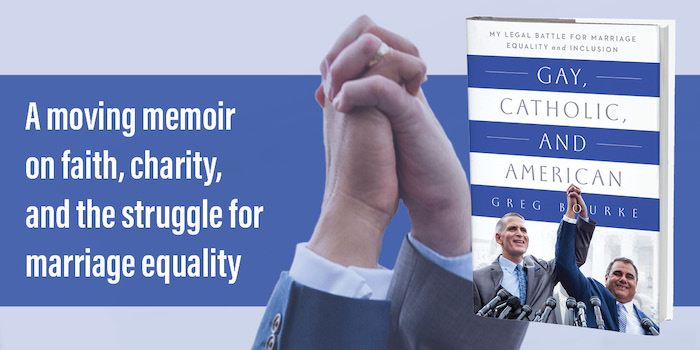 During his time at Notre Dame from 1978 to 1982, Greg Bourke’s identity as a gay man was something to be discussed only through student-run hotlines and covert off-campus meetings.

Now, almost 40 years later, Bourke is in the midst of a book tour for his new memoir “Gay, Catholic, and American: My Legal Battle for Marriage Equality and Inclusion” — and he said one of the most surprising parts things to him is that the book was published through Notre Dame Press, the University’s official publishing house.

“This is really significant for [Notre Dame Press] because I don’t know that they’ve ever had a queer-friendly title before,” Bourke said.

“Gay, Catholic, and American” is the first book about LGBTQ identity to be released through Notre Dame Press, soon to be followed by Darrel Alejandro Holnes’ “Stepmotherland” in February 2022.

“Gay, Catholic, and American” follows the history of the American LGBTQ rights movement through the lens of Bourke’s personal life. After being dismissed as a troop leader from the Boy Scouts of America in 2012 on the basis of his sexuality, Bourke began a life of activism with his husband Michael De Leon, with the two eventually being named plaintiffs in Obergefell v. Hodges, the landmark Supreme Court case decided in 2015 that legalized same-sex marriage across the nation. Both devout Catholics, Bourke and De Leon have also advocated for LGBTQ liberation within the Church, and their efforts earned them the title of 2015 persons of the year by the National Catholic Reporter.

But before he made strides for equality on the national stage, Bourke started small. Throughout his four years at Notre Dame, he worked with other students to sustain and expand an underground network of solidarity — despite the administration’s oppositional efforts.

“Back in 1980, when I started at Notre Dame, being gay was still against the law,” Bourke said. “So the University certainly would not grant any kind of recognition or resources to a gay student group. But that doesn’t mean we didn’t have one.”

Bourke was an active member of the Gay Students of Notre Dame (GSND), the student-led coalition of gay students throughout most of the ’70s. Under specific circumstances, the group was able to meet freely on campus — Bourke recalled the solidarity and fellowship that formed over shared meals in South Dining Hall.

“Suddenly, I discovered this community that got together every day and had meals together, and they talked and they shared information,” he said. “It was really a wonderful experience for me.”

But in most other instances, GSND’s attempts to organize on campus were met with resistance. In addition to anecdotes of students tearing down informational flyers and the University refusing to provide meeting spaces, Bourke recalled a particular incident of administrative antagonism. In hopes of reaching and recruiting gay students without endangering their privacy, the group set up a “gay hotline” that connected interested students to organizers over the phone, allowing gay students to learn more about the GSND and its events while maintaining anonymity.

But after the group advertised the hotline’s phone number in The Observer, Bourke said his rector shut down the hotline, citing that students cannot use campus phone numbers for “anything like that.”

“It was kind of a harrowing experience for me personally,” Bourke said. “So that was the culture that we had to deal with in 1980 — it was very different from what you all have there now.”

But despite his vivid remembrance of certain details, Bourke said that much of the LGBTQ student experience of the ’70s and ’80s remains unremembered. This ignorance of history, he said, was one reason he chose to write his book — because “a lot of gay history has not been captured.”

“I don’t think a lot of people today appreciate what it was like to be queer in the 1970s,” Bourke said. “I came out in 1976, and lived through a lot of change. I saw the sodomy laws beaten down; I saw the AIDS crisis come and go. And I think a lot of people today, in the gay community, don’t really have an appreciation of that history. So I do think it’s important for people to try to remember — there are other books that are out there, and there are other attempts to capture history.”

Honoring October’s observance of LGBTQ History Month, Bourke will continue his memoir’s promotional tour through a visit to his alma mater, holding a book-signing event in Notre Dame’s Hammes Bookstore on Oct. 1 from 3:30-5:00 p.m.