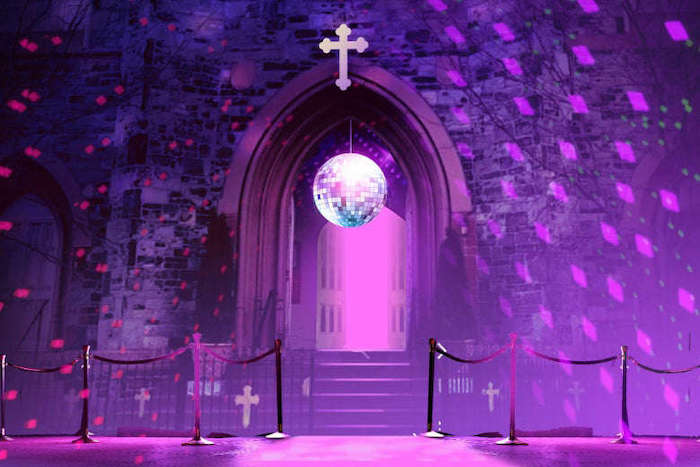 On Tuesday, the New York Times published an opinion piece that declared “New York’s hottest club is the Catholic Church.”

The piece was written by an editor at the stuffy conservative Christian journal First Things, which, under the recent leadership of the Catholic theologian R.R. Reno, has swung toward the reactionary right. The author of the piece, Julia Yost, argued that young, cool intellectuals—bored by the corny politics of their liberal peers—have found transgressive delight in embracing the rituals of traditional Catholicism, along with at least some of its moral stances on sex and gender.

These young edgy reactionaries, she wrote, are associated with the buzzy but mostly nominal downtown Manhattan “Dimes Square” scene. (The name refers to a restaurant in the area.) They have embraced “monarchist and anti-feminist sentiments,” she wrote, and they debate esoteric Catholic topics.

“This is not your grandmother’s church—and whether the new faithful are performing an act of theater or not, they have the chance to revitalize the church for young, educated Americans,” Yost declared.

The writer also didn’t mention that “trad Cath” social media, with all its semi-ironic memes about saints and sacraments, attracts those who like to post winkingly about the Crusades. Or that there is a growing group of traditionalist Catholics, yearning for an old version of the religion before the church took out violently anti-Semitic language from its liturgy, who sometimes tread dangerously close to white supremacy. (Traditionalist Catholics are often defined by their rejection of the teachings of the 1965 Second Vatican Council.)

Just as white supremacists reach back to a fictional version of the Middle Ages or the Viking Age to create their own mythos, the trads look back to an imagined pre-modern church.

Yost is not entirely wrong about Catholicism’s online cultural moment and the “transgressive” appeal of it for the young participants. It’s undeniable that many young trads pride themselves on their intellectual independence from their peers, and on the countercultural nature of the worldview they’ve embraced.

Yost may also be right that Gen Z’s intellectual formation in the waters of social media could naturally make the aesthetics of Catholicism more tempting. Catholicism, in an artistic sense, is nothing if not dramatic. It’s gold and lace. It’s incense and violence. It’s martyrs and marble and blood. (Or at least, the theatrical version of it is. Pope Francis has urged the church to drop its obsession with “grandma’s lace.”)

But Yost tries to push the argument further than it really goes. Young trads may think they are being transgressive, but that does not mean that they genuinely are. There are some 50 million Catholics in the U.S., and there’s no denying the influence the religion has had in shaping the country: Just look at its role in the reasoning of the justices who overturned Roe v. Wade. The Met’s “Heavenly Bodies” theme, Yost argued, was chosen because “Catholicism pairs well with transgression.” Are we sure it’s not because of the centuries of religious artwork? The opulence of the church’s vast historical wealth? Or of the slight thrill of sacrilege, rather than the appeal of traditionalism?

This line of the piece was intriguing to me: “The scenesters of downtown Manhattan may simply find it less dreary to shame one another for fornication than for bearing privilege.”

But Yost tips her hand when she implies that these young people have been, essentially, forced into this position by the failures of secular society. “Disaffection with the progressive moral majority—combined with Catholicism’s historic ability to accommodate cultural subversion—has produced an in-your-face style of traditionalism,” she writes. “By disparaging traditional gender roles and defining human flourishing in meritocratic terms, progressive moralism militates against young people’s attainment of basic goods: marriage and procreation.”

It’s this—more than describing the fashion of any sort of scene, real or imagined—that matters here. The traditionalists are not all harmlessly “larping.” Many are campaigning, sometimes quite vehemently, for the stripping of rights from women and queer people

Yost knows this. Her arguments about the church’s “chance to revitalize the church for young, educated Americans” makes assumptions based on the specific philosophy First Things represents. To conservative Catholics, there is a clear strategy to survive this crisis point in the church’s history: embrace tradition, embrace aesthetics, embrace black-and-white morality and discipline to give clarity in a tumultuous and confusing time. Pope Francis’ strategy is the opposite: reach out to the young and disaffected and bend, as much as possible, to the times; embrace the vast diversity of the faith and hope young people are drawn in by compassion

The church in the U.S. is, in many ways, torn between these two philosophies. In New York, the several members of the trad Cath Dimes Square crowd may be the flashiest and most exciting public display of the faith to trend story aficionados—as a journalist, I certainly can’t scoff at a fun trend piece—but there are so many other forms of Catholicism operating in the city, with far greater numbers: Immigrant groups, socialist worker groups, old-fashioned Italian and Irish cradle Catholics. It’s a mistake to overstate the trads’ influence, or even to imply they’re the most interesting story in the Catholic Church right now—especially in New York.

It would also be a mistake, however, to ignore traditional Catholics’ political power. There are degrees to trads. Some are apolitical converts or reverts, who love the “larp” of it, as Yost noted. Some choose to engage more in the church’s political wars than in partisan politics. (Yost nods to the sedevacantists, who typically think Francis is an anti-pope; they may be oddballs, yes, but they are also loud and active on social media). Some—the “rad trads”—are ready to wage the culture wars in American politics, regardless of whose civil rights are thrown under the bus. And extremism experts have been warning about them for some time.

To be fair, Yost writes with some skepticism of this crowd, especially when it comes to their perceived faith. The story links to pieces on “the housewives of white supremacy” and the “awful advent of reactionary chic.” But still, Yost urges the reader not to reject the Dimes Square trad Caths’ practice as inauthentic because “‘authentic’ internal conversion is not a Catholic demand but a Protestant one.” Instead, she says, “what Catholicism requires is adherence to disciplines and dogmas.”

She’s right that we can’t dictate who is and isn’t a Catholic by examining the authenticity of their faith. But she falls short by claiming it is, instead, a matter of rule-following. Scholars will tell you there are many ways to live out any religion, including Catholicism. Polls show that even when it comes to basic dogmatic elements, such as the literal transformation of the Eucharist, many Catholics simply shrug off the official line. Some Catholics choose to draw inspiration more from biblical teachings on tolerance and compassion. Catholics, like nearly all Christians, have chosen which elements of the faith to live by. Yost and the First Things crowd highlight a militant and rigid version of that choice, declaring it the church’s promising future.