There’s a delicious rebellion brewing in Washington state — the “other Washington,” as those of us based in D.C. like to say. 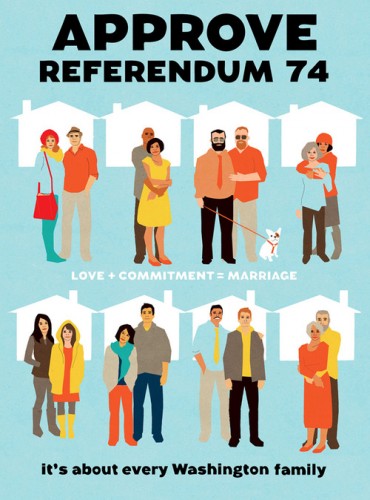 A group of 63 former Roman Catholic priests, with a total of 800 years service, supports Referendum 74, a ballot initiative that would make Washington the seventh state in the nation to legalize marriage between same-sex couples. The announcement of their support is designed to combat a church campaign against the measure that the San Francisco Chronicle describes as “aggressive.”

The church is issuing pastoral statements and releasing videos urging parishioners to vote against marriage equality.

— Bishop Joseph J. Tyson of the Diocese of Yakima, Wash., told his 41 parishes: “Once marriage is redefined as a genderless contract, it will become legally discriminatory for public and private institutions such as schools to promote the unique meaning of marriage. … This law will challenge our right to educate about the unique value of children being raised by his or her own mother and father in a stable home (sic).”

I understand why the church is undertaking an extensive political campaign against gay marriage. There’s no doubt that gay marriage goes against the very biased doctrinal interpretation of homosexuality often cited in the New Testament.

But if members of the Catholic hierarchy are worried about losing followers to other Christian churches, or want to capture the hearts of the next generation of Catholics, they’ll give up the fight.

It’s clear that young Americans of all faiths have been raised in a cultural environment that views LGBTQ couples as no different than heterosexual couples. The bishops are picking a fight over an issue they are not going to win.

The Chronicle sites a recent Elway Poll that pegged support for Referendum 74 at 57 percent. Gov. Christine Gregoire, a Democrat and an outspoken proponent for it, championed same-sex marriage legislation through the state chambers.

Similar measures are on the ballot in Maryland and Maine.

The church is taking on not just Catholic voters in those states or, one could posit, in the United States — Gallup poll last May on gay marriage showed half of Americans support it.

Ireland’s former president, Mary McAleese, this week told Irish state broadcaster RTE she supports gay marriage. Her views on social issues have drawn the ire of many an archbishop, including the former Archbishop of Boston Bernard Law, who called her “a very poor Catholic president.”

Her response: “I am not a Catholic president, I’m president of Ireland,” where “there were all sorts of people. I’m their president. I happen to be Catholic.”

It seems unwise for the church to take on such powerful politicians and social movements that are gaining mainstream support. The timing is particularly unwise when one takes into account how the church’s handling of the priest pedophilia scandal cost it credibility.

I am in awe of the gay rights movement’s progress on this issue. It seems LGBTQ leaders have been able to turn around public opinion on marriage equality in less than a decade. Too bad their sisters in the abortion-rights movement have not been as successful. Abortion is one topic on which the church, sadly, can keep up a successful crusade. But the church undoubtedly has a dwindling supply of social issues in its arsenal.