Ya can’t help but feel a little sorry for old Francis. He’s been without for so long, he’s forgotten some of the fundamentals of the old in and out. Besides, what about all those heterosexual couples who are married, but who are unable to have children. Is he questioning their marriage too?

When Illinois legislators approved civil unions last year, gay-marriage opponents turned to Scripture and church teachings to explain their resistance. But with state lawmakers poised to consider approval of same-sex marriage, Roman Catholic bishops and other advocates of traditional marriage have changed their tack.

They say church teaching has nothing to do with it; gay marriage simply violates natural law. 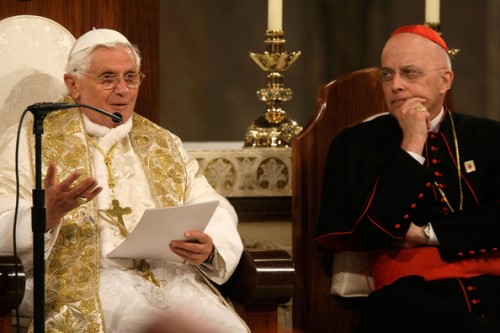 “Marriage comes to us from nature,” Chicago’s Cardinal Francis George said in a recent interview. “That’s based on the complementarity of the two sexes in such a way that the love of a man and a woman joined in a marital union is open to life, and that’s how families are created and society goes along. … It’s not in our doctrine. It’s not a matter of faith. It’s a matter of reason and understanding the way nature operates.”

State Sen. Heather Steans and state Rep. Greg Harris, both Democrats from Chicago, could introduce the Religious Freedom and Marriage Fairness Act to legalize same-sex marriage as early as this week. Steans has said she and Harris will not put the legislation up for a vote unless they believe it will pass the current General Assembly. A new set of lawmakers will be sworn in Jan. 9.

George figures the bill’s introduction has some “inevitability to it now,” but he’s dismayed that natural law largely has been left out of the public debate.

Supporters of gay marriage call the renewed effort to highlight natural law a clever but disingenuous appeal to the masses.

“On sexual ethics, nature is neutral,” said Bernard Schlager, executive director of the Center for Lesbian and Gay Studies in Religion and Ministry at Pacific School of Religion in Berkeley, Calif. “We’re moral beings. We may look to nature for some aspects of how we are in our lives, but we answer to a higher standard. Sexual behavior is an expression of human love.”

According to the tradition of natural law, every human being must seek a fundamental “good” that corresponds to the natural order to flourish. Natural-law proponents say heterosexual intercourse between a married man and a woman serves two intertwined good purposes: to procreate and to express a deep, abiding love.

“You want to be sure that everybody has a chance at happiness. That’s a very persuasive argument,” George said. “But we all want that, and nobody should be disdained or persecuted because of their sexual orientation. … But when we get behind the church and behind the state, you’ve got a natural reality that two men or two women … cannot consummate a marriage. It’s a physical impossibility.”

Though some have argued that a basic tenet of natural law is equality, the Rev. Robert John Araujo, a law professor at Loyola University Chicago, said same-sex couples are not equal to heterosexual couples. Objective intelligence demonstrates that heterosexual couples have the capacity to populate the planet and same-gender couples do not, he said.

“It is this very intelligence that is at the core of the natural law upon which the cardinal is relying when he asserts that the marriage question is not restricted to religious concerns but is also of concern to the natural-law legal reasoning that gave us the American republic,” Araujo said.

“They quickly saw biblical marriage wasn’t going to work,” she said. “It doesn’t work for me because you’re still depending on one person or some group of people’s interpretation of natural law. When you look at the history of marriage, there are many ways marriage has taken shape over time.”

Christopher Wolfe, a professor emeritus of constitutional law at Marquette University who now serves as the co-director of the Thomas International Center, a Raleigh, N.C., institute devoted to the teachings of Thomas Aquinas, said natural law plays a role no matter what side of the debate one takes.

“Everybody’s argument on marriage comes down to some kind of natural-law argument,” Wolfe said. “But there are differences as to what that nature is. Are children central to it or not?”

He argues that children should indeed be central.

Polling by the Public Religion Research Institute has found that most American Catholics support legal recognition of same-sex relationships.

Though that might be true of parishioners, the church hierarchy is of one mind and speaks the truth, according to Robert Gilligan, executive director of the Catholic Conference of Illinois, the church’s lobbying arm in Springfield.

“The reason we’re vocal about laws that unite more than a man and a woman in marriage is it’s incompatible with human nature,” he said. “We’re talking to more than people in the pews. This is something that pertains to believers and nonbelievers.”

One Reply to “Gay marriage vs. natural law”