A Dominican friar, Fr. Adriano Oliva, has celebrated the 800th anniversary of his religious order with a book about “the Church, the divorced and remarried, and homosexual couples.”

Amours (“Loves”) is a study of St Thomas Aquinas’ definition of love and aims to show that the “Angelic Doctor” recognized the “natural” character of homosexuality. In the wake of the Synod on the family, Oliva pleads for new ways of welcoming divorced and remarried and homosexual couples into the Church and of recognizing their unions in civil law.

His editor, the “editions du Cerf” publishing house, is the historic Dominican editor in France, founded at the request of Pope Pius XI in 1929. It still functions under religious supervision.

“The highest of friendships: this is how St Thomas Aquinas calls the unique, faithful and gratuitous love between two spouses who give themselves to each other in consecrated union, as a sacramental sign of the love of Christ for the Church, His spouse. Should couples who are divorced and remarried, who live out their union in a responsible manner, be banned from this friendship? Could it be that homosexual persons, who live as a couple with responsibility, be banned?” reads the text accompanying the book on the Cerf’s web-shop.

It goes on: “Does a theological assessment of the ‘naturality’ of the homosexual inclination, which St Thomas recognizes, not open the doors to new ways of welcoming same-sex couples within the Church? The anthropology of ‘naturality’ then demands that civil rights be accorded to such couples in national legislations.”

Besides putting homosexual unions on a same plane with conjugal unions, Oliva’s argument would imply no State should have the right to refuse recognition to same-sex couples: an extreme standpoint, that goes even further than notoriously liberal Human Rights Courts across the world.

That a Dominican friar should promote such scandalous propositions is in itself a sign of the times. 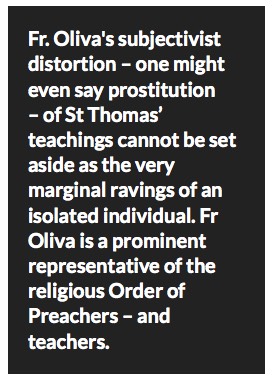 Fr. Adriano Oliva is works as a researcher for the State-run CNRS in France (National Center for Scientific Research) at the “Laboratory of Monotheistic studies. But he is also a doctor in theology, a historian of medieval doctrines, and president of the Leonine Commission founded by Pope Leo XIII in Paris in 1880 in order to publish or republish critical editions of St Thomas Aquinas’ work and to “restore his golden wisdom.”

Dominicans from all over the world are associated with this prestigious institution, whose aim is restore the knowledge of one of their wisest predecessors in the very town where he taught and lived. Oliva also presides the “Bibliothèque thomiste” collection of the Parisian academic editor, Vrin.

Oliva’s book was published and is being promoted in that context, as a genuine or at least noteworthy interpretation of St Thomas’ work. “This essay accompanies us into the complexity of the most authentic theology, with the intent of promoting the Gospel of mercy and the tradition of the Church,” comments the Dominican editor of the book.

Adriano Oliva clearly wants homosexual couples to be “welcomed within the heart of the Church, and not at its periphery,” “totally integrated in full communion with the Church”.

Catholic philosopher Thibaud Collin explains that Oliva bases his reflection on the fact that “counter-natural pleasure” can exist, either because of a corruption which comes from the body (“finding sour things sweet because of fever” for instance), or which comes from the soul, “such as those who, from habit, find pleasure in eating their fellow man, in having relations with animals or homosexual relations, and other similar things which are not according to human nature.”

From this Oliva deduces the thesis according to which “St Thomas places the principle of pleasure in sexual unions between persons of the masculine sex as coming from the soul and not from the body, where he had placed venereal pleasure, on the other hand.” He then proceeds to declare: “St Thomas considers homosexuality as an inclination that is rooted in its most intimate part, the soul, from where affections and love are expressed.” 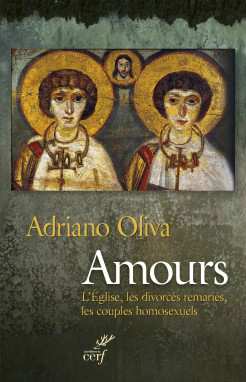 This leads him to affirm that it is necessary to distinguish between homosexuality and sodomy which is practiced for the sole aim of gaining pleasure. “For this singular person, homosexuality cannot be considered as being against nature, even though it does not correspond with the general nature of the species,” writes Oliva, who considers this general nature not as a reality but as an abstraction.

For these people, therefore – reasons Fr Oliva – as homosexuality is constitutive of the very nature of their soul, moral virtue consists for them in living out their inclination according to the demands of their humanity: in unique, gratuitous, faithful and “chaste” love. And the Church must accompany them in their love for a person of the same sex in which they “accomplish” themselves. Sexual acts, in this context, are rendered morally legitimate by the criterion of “love” between homosexual persons, in the same way as happens between heterosexuals.

(One wonders why cannibals were not so similarly vindicated.)

Thibaud Collin has published a scathing response to the sophistic reasoning of the Dominican friar. In the first place, he questions, why should “monogamy,” either homosexual or heterosexual, be a criterion of virtuous love inscribed in the nature of the human person? Couldn’t it be argued that “polyamorous” inclinations are also for some persons in the very nature of their souls? “It is quite foreseeable that some time in the future another cleric will stigmatize the polyphobia of such a position,” argues Collin.

Several fallacies are present in the statements that homosexuality is connatural to the individual and that its finality is the virtuous love of another person.

In the first place, Oliva leaves aside the fact that St Thomas speaks of a “corruption” of the natural principle of the species which leads the human person to be orientated towards a person of the opposite sex, an orientation that allows human life to be transmitted in the sole framework that is fitting to its dignity: marriage, says Collin. Contrary to what Oliva writes, St Thomas does not designate the origin of this corruption as being in the soul but in “habit”: an acquired disposition that becomes a “second nature”. This “habit,” in opposition to mere biological processes, is “on the side of the soul” because “only the potencies of the soul can be disposed by the repetition of identical acts that create a habit.” The same could be said of drug abuse or any other addiction.

In the case of counter-natural sexual pleasure that an individual experiences as connatural, St Thomas considers it to be rooted in a habit that is against reason: which is defined as a vice, a disposition to what is evil, explains Thibaud Collin. St Thomas, in the text quoted by Oliva, is describing the non-natural pleasure some people experience as being natural in an act that is opposed to human nature and therefore to the objective good of man – in this case sodomy – without looking for the source of a psychological type that 19th century psychiatry would later end up calling “homosexuality”.

The second main point of Oliva’s reasoning in view of legitimizing homosexual unions is that this inclination should be accomplished in faithful love that pastors should bless and support: “A homosexual couple has a fundamental right to form, because homosexuality is a constitutive component of the individualized nature of two individuals who unite in natural and in some cases in supernatural friendship,” writes Oliva. Blessing such couples would help them on their “way in fidelity.”

Thibaud Collin comments: “Here, there is confusion between true friendship and sexual and affective attraction.” When Oliva argues that homosexuality, being rooted in the soul, should also express itself and be lived out in the body, he is contradicting the whole of St Thomas’ teaching on natural moral law and the virtues.

Fr. Oliva, in fact, replaces “truth” with “sincerity”: moral truth shows a person’s reason the good that should be accomplished by his free acts, that is proper to human nature as God created it, explains Collin, indicating that Oliva reasons inversely: “For him, natural law ends up by adjusting to an individual whose natural principle is distorted, according to St. Thomas.”

Oliva quotes St Thomas as saying that walking on one’s hands, even though hands are made for another physiological use, is to commit a “small sin,” or even “no sin at all,” in order to justify “using the sexual organ in a relation with the same sex in the context of true homosexual love, unique, faithful and gratuitous.” He even founds his statement on Humanae vitae, concluding that one must answer, “without hesitation,” that “nothing” opposes such a justification. Sodomy would only be wrong if it is experienced without love: “Accomplished with the love that springs from the soul, informed by the soul, such an act will comprise no sin,” writes Oliva.

His subjectivist distortion – one might even say prostitution – of St Thomas’ teachings cannot be set aside as the very marginal ravings of an isolated individual. Fr Oliva is a prominent representative of the religious Order of Preachers – and teachers. His book was accepted by a Catholic editorial team: the Dominicans’ own publishing house. It is available to all on the Cerf’s website, with warm recommendations.

The radio station of the archbishopric of Paris, Radio Notre Dame, includes a conference by Fr. Oliva on its website agenda: the conference itself will take place in a Parisian library in partnership with the Society of St. Paul. The poster for the conference speaks of Oliva’s “tour de force” in referring to the doctrine of Thomas Aquinas “in order to put two questions under debate at the Synod on the family” – divorced and remarried and homosexual couples – “under a new light,” by “returning to the definition of love given by the saint as the greatest form of friendship.”

Interestingly but not surprisingly, this sort of reasoning was invoked in substance by Vatican priest Krzysztof Charamsa, who said on the occasion of his “coming out” just before the Synod: “The Bible says nothing about homosexuality. It speaks of acts that I would call ‘homogenital’. Even heterosexuals can commit such acts, as often happens in prisons, but in this case they act against their nature and so commit a sin. When gay persons engage in such acts, on the contrary, they express their nature. The sodomite of the Bible has nothing to do with two gays who love each other in Italy today and who want to marry. I have not managed to find a single passage, even in St Paul, which can be interpreted as relating to homosexual persons who demand to be respected as such, as at the time the concept itself was unknown.”

This is substantially what Adriano Oliva is saying. And while Charamsa was promptly suspended from all his priestly and magisterial functions for having confessed that he was unfaithful to his commitment to celibacy, a religious like Oliva is allowed to theorize on “homosexual love” with what looks like the blessing of his Order.

In the same way, this rooting of homosexual orientation and “love” in the soul is a manner of making individual and subjective conscience the measure of moral good. This heresy is also at the heart of present false “debates.”

We must surely expect to see more of the same in the months and years to come.