A few days ago he was accused by a 19-year-old boy.

He was found hanged in the courtyard behind the Church of Santa Chiara, located in the “La Cisterna” district of Santiago del Chile. 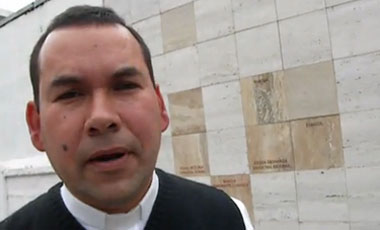 The name of the 45-year-old Chilean priest was Allendes Rodrigo Munoz.

He was accused of alleged sexual abuse by a 19-year-old boy, local media reported.

Shortly after the corpse was found, the Episcopal Conference posted on Twitter: “the Vicar of the southern are of the capital city has received a complaint of sexual abuse against Don Rodrigo Allendes.”

Jaime Coiro, the spokesman for the Episcopate, could not say when the crime had allegedly been perpetrated.

According to press reports, however, the police had already known that the youth’s family was about to file the complaint since the beginning of the month.

On May 12th, another priest, Luis Eugenio Silva, knowing well the Chilean media, had tried to commit suicide before their “version” of the his alleged sexual abuse could be released.

The Church denied though, pleading depression for a skin cancer.

Yesterday, three of the four youths who had filed complaints of sexual abuse in 2010 against Father Fernando Karadima, who was well known in Santiago and whose crimes the Vatican condemned, have published a vademecum to prevent these situations from happening again.

For this and other cases, President of the Episcopal Conference Ricardo Ezzati has already asked for forgiveness several times.