What space do homosexuals have within the Catholic Church? Ten years after the law on same sex civil unions was introduced in Germany on 1 August 2001, the question divides German bishops. On the one hand there are those who, like the Archbishop of Munich and Freising, Reinhard Marx, is convinced that homosexuals “are part” of the church community and are also welcome to work in the parish. On the other hand those who, like Franz-Josef Overbeck, who besides being the Bishop of Essen is also the military Bishop of the Bundeswehr, believes that homosexuality is “a sin.” 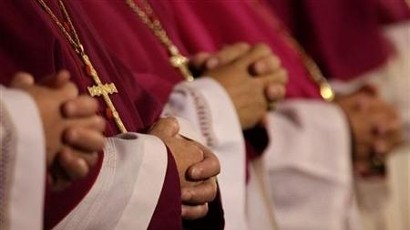 “All who want to participate, open up to the Gospel and join the community of the Church, are welcome,” Marx said, in an interview with Süddeutsche Zeitung. “I cannot bless a gay relationship, but I can pray for people who request it. It would be a big step if each were integrated, but this has not yet been achieved everywhere,” he explained, admitting to mistakes the Church has made in the way it has dealt with homosexuals so far: “the Church has not always adopted the right tone.” A phrase which can also be seen as a self-criticism: a few weeks ago, at the first meeting of the so-called “Dialogue Process” on the future of the Church in Mannheim, Marx had spoken, referring to homosexuals, as ” failed people.” A phrase that had raised criticism and which the Archbishop later corrected. In his interview with the Süddeutsche Marx, however, reaffirmed the Church’s position that sexuality must be considered part of marriage between man and woman.

Overbeck, who at 47 is the youngest Bishop of the Catholic Church in Germany, has shown a different approach. “Homosexuality is a sin,” he said in April 2010 in a talk show on German public television conducted by the well-known journalist Anne Will (a declared homosexual). Since then, his position has not changed. On that occasion, Overbeck recalled in an interview with the Süddeutsche Zeitung published two days after the interview to Marx, “I expressed what the conviction of the Catholic Church is: practiced homosexuality is objectively sinful, even if gay people must be treated with respect.” Overbeck recalled having discussed in the Bishop’s residence with several representatives of gay and lesbian associations. In the end, he recalls, “we did not reach an agreement.”