I’ve witnessed sexist attitudes in two professions – as an engineer and as a priest.

They have some similarities. In both spheres, one of the arguments is “we have never employed women to do this before” and another is “it isn’t that women are not equal – they just have different roles”. 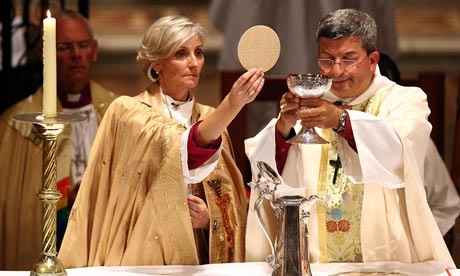 In both professions, I’ve listened to the reasoning and it often boils down to fear of change.

However, there are some significant differences in the way sexism presents itself in the factory and the church.

In the factory, in the 1990s, sexism took several forms.

The most oppressive was the wall-to-wall pornography, which intimidated me – the women were treated by the men as objects, sub-human.

Then there was the wolf-whistling, which was frightening.

Occasionally, the men in the factory would “down tools” and whistle at me – 100 of them.

Colleagues would tell me that it was inappropriate to be a female engineer – women weren’t made for such jobs, and it interfered with the natural order of things.

Although these events were difficult, it was possible to manage well as a woman in the secular workplace, because the structures were not sexist.

So I knew that the law of the land entitled me to work as an engineer, and that the procedures of our company demanded equality.

Furthermore, almost all of the managers, and especially the managing director, were enthusiastically committed to equality.

When co-workers told me that a woman should not be an engineer I either suggested that they judge me on my work rather than on my gender, or encouraged them to talk to the managing director, knowing that he would give them short shrift.

The Church of England is different, because the sexism is institutionalised, and that makes it more oppressive.

Parishes can vote to opt out of discrimination legislation, and this compromises the whole church, as sexism is seen as tolerable.

In fact, we aren’t meant to call prejudice against women “sexism” at all: it is meant to be called “legitimate theological difference”.

For me, if it walks, swims and quacks like prejudice, then it is prejudice.

Sometimes people think that religion grants us a “get out of jail free” card when it comes to unethical practices.

I see this as a perversion of the radical equality that we find in the gospel of Christ. I am grieved that the church, of all institutions, is the one that compromises justice and equality.

When people say that they don’t want a female priest, because it makes them “feel odd”, I can’t respond by saying that the institution of the church supports the equality of women.

It is also difficult to say “judge female priests on what we do, not on our gender”, because “being” rather than “doing” is a large part of priesthood. Fortunately, the vast majority of churchgoers are not sexist and my own bishop couldn’t be more supportive of equality.

In fact, I notice institutional sexism much more frequently than sexist attitudes among individuals.

Other than the obvious bar on women being bishops, there are day-to-day events.

For example, in some places, if a woman presides at the Eucharist, her name is published so that those who wish to avoid her “taint” can do so.

Another example is in appointments: when I was interviewed for a post, some of the interviewers panicked because they hadn’t foreseen the possibility that a woman might interview well.

My experience of secular life is that these things would be utterly unacceptable – illegal, in fact.

A depressing statement that I heard on this topic recently was at the press conference announcing the appointment of the two new “flying bishops” (bishops who oversee those who will not accept the priestly ministry of women).

Rowan Williams said the flying bishops would be a permanent fixture in the Church of England, even though the draft law on women bishops does away with the positions.

Williams said: “I have two new suffragans and General Synod can’t simply take them away. The pastoral need will not go away.”

Imagine if we were talking about black priests and Williams had said: “Racism is a permanent fixture of the Church of England. The pastoral need to care for priests who do not accept the ministry of black people will not go away.”

I’m afraid sexism runs deep in the Church of England, but I hope it won’t be permanent.