No, Pope Benedict didn’t really say that, but there are really interesting developments coming out of this trip for World Youth Day. Thanks to Bridget Mary’s blog for alerting us to these developments.

The poster below was to have appeared on billboards and buses across Spain, until municipal authorities, bowing under pressure from the Cardinal of Madrid, rescinded the permission. 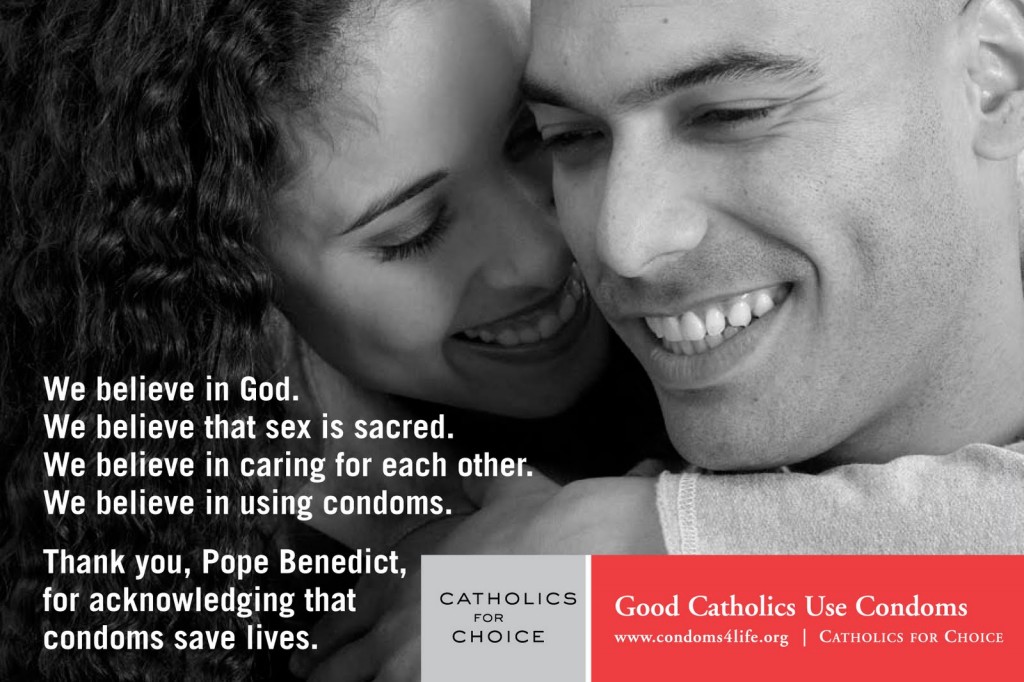 Maybe it’s just me, but there is something amusing about the way Catholics for Choice have taken Benedict’s quite timid and tentative statement last year (If condoms are not “a real or moral solution … in this or that case, they can be nonetheless, in the intention of reducing the risk of infection, a first step in a movement toward a different way, a more human way, of living sexuality.”) and run with it all the way to the goal post. Maybe this is the way change always comes to the church, timidly at first, with many reversals, fits and starts. Of course, as you can see from the press release below, Catholics for Choice’s ingenious plan to place their slogan – Good Catholics Use Condoms – on billboards and buses throughout Spain during the Pope’s visit, first met with approval, then censorship, thanks to the intervention of Cardinal Antonio Ruoco of Madrid.
FROM CATHOLICS FOR CHOICE BLOG
POPE ARRIVES IN SPAIN AMID CENSORSHIP CONTROVERSY
International Youth Coalition Seconds Archbishop’s Affirmation of Freedom of Expression
The World Youth Day 4 All coalition welcomed the remarks from Archbishop Braulio Rodriguez of Toledo, Spain, who pointed out that the Catholic World Youth Day celebration is taking place in a country where freedom of expression is protected.

“Spain’s openness to freedom of expression is something Catholics for Choice took for granted when we arranged, months in advance, for the display of our Condoms4Life ads in Madrid’s transit system to coincide with World Youth Day,” said Marissa Valeri, a lead organizer of the coalition. “We were surprised, then, when the message ‘Good Catholics Use Condoms’ was deemed too offensive for Madrilenos. In reality, the best interests of the public was not the issue. Instead, it was a move made by ultraconservatives to stifle the many diverse voices of Catholics at World Youth Day, which should be a place where, as Archbishop Rodriguez affirmed, ‘we can all say what we want to say.’

The municipal authorities did a disservice to all visitors and to all Spaniards by stepping between the life-giving message that condoms save lives, on the one hand, and the individual’s right to make up his or her mind about that message, on the other.”

Condoms are apparently not the only topic that is too hot to handle in Madrid this August. Patrons at the Madrid public library have allegedly complained they were unable to access Web sites providing information on protests being organized against World Youth Day.

One of the hallmarks of the Catholic tradition is unity in diversity. Like the World Youth Day 4 All coalition, the event itself is made up of participants from all over the world, people who may speak different languages and come from different cultures, but who find kinship on the level of faith. The church hierarchy obviously feels that Spain’s respect for freedom of expression gives them room to express their viewpoint—Archbishop Rodriguez even decries those who think that certain points of view are “more right than others.” Spain’s civic freedoms should be able to include the voices of the Catholic people—including those who support the use of condoms—as well as the perspectives of non-Catholics. Otherwise, the “world” part of World Youth Day goes missing, and those from a tiny, easily ruffled minority within the Catholic hierarchy and the Spanish authorities are the only ones celebrating.

Luckily, diversity is not so easily squelched—the Condoms4Life message has been making headlines all week (see the blog, and pilgrims have encountered stickers and projections on walls around the city.