On Bloody Sunday in 1972 Father Edward Daly faced down the Parachute Regiment responsible for shooting dead 13 unarmed Derry civilians, waving just a white handkerchief as he protected the wounded from the army’s bullets in the Bogside. Now 39 years later the retired Bishop of Derry is confronting an even more powerful force than the Paras: the Vatican. 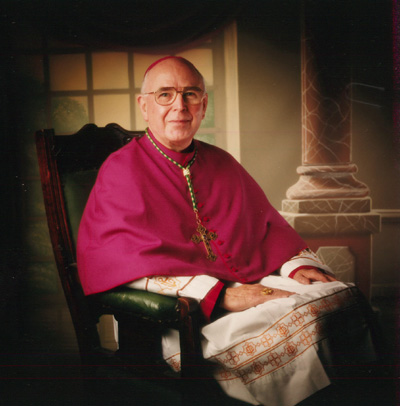 Dr Daly, who was the Bishop of Derry for 20 years during the Troubles, has become the first senior Irish Catholic cleric to call for an end to celibacy in the church. His intervention in the debate over whether priests should be allowed to marry is highly significant because he is still one of the most respected figures in the Irish Catholic church at a time when faith in the institution has been shattered by the paedophile scandals involving clergy.

Challenging centuries of Catholic theocracy, Daly has said that allowing the clergy to marry would solve some of the church’s problems.

The number of Catholic priests in Ireland is in sharp decline as older clergy die and very few young men take up a celibate life. In some parishes the church has transferred priests from Poland and the developing world to fill the gap.

“There will always be a place in the church for a celibate priesthood, but there should also be a place for a married priesthood in the church,” Daly writes in his new book A Troubled See, Memoirs of a Derry Bishop, which will be launched at Magee College in the city on Wednesday.

“I think priests should have the freedom to marry if they wish. It may create a whole new set of problems but I think it’s something that should be considered,” he says.

“I’m worried about the decreasing number of priests and the number of older priests. I think it’s an issue that needs to be addressed and addressed urgently.”

While Daly accepts he might be out of step with current Vatican thinking he points out that he is “not engaged in a popularity contest”.

He says that during his time as a bishop he found it “heartbreaking” that so many priests or prospective priests were forced to resign or were unable to get ordained because of the celibacy issue.

Many young men who once considered joining the priesthood turned away because of the rule, the 74-year-old cleric argues.

Daly became a recognised figure around the world in 1972 when he was seen waving a bloodied white handkerchief in front of British paratroopers in Derry during Bloody Sunday.

The sight of the priest during the army massacre in the city became one of the most iconic images of the Northern Ireland Troubles.

Daly was also a fierce critic of the IRA’s armed campaign and a strong supporter of the peace process kickstarted by the likes of his friend and confidant, the Nobel peace prize winner John Hume. In the book the former bishop praises Hume who he says is “one of my great heroes”.

He had first-hand experience of the Battle of the Bogside in 1969 and took part in the civil rights demonstrations in the city prior to the Troubles erupting. Daly also played a part in the campaign to free the Birmingham Six. His tenure as Bishop in Derry spanned the years 1974 to 1993 and included some of the worst atrocities of the Troubles.

He accepts that admission of married men to the priesthood could well create new problems and issues for the church.

“However, under the guidance of the Holy Spirit, major decisions must be made,” he adds.

In his book he also denounces the paedophile priests whose crimes and the cover-up by the Catholic hierarchy has dramatically reduced the church’s respect and influence in Ireland. He is “heartbroken and appalled” that fellow clergymen were engaged in “such horrible criminal acts against the most vulnerable”.

Catholic priests have been unable to marry since the Gregorian reforms in the 11th century made celibacy compulsory. Historians have contended that the move was partly for spiritual reasons, but was mainly to ensure estates held by clerics would pass back to the church upon their deaths rather than to offspring.

However, in recent years Pope Benedict XVI has made allowances for married Anglican ministers to transfer to the Catholic church after a number made the move in protest at controversial Anglican issues including the ordination of women priests, and acceptance of ministers in same-sex relationships.

The County Fermanagh-born cleric now works as a chaplain in Derry’s Foyle hospice.

Bishop Daly’s proposal will meet with dogged silence in the Vatican, but widespread understanding in the Roman Catholic church.

The view from the top is clear. Last year, when the scandal over clerical sex abuse was at its height, the archbishop of Vienna, Christoph Schönborn, suggested part of the problem might be priestly celibacy. His comment was all the more interesting, coming as it did from a conservative theologian andformer star pupil of Pope Benedict. But in case anyone thought his musings had Vatican backing, the pope went out of his way a few days later to praise celibacy as an “expression of the gift of oneself to God and others”. Three months later, he reinforced his defence of the status quo, describing celibacy as a “great sign of faith”.

The debate over whether to admit married men to the priesthood, however, is one not even the pope can stifle. Two developments have refocused attention on the issue in the last couple of years – and one is partly attributable to Benedict himself. The first is the continuing sex abuse scandal, which on Tuesday acquired new life when the US-based Survivors Network of Those Abused by Priests asked the international criminal court to investigate the Vatican for crimes against humanity. The first senior figure to argue the case for a link between an unmarried priesthood and sex abuse was the bishop of Hamburg, Hans-Jochen Jaschke, who in March 2010 told a newspaper interviewer a “celibate lifestyle can attract people who have an abnormal sexuality”.

The other development has been the welcoming into the Catholic church of traditionalist Anglicans, unable to reconcile their faith with the ordination of women or the consecration of openly gay bishops. Their incorporation has been made easier since October 2009 when Benedict issued a controversial ordinance allowing them to retain much of their identity, liturgy and pastoral arrangements.

The reordination into the Catholic church of married Anglican priests has pointed up the fact that priestly celibacy is not a doctrine, but a discipline. In 1970, the decline in priesthood vocations persuaded nine leading theologians to sign a memorandum declaring that the Catholic leadership “quite simply has a responsibility to take up certain modifications” to the celibacy rule. Extracts from the document were reprinted in January. Not least because one of the signatories was the then Joseph Ratzinger, now pope Benedict.