Pope Benedict’s visit to his German homeland was bound to provoke harsh words from his critics. The surprise of the event was how bluntly he took his own Church to task and disappointed Protestants ready to work with him.

Despite his frail physique and soft-spoken style, the 84-year-old pontiff delivered a vigorous defense of his conservative views and brusquely rejected calls for reforms, some of which even had cautious support from some bishops. 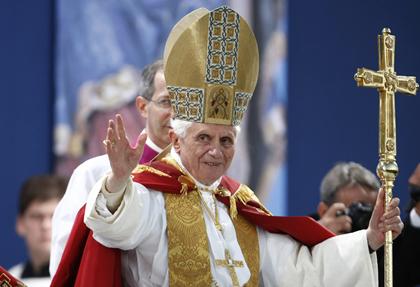 At the end of his four-day visit on Sunday, Benedict predicted “small communities of believers” would spread Catholicism in future — and not, he seemed to say, the rich German Church, which he hinted had more bureaucracy than belief.

Some Church leaders fear they may end up with only small communities if they don’t consider reforms. Record numbers of the faithful have officially quit the Church in recent years, often in protest against clerical sex abuse scandals.

“The pope was demanding, almost hard — not in his manner, but in the essence of his words,” Berlin’s Tagesspiegel daily commented. “Nobody should be fooled by his fragility.”

“The pope sees the signs of the times, but interprets them not as a demand to courageously open up the Catholic Church but, on the contrary, to close its ranks.”

Breaking down faith barriers is a major issue in the land of the Protestant Reformation. Christians are equally divided between Catholics and Protestants in Germany and intermarriage and ecumenical cooperation make both sides ask why old divisions still exist.

Politicians from President Christian Wulff down publicly told the pope they hoped his visit would help to bring the churches closer. One suggestion was to allow Protestant spouses of Catholics to take communion when they attend Catholic mass.

Benedict made a historic gesture for interchurch unity by presiding over a prayer service with a Protestant bishop in the Erfurt monastery where the 16th-century reformer Martin Luther lived as a monk before he split with Rome.

But in his speech to Protestant leaders there, he bluntly told them they were mistaken to expect him to come bearing gifts, like a political leader coming to negotiate a treaty.

His hosts, who would have been happy with vague words about the need to look into some problems, instead heard a short lecture about how Christian faith could not be negotiated.

Benedict’s Protestant host in Erfurt, Bishop Nikolaus Schneider, stressed the bright side of the meeting — the pope’s positive words about Luther’s deep faith — and added: “Our heart burns for more, and that was clear today.”

The lay Catholic group We Are Church said the faithful should stop hoping for help from Rome. The churches in Germany should simply “declare the unspeakable 500-year-old split in Christianity to be ended,” it said in a statement.

“Let’s do what unites us,” it declared.

Catholics weren’t spared either. Another reform proposal was to allow Catholics who divorce and remarry to receive communion at mass, something now barred to them because the Church upholds the sanctity of the first marriage.

Even Archbishop Robert Zollitsch, head of the German Bishops’ Conference, said before the visit he hoped to see some change in coming years to prevent the rising number of divorced Catholics feeling excluded from the Church.

Benedict passed over that idea in silence.

By contrast, Benedict was loud and clear in criticizing the German Church as too bureaucratic and focused on organizational changes rather than on the zeal of true faith, which he said was the key to confronting its problems.

He told this to the lay Central Committee of German Catholics (ZdK), some of whose members have called for moderate reforms such as allowing women deacons to help at mass or ordaining older married men to counter the shortage of priests.

If a stranger from a far country visited Germany, he told them, he would find it materially rich and religiously poor.

“The real crisis of the Church in the Western world is a crisis of belief,” Benedict said. “If we don’t find a way to really renew the faith, all structural reform will remain ineffective.”

The next day, he repeated this message to a wide range of lay Catholics working with and for the Church. He said they could only face the challenges ahead if they closed ranks with their bishops and with the Vatican.

“It is not a question here of finding a new strategy to relaunch the Church,” he said, but of putting strategy aside and “living the faith fully, here and now.”

ZdK president Alois Glueck was not convinced. “It’s not a question of either promoting introspection and prayer or changing Church structures,” he said. “We have to link both these things.”

Munich’s Sueddeutsche Zeitung, the most influential daily in the pope’s native Bavaria, summed up the trip with the headline: “He came, he spoke and he disappointed.”