Raul Vera Lopez, the Catholic bishop of Saltillo, Mexico has vowed to continue his outreach to the gay community.

The Vatican had summoned the bishop to Rome to inquire about a gay-inclusive group of Catholics headed by Noe Ruiz. 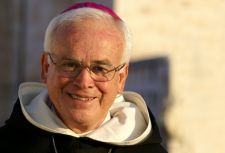 Vera publicly affiliated his diocese with the group and sponsored its film festivals, which lead to harsh criticism from the Peru-based Catholic news agency ACI Prensa.

Vera told El Universal on Sunday that the Vatican had not reprimanded him.
“It is no surprise that the Church supports sexual diversity because there are at least 50 diocese in the United States serving gay communities,” Vera said.
He said that Vatican officials simply made observations about his work, but the bishop did not elaborate.

“I will not abandon these children,” he added, referring to children with gay parents. “We cannot abandon people who depend on us.”

Earlier, Vera chided ACI Prensa, which had claimed Vera supported groups that advocate for marriage between members of the same sex and abortion.
“In the Diocese of Saltillo, we have very clear objectives,” Vera told the Zocalo Saltillo. “We work with [the gay community] to help them recover their human dignity, which is frequently attacked at home and in society, and they are treated like filthy people.”

“Some would like to weaken my work on behalf of vulnerable groups, that is what they want, but I’m going to go ahead in the struggle for human dignity which is the principle of the Gospel,” he added.