Don’t ya just love it? 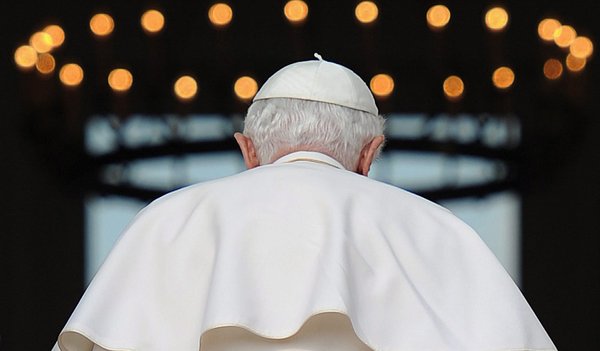 When speaking to the Pope, you may not speak about yourself, and when the meeting is over you may not reveal the contents of the face-to-face conversation. In a papal audience or the brief exchange during the “baciamano,” the Pope must not be asked personal questions – only questions of general interest. To approach him, one must await the ceremonial gesture or the prelate who accompanies the Pope, according to the circumstances. For example, in audiences granted to lay and religious personnel of Vatican congregations, universities, ecclesiastical courts, and pontifical councils (sometimes accompanied by family), the prefect or the president, accompanied by the head of the department, introduces each individual to the Pope, just as the superior of the order or head of a community does when they are welcomed by or are welcoming the Holy Father. The order of presentation and the names admitted to the “baciamano” are arranged with the protocol office of the Secretary of State, then with prefecture of the Pontifical House to ensure compliance.

People in canonically irregular situations may not be received, and therefore cannot appear on the list of guests proposed by the Vatican Secretary of State. For example, an audience was denied to an international personality like Sophia Loren because she was civilly married to a man who was still religiously married in the eyes of the Church. The same applies to those who belong to ancient families of apostates, as in the case of the French spouse of the Queen of Denmark.

The entourages of leaders may not include their unmarried partners or their partner’s relatives. In December 2007 this touched off a small diplomatic incident in the Vatican Palaces, when President Sarkozy tried in vain to bring Marysa Bruni Tedeschi, mother of Carla Bruni, with his entourage so she could meet the Pope.

You must not be the first to speak to the Pontiff. The Holy Father is spoken to only in response to his greeting or one of his questions. You should not come too close to his person. If you are invited to breakfast or dinner (where a tailcoat is obligatory and morning dress is forbidden), you may give the Pope a very important gift, such as a valuable work of art or a considerable donation to one of the Pontiff’s charities, or a more simple gift. For example, St. Josemaria Escrivà de Balague once gave a crate of oranges to Paul VI, who had invited him to breakfast in the papal apartment. This contrasts with the protocol that heads of state or government, upon leaving an audience with the Holy Father, publically express praise and appreciation. The Pope will be judged by history, and so it is considered inopportune and improper to praise him excessively, as an Italian Prime Minister, in an extreme gaffe, chose to do after a private meeting with John Paul II in his private library. As with other monarchs, etiquette (and in Spain it is actually a law) prohibits people from touching the Pope.

The relatives and institutional colleagues of a head of state or government are eligible to be a part of his entourage. In great pontifical ceremonies, such as the recent beatification of Karol Wojtyla at Saint Peter’s, only the Head of Delegation may greet the Pope at the end of the event.

What would Jesus do?