The Rev. Christopher Courtwright-Cox was at the heart of the Roman Catholic Church when he realized that he no longer could be affiliated with it. 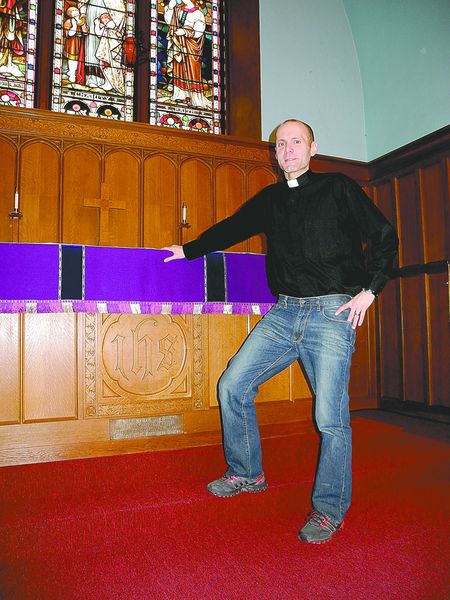 It was at the height of the Catholic priest sex abuse scandal in 2004, and Cox was living in Vatican City. He had just completed his seminary training and been ordained as a deacon.

“I had this growing sense of anxiety and depression while I was over there, and I couldn’t really articulate it,” said Cox. “But when (the sex abuse scandal) happened, to hear behind closed doors the amount of secretiveness and homophobia, and the amount of misogyny within the hierarchy of the church, it dawned on me why I was struggling so much.

“I started thinking about the place of LGBT (lesbian, gay, bisexual and transgender) people in the church,” said Cox, who is gay. “I got to thinking about the place of women in the church, and about divorced people and how they’re not allowed to receive communion. All these things started coalescing for me, and I realized I can’t do this because it’s destroying me and it’s destroying people I care about. So I decided to leave active ministry.”

That decision marked the start of a journey that would eventually bring Cox to Saranac Lake, where he recently founded the Crossroads Catholic Community, billed as an “ecumenical, inclusive, non-judgmental and independent” religious community that still retains most Catholic traditions and practices.

Cox credits the Rev. Ann Gaillard, rector of St. Luke’s Episcopal Church, where Crossroads is renting space for its services, for coming up with the Crossroads name.

“Crossroads worked because St. Luke’s is literally at the crossroads of the community, at the corner of Main and Church (streets), in the heart of the village,” he said. “But it’s also at the heart of what I’m trying to do and what the Old Catholic Church is about, and that is being an ecumenical bridge among all of the Christian denominations.”

The term “Old Catholic Church” refers to a number of Christian churches that originated with groups that split from the Roman Catholic Church over certain doctrines, primarily the belief that the pope can make infallible statements on church doctrine.

Cox’s connection to the Episcopal Church is what led him to try to learn more about the Old Catholic Church. About a year-and-a-half after he left active ministry, Cox was living in Plattsburgh and was approached by a friend who encouraged him to visit an Episcopal church.

“I started attending the Episcopal church to check it out, and I was like, ‘It’s Catholic-lite, but it’s also Catholic right,'” Cox said. “It’s kept all the things about Catholicism that I love: the scriptures, the Eucharist, the priesthood, the ritual, the community. But it got rid of a lot of the moralizing.”

Cox became a member of St. John’s Episcopal Church in Essex. He later moved to Saranac Lake, where he worked as the spiritual director of St. Joseph’s Addiction Treatment and Recovery Centers, a position he held for four years until he recently stepped down. During his time at St. Joseph’s he received his doctorate in pastoral counseling and started work on a master’s degree in theology.

“It was then that I realized, while I was writing my dissertation, the call that’s always really been in my heart, that I want to be in active ministry again,” Cox said. “It was at that time that I brought it up to my spiritual director, and he said, ‘Have you ever heard about the Old Catholic Church?'”

Its services – held Wednesdays and Saturdays at St. Luke’s – are almost identical to those of the Roman Catholic Church, Cox said.

“The only real difference is that in the Eucharistic prayer, the pope is not prayed for as such; he’s prayed for as the bishop of Rome,” he said. “And we have more freedom in our liturgy; it’s not as rigid. We can draw from Orthodox sources, Old Catholic sources, Roman Catholic sources, Celtic sources. But the basic structure is the same: There’s a gathering around the scriptures, a sermon and the liturgy of the Eucharist, where all believers gather around the table to receive the body and blood of Christ.”

Cox says he averages about a dozen parishioners at the Saturday service, but he said he isn’t measuring his success by the number of people who attend.

“If just one person finds healing or finds peace with their own struggles, then that’s enough,” he said.

Crossroads has also been taking its message to the street. Cox, Gaillard and several of the Crossroads Community’s parishioners provided “Ashes to Go” on Ash Wednesday, Feb. 22, outside the Saranac Lake post office and in the Sears parking lot. About 60 people received ashes and blessings, Cox said.

Cox stressed that he’s not out to pick a fight with the Roman Catholic Church and its local parishes, like St. Bernard’s in Saranac Lake.

“What’s unique about this is you are free to come and go,” he said. “You can be a part of this community and still be a Baptist, a Methodist, an Episcopalian, a Roman Catholic – whatever you want. Our object is not conversion. It’s just a matter of belief and practice, and we want to return to what all of Christianity held in common.”

The Rev. Mark Reilly, pastor of St. Bernard’s, was reluctant to speak about the Crossroads group, although he said he is aware of it.

“I think that the idea of that very specific ministry of reaching out the marginalized – it’s a very important one,” she said. “All churches seek to do that, but when you’ve got a different sort of ecclesiastical structure that supports it, that’s a new way of doing things, and that’s what he has.”

Crossroads parishioners like Angela Estes of Saranac Lake are just as enthusiastic. Estes said she grew up in the Roman Catholic Church but became dissatisfied with the church’s hierarchy in the wake of the priest sex abuse scandal and because she said she was “treated differently” when she got divorced.

Estes said she likes the Crossroads Community because “there’s no judgment at all, and the rules are not the same. You can be divorced, you can be gay, you can be a woman priest. It’s just church. It’s wonderful.”