People don’t expect their priests and bishops to lie, but as Michelangelo Signorile’s recent post illustrated, clerics do lie. Some even make a virtue of it. I know this from experience, for I was ordained a Catholic priest on a lie. 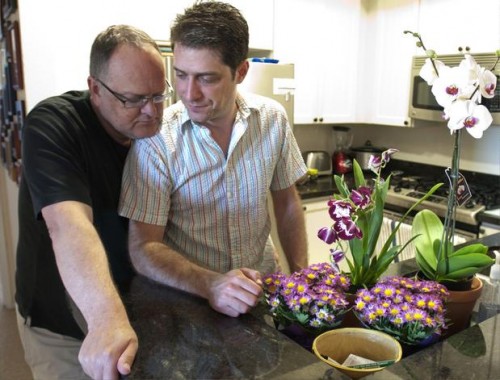 In spring 2002 I walked with my spiritual director along the blacktop road encircling the seminary. He’d been my confessor and guide for two years, helping me discern God’s presence in all aspects of my life, intimate and mundane. Over our heads, a canopy of newborn leaves rustled in a sunny breeze, a welcome relief from the bitter fog that had engulfed the church and my vocational surety.

For the previous two months an unprecedented number of bishops and priests, starting with Cardinal Law of Boston, had fallen from grace for participation in the sexual abuse of children and the ensuing cover-up. Their duplicity was palpable in my knotted back and abdomen. In a few months I’d be ordained a priest. I didn’t want to do so on a lie.

My spiritual director loosened his clerical collar and lit a cigarette. “Where’s this coming from?” he asked. A couple of chattering wrens whooshed past.

I backtracked through six years of seminary formation. At events I had hobnobbed with supposedly holy men, some of whom had been harboring pedophiles. A few had done the deed themselves. By shaking their hands, mine were dirty. I knew the ecclesiology, how the bishops’ authority stemmed from a direct line to Jesus, but they were still criminals. Who were they to declare homosexuals “intrinsically depraved”?

When I’d applied for seminary, the director of seminarians — the priest who’d recruited me — explained that orientation didn’t matter, only celibacy. But on my intake interviews he’d told me to answer “yes” when the archdiocesan psychologist asked if I was attracted to women, and “no” when he asked if I was attracted to men. It was for the greater good, he said. Frightened of being cast out and ashamed of my true nature, I had lied as instructed.

In light of the sexual abuse scandal, lying about my orientation was no longer acceptable. I thought of what a gay friend who’d left seminary had said. His words became my own: “I don’t know if I can separate my private and public selves. Isn’t integration the goal of spiritual direction?”

“Of course it is,” my spiritual director said, more gravelly than usual. He stopped and turned to me. A tree cast a web of shadows over his face. His strawberry nose grew flushed, as he gestured with his hands. “Here’s the thing, Rastrelli. You have to ask yourself: Am I going to be a gay priest, or a priest” — he rolled his fingers and cigarette through the air like a barrel — “who happens to be gay?”

“What’s the difference?” I turned my head to inhale, trying to avoid his secondhand smoke. “Either way I’m gay. It’s a part of me.”

“Both/and.” I’d hit him with what he’d taught me in class. “Both/and” was the paradoxical answer for every ultimate question in Catholic theology: Scripture or tradition? Faith or works? Is Jesus divine or human? Are we sinful or good? is faith a solo or communal experience?

“Touché,” he said. We walked. He sucked his cigarette. “You’re a smart guy, Rastrelli. Give it some thought.”

I kicked a pebble onto the grass. “I have. I don’t want to lie about my sexuality.”

“It’s not lying if those asking don’t have a right to the information.”

He hadn’t even flinched. I wanted to shake the nicotine from his bones, to scream, “It was that kind of thinking that landed the bishops in the papers!” Still, part of me wanted him to be right. Silence was simpler, easier, and maybe my need to come out was just pride at work. My promise of obedience demanded that I surrender my ego. My vocation was about God, not my orientation. But couldn’t we priests be honest with one another? I had to try.

“Gay Catholics don’t have positive role models,” I said. “I don’t know of a single gay priest that’s healthy. Do you?” I stopped. He kept walking. This was as close as I’d ever come to asking him if he was gay. I suspected he was. He’d lived with another priest for decades. They vacationed and picked out carpeting together. They spoke about their cat as if she were their child. Even if he and his housemate weren’t having sex, they were a couple. I stepped in stride with him. “How am I supposed to be an integrated gay priest when I have no one to look up to? How does celibacy actually work?” I stopped again. “I’m asking you.”

He turned to me. His face became whiter than a funeral pall. “I’m sorry, Rastrelli, but that’s not a conversation I’m comfortable having with a student.”

He resumed his pace. I followed silently.

The breeze picked up. The undulating trees sounded like the ocean breaking on the shore. I choked back the urge to ask, “Are you gay?” I felt like a sinking ship in a fleet that had wandered into a minefield. After laying the mines himself, the fleet commander had ordered radio silence.

I didn’t want to drown alone. I didn’t want to hear him lie. I wanted the truth, but the truth was dangerous. Were I to come out amid sexual-abuse headlines, homophobic Catholics wrongly blaming gay priests for the scandal would demand my dismissal.

My spiritual director was right. Who were they to judge, to put my orientation before my vocation? They had no right to that knowledge. It was safer to be a priest who happened to be gay. Perhaps it was God’s will. The fear accompanying us back to the seminary told me so.

That day, I learned the unspoken rule passed down through generations of priests: the doctrine of justification for lying by clergy. I went on to be ordained a priest. I preached that “the truth will set you free” while living in silence and shame. After a long journey and much pain, I came out. I left the priesthood, finally refusing to live the lies that I’d been taught to venerate.