These old men will never get that their pathological need for secrecy is one of the main reasons their church is in crisis. When all else fails, redouble the effort to keep the lid on.

The College of Cardinals that will elect the next pope cut off formal communications with the news media on Wednesday after their private deliberations emerged in the Italian press, raising the specter of a leaking scandal that cast a pall over the last year in office of Pope Benedict XVI. 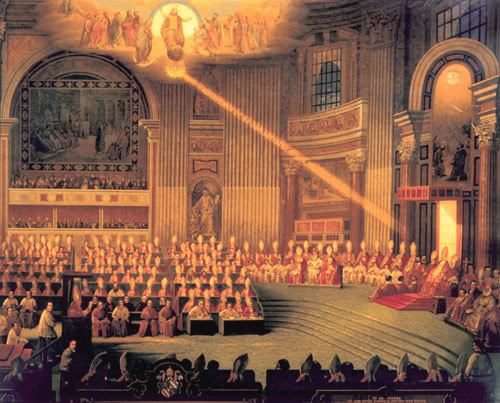 “Concern was expressed in the General Congregation about leaks of confidential proceedings reported in Italian newspapers,” said Sister Mary Ann Walsh, director of media relations for the U.S. Conference of Catholic Bishops, who has organized news conferences with American cardinals in recent days. “As a precaution, the cardinals have agreed not to do interviews.”

The decision, communicated only an hour before a scheduled news conference with American cardinals on Wednesday afternoon, marked a quick end to a brief period of openness on the part of the Americans, who had said they hoped to keep reporters as informed as possible without breaking vows of secrecy.

The Vatican declined to specify who in the college expressed opposition to the news briefings, saying only that as the cardinals prepare for the conclave that will elect the next pontiff, “they realize the importance of keeping things among themselves,” said the Rev. Tom Rosica, a Vatican spokesman.

A report Wednesday by Italy’s most authoritative Vatican reporter, La Stampa’s Andrea Tornielli, disclosed details of the cardinals’ private deliberations, including the revelation that they had called for reforms of the Roman Curia, the bureaucracy that governs the Catholic Church, and had asked for more information about the leaking of papal correspondence, a scandal known as VatiLeaks that engulfed the Vatican last year. Tornielli also reported that embattled Cardinal Roger Mahony of Los Angeles had spoken, that cardinals called for better communications between the pope and the heads of the various church departments, and that some cardinals wanted to extend the preliminary talks into next week.

According to Vatican officials and experts, the media blackout might be more than a crackdown in reaction to the leak. It could also have a political dimension. One Vatican official speaking on background said that Italian cardinals, some of whom stand to benefit most from a quick conclave, had expressed misgivings about the American news conferences, during which U.S. prelates articulated what they were looking for in a pope. They often described criteria that did not match the characteristics of cardinals in the curia. The American cardinals also repeatedly said they wanted more time to listen to their colleagues and get to know one another, a position that Vatican experts said diminished the chances and power of better-known Roman officials, many of them Italian, who would gain from a speedier process.

In conclaves, as in comedy, timing is everything. And it has itself been a point of contention.

Contrary to the statements of some of the American cardinals in the news conferences, the Vatican has said that the selection of the conclave’s start date could occur without all the voting members of the college in attendance. In light of his retirement, Benedict had amended the Apostolic Constitution to empower the College of Cardinals to select the start date, as long as everyone was present.

In the last few days, the Vatican briefing theater has amounted to a semantics seminar on the meaning of “attend.” The Rev. Federico Lombardi, the Vatican’s chief spokesman, has argued that if an absent but expected voting cardinal were going to attend, it was tantamount to his already being in attendance, and so the college could consider itself in plenary session.

American cardinals disagreed that they could tackle the start of the conclave without every seat filled.

“If the electors aren’t all there, why bother?” Cardinal Daniel DiNardo of Texas said in one of the news conferences at the North American Pontifical College on a hill overlooking the Vatican. “It takes as long as it takes.”

Of the 115 cardinal electors, only two remained absent Wednesday: Jean-Baptiste Pham of Vietnam and Kazimierz Nycz of Poland. The Vatican said they were expected Thursday.

“The date of the conclave was not decided,” Lombardi said Wednesday. “Rather than try to interpret the so-called delay,” added Rosica, “we should view this in terms of a process of discernment and reflection. All the electors will be here, and they can enter a full discussion about this.”

Vatican experts instead interpreted the delay as they did the tension over talking to the media — as another political power struggle between officials in the Roman Curia and outsiders.

A subsequent statement by Walsh seemed to cast the American cardinals’ lot with the outsiders, a development that could help the papal candidates among them shed their superpower stigma. “The U.S. cardinals are committed to transparency and have been pleased to share a process-related overview of their work with members of the media and with the public,” she said, not mentioning who was not pleased.

“Who does it hurt?” he asked. “The unknown candidate who would make a great pope, the younger cardinals; they are going to be dependent on the curial officials.”

Cardinal Sean O’Malley, the archbishop of Boston, is one such person who could benefit from a longer process. Though a long shot, he has remained on many short lists to become the next pope. But in the news conferences, he rejected the idea that there was a political dimension to slower deliberations.

“I don’t think that so much is a factor as many cardinals are concerned that if there is not enough time spent in the general congregations, that once we get into the conclave, it could drag on,” he said at a news conference Tuesday. He said the goal was “to have enough discussions previous that when people go to the conclave, they already have sort of a very clear idea of who they are going to vote for at that point. If you cut short the discussion beforehand, the conclave could go on and on.”

The Vatican said Wednesday there was no connection between extended preliminary meetings and a short conclave. “We should resist the link,” Rosica said.

News that the Americans had canceled their news conferences, which had become a daily ritual here, streamed into the smartphones of reporters during the daily Vatican briefing. It was the first thing reporters asked Lombardi about when he opened the floor to questions, reflecting the inconvenient story lines that can emerge for the Vatican in what is essentially a newsless environment.

It is a vacuum that critics of the church have rushed to fill. Earlier Wednesday, the Survivors Network of those Abused by Priests (SNAP), an organization that supports victims of sex abuse by clerics, held a well-attended news conference in which it released a list of a “dirty dozen” cardinals it considers unacceptable leaders of the church based on their past handling of the child sex-abuse crisis. Among them were cardinals often mentioned as prime candidates for the pontificate, including cardinals Timothy Dolan of New York, O’Malley of Boston, Leonardo Sandri of Argentina, Peter Turkson of Ghana, Angelo Scola of Italy and Marc Ouellet of Canada.

The College of Cardinals, which will choose the next pope, expressed concern about leaks of deliberations.

“It really isn’t up to SNAP to decide who should or should not participate in the conclave,” said Rosica.

One Vatican insider close to the church hierarchy questioned the wisdom of a media blackout, suggesting that the church was only creating a headache for itself.

(The front page of Wednesday’s Il Giornale, an Italian daily, carried a paparazzi-style photo of Benedict, who said before retiring and assuming the title of “pope emeritus” that he would be “hidden from the world,” taking a stroll in a white cassock, coat and ball cap.)

Instead, the Vatican has sought to satiate the army of accredited journalists flowing into Rome with brief glimpses behind the conclave curtain. On Monday, the Vatican showed a video of cardinals sitting, standing and reading in the theater where the congregations are held. On Tuesday, the feature presentation was a silent film with a camera panning over the three urns that will contain ballots during the election.

The video, which had the disembodied hands of a home shopping network presentation and the glacial pace of a Michelangelo Antonioni film, was accompanied by a Vatican press release explaining the significance and artistry of the containers. (“These are treated with a light patina which underlines the various chromatics of the bronze, the irregularities on the surface and the contrast between opaqueness and brightness.”)

On Wednesday, two flat screen televisions above the Vatican spokesmen showed blue-gloved workers carrying boards to protect the floor into the frescoed Sistine Chapel, unscrewing screws and unpacking from wooden crates the ovens that will burn the ballots.

The Vatican said, officially, that 18 cardinals spoke on Wednesday on topics ranging from their expectations, hopes and desired characteristics for the next pope to the church’s new evangelization efforts and the relations between the church government and bishops around the world. Speakers were asked to keep their remarks to about five minutes. Lombardi made a point to mention that the cardinals had wished a member of the college happy birthday.