By Jessica Lussenhop
In 2011, a slender book came out called Hidden Voices: Reflections of a Gay, Catholic Priest. The author was “Anonymous.”
“This book is for all of those who are being or have been driven away,” reads the introduction. “And that’s not just the gay population; it’s all of those who have accepted a member of their family, all of those who have allied as friends. They too have been silenced and shamed, ostracized by a Church teaching and hierarchal positioning that will not allow us to support, love, nurture and foster positive gay relationships in our Church.” 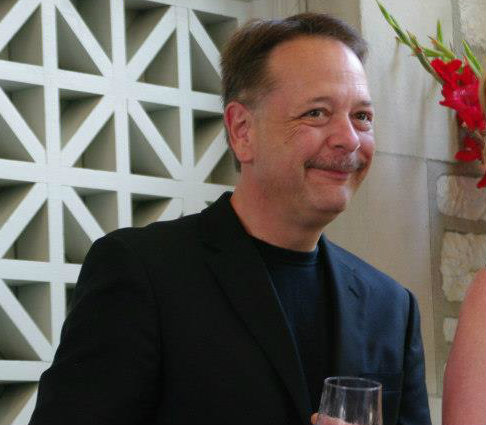 Earlier this week, Father Gary Meier, most recently of Saints Teresa & Bridget Parish in north St. Louis, revealed that he is the author. Although he says he was never truly “in the closet,” the announcement is a form of coming out.

“I know in my heart and my gut I need to stand in solidarity with those who’re being fired from their jobs, denied sacrament, excommunicated,” he tells Daily RFT.

Meier says that the church’s views on homosexuality were very different in the ’90s when he was in seminary. He says it was always known to his teachers, if not explicitly stated, that he is gay, and that so long as he was celibate, his orientation wasn’t seen as a problem. That changed when the pedophilia scandal broke in 2002.

“In 2005 they come with this hard stance of, ‘We’re not going to ordain gay priests,'” he says. “I was thinking I could try to find a way to reconcile my personal beliefs about being gay and what an incredible gift it is, not a cross, not an intrisic disorder…it was unsuccessful.”

He became frustrated enough to write Hidden Voices, then took a leave of absence in 2012 to earn his masters of counseling at University of Missouri-St. Louis. Finally, he resolved to stand behind his words in the book with his real name.

Here is what he posted to his personal website and to his Facebook page on Wednesday evening:

On May 23, 2013, I will be celebrating my 15 year anniversary to the priesthood. On the eve of this anniversary, I am releasing the 2nd edition of my book “Hidden Voices, Reflections of a Gay, Catholic Priest” which was originally published in 2011 anonymously. The second edition, now available, has one main difference – it is no longer anonymous. The decision to release the book under my name was not an easy one to make but one I felt was necessary.

It has been difficult to remain part of a hierarchy that has been so hostile towards homosexuals in recent years. This is especially true considering nearly 30% of all successful teenage suicides are attributed to sexual identity issues. Our church once stood for and represented the radical nature of God’s love for all people. That is not the true today – especially towards the LGBT community and therefore I feel compelled to stand in solidarity with those Catholic’s who have lost their jobs, have been denied the sacraments, have been excommunicated or who have been made to feel ‘less than’ by their church leaders because of who they love.

I am not sure where exactly any of this will lead. It is a huge leap of faith and to be perfectly honest with you, very frightening. I know that while many will celebrate and be grateful for this publication, others will be angry and upset and feel as if I am betraying the church. I have no such intention. I am just a man trying to live a life of integrity and speak the truth that God has given me to speak. I do not mean the church any harm and in fact I still love the church very much. I see my speaking out as an act of love toward a community which was born of God’s radical inclusivity. Somehow we have lost that in our church, I would like us to get that back.

It is my hope that you will take a moment to read my book with an open mind and heart and see this as an opportunity to love, support and welcome all people regardless of their sexual orientation. In the meantime please know that I will be praying for you and our church and ask for your prayers as well. In addition, please feel free to contact me if you have any questions or comments – I will look forward to hearing from you.

Meier says he also sent a copy of his book and a letter revealing himself as the author to the archbishop this week.

“Of course, the biggest obstacle is fear. The fear of the backlash, the loss of faculties, loss of income, loss of social status,” says Meier. “I don’t know what their response will be…whether the diocese takes away my faculties or not, I’m not going to use them.”

Here’s the statement from the Archdiocese of St. Louis in response to Father Meier’s news:

The Archdiocese of St. Louis just learned that Fr. Gary Meier authored the book “Hidden Voices, Reflections of a Gay, Catholic Priest” which was originally released anonymously in 2011. On May 22, 2013, Fr. Meier will release a 2nd edition of this book under his name.
Fr. Meier has been on leave for the past year for reasons of vocational discernment.

As a man who experiences same-sex attraction, Fr. Meier has before him an opportunity to be an example and mentor to Catholics in the archdiocese who struggle with the same feelings. Whether he will seize this opportunity to proclaim the Gospel of Life which offers the truth about the beauty and sanctity of human sexuality, is entirely within is his control.

The Church does not condemn individuals for having same-sex attraction. It teaches that all people are called to responsibility regarding sexuality — whether they are homosexual or heterosexual, priest or lay person.

Our Catholic faith teaches that we are defined by something far deeper than sexual orientation; rather we are defined by our identity as children of God. We agree with Pope Emeritus Benedict XVI when he said, ‘Every human being is loved by God the Father. No one need feel forgotten, for every name is written in the Lord’s loving heart.’ We encourage Catholics and all people of faith to pray for our culture.

As to whether or not Meier will ever be allowed to have a parish again, a spokeswoman for the Archdiocese says “there is no comment at this time with regard to Fr. Meier’s future.”

Even Meier himself doesn’t have much comment on his future — he’s not sure if he’ll attempt to continue being a priest or if he’ll enter a more secular existence. But he doesn’t regret his time so far as a man of the cloth.

“I have no doubt I was called into the priesthood,” he says. “Pretty amazing stuff has happened with God working through me.”

Meier is having a second book launch and discussion at UMSL on Tuesday.

2 Replies to “Catholic Priest Announces He Is Gay”