Married on July 11 in Maryland, John Arthur is in hospice care and “certain to die soon.” He and his husband have sued to ensure their marriage is recognized by Ohio officials at Arthur’s death.

A federal judge in Ohio ordered state officials Monday to recognize the marriage of two men that was performed in Maryland on the death certificate of an Ohio resident in hospice care who the judge says “is certain to die soon.” 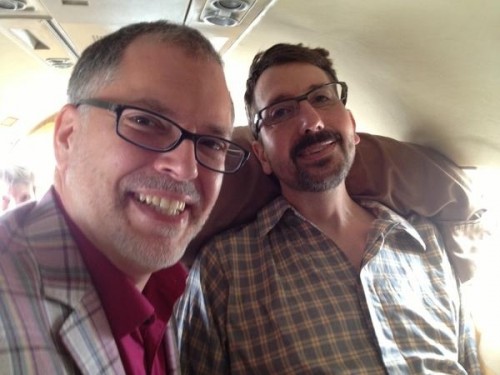 “The end result here and now is that the local Ohio Registrar of death certificates is hereby ORDERED not to accept for recording a death certificate for John Arthur that does not record Mr. Arthur’s status at death as ‘married’ and James Obergefell as his ‘surviving spouse,’” Judge Timothy Black wrote in granting the couple a temporary restraining order Monday. The order is in effect until 5 p.m. Aug. 5, unless the court extends the order at a later date.

The couple’s attorney, Al Gerhardstein, said in a statement, “This order is a major step on the march toward marriage equality in Ohio.”

Addressing the constitutional question, Black explained, “Although the law has long recognized that marriage and domestic relations are matters generally left to the states, the restrictions imposed on marriage by states, however, must nonetheless comply with the [U.S.] Constitution.”

To that end, the court examined the Supreme Court’s decision striking down part of the Defense of Marriage Act this June in United States v. Windsor, the 1996 decision in Romer v. Evans, and in other decisions addressing differential treatment found to be unconstitutional under the Constitution’s guarantee of equal protection of the laws.

Looking at Ohio’s bans on recognizing same-sex couples’ out-of-state marriages, while acknowledging its recognition of the marriages of opposite-sex couples who would not be allowed to marry in Ohio, Black concluded, “The purpose served by treating same-sex married couples differently than opposite-sex married couples is the same improper purpose that failed in Windsor and in Romer: ‘to impose inequality’ and to make gay citizens unequal under the law.”

According to the order, Obergefell and Arthur live in Cincinnati, Ohio, and “have been living together in a committed and intimate relationship for more than twenty years.” The order also notes “they were very recently legally married in the state of Maryland pursuant to the laws of Maryland recognizing same sex marriage.”

The order notes that Arthur is dying of amyotrophic lateral sclerosis (ALS), which prompted the couple to fly to Maryland on July 11 to get married.

As Black put it, the couple “traveled to Maryland in a special jet equipped with medical equipment and a medical staff necessary to serve Mr. Arthur’s needs, whereupon Plaintiffs were married in the jet as it sat on the tarmac in Anne Arundel County, Maryland. They returned to Cincinnati that same day.”

The lawsuit seeking to have the couple’s marriage recognized was filed against Gov. John Kasich and other state and local officials on July 19.

Ohio Attorney General Mike DeWine’s office defended the state’s laws in filings with the court on Monday, but Cincinnati city lawyers representing Dr. Camille Jones, the vital statistics registrar for the city, declined to defend the law, telling the court, “The City will not defend Ohio’s discriminatory ban on same-sex marriages,but the City’s vital statistics registrar is bound to follow Ohio law until that law is changed or overturned.”

Asked about the court’s issuance of the order on Monday evening, Kasich spokesman Rob Nichols told BuzzFeed, “We don’t comment on pending litigation other than to say the that the governor believes that marriage is between a man and a woman.”