As the man charged with cleaning out the stables at the scandal-struck Vatican bank, Monsignor Battista Ricca will need Machiavellian cunning, good fortune and a whiter-than-white record to have even a fighting chance. 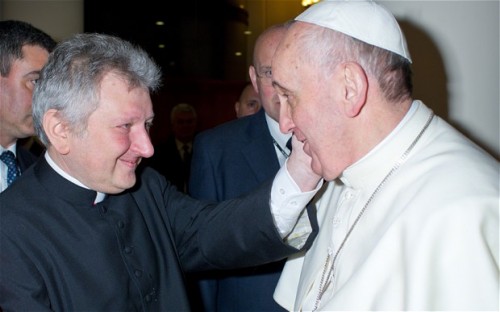 But Pope Francis’s new banker appears to possess none of these attributes after it was reported yesterday that he was found stuck in a lift with a rent boy. Msgr Ricca, as Francis’s new primate with responsibility for the troubled financial institution, known officially as the IoR (Institute for Religious Works), is supposed to usher in new transparency and badly needed reforms after years of financial scandal.

Earlier this month, a major report from finance police and magistrates warned that a lack of checks and controls by the IoR and the Italian financial institutions it had dealings with made the Vatican’s bank a money-laundering hot spot.

It is claimed that Msgr Ricca, 57, impressed Francis with the way he ran three key residences used by cardinals, bishops and priests visiting Rome. But detailed claims have emerged detailing how in 1999, Ricca took a Vatican diplomatic posting in Uruguay and moved his lover, Patrick Haari, a Swiss army captain, in with him, to the outrage of church figures and locals in the conservative South American nation. Captain Haari was forced out by the hardline Polish nuncio Janusz Bolonek in 2001.

But there were more problems for Ricca when he was attacked in a cruising ground that year, and soon after firemen had to rescue him from a broken lift, in which he was trapped with a youth known by local police. The weekly news magazine L’Espresso claims that Msgr Ricca was able to get the position as IoR prelate because the supposedly powerful “gay lobby” in the Vatican airbrushed his colourful CV.

Gay sex scandals at the Vatican have made the headlines before. In 2010 it emerged that one of Pope Benedict’s ceremonial ushers and a member of the Vatican choir were involved in a gay prostitution ring.

Vatican spokesman Padre Federico Lombardi sought to dismiss the claims about Msgr Ricca’s private life. “What has been claimed about Msgr Ricca is not credible,” he said. Msgr Ricca himself has not yet responded to the allegations. But La Repubblica noted that the Vatican had emphasised that his appointment as prelate for the IoR was technically an interim one, thus raising the possibility that the job might not last long.