The man who figured so prominently in my ordeal with the Oblates of Mary Immaculate is dead. Despite the fact that he and I never saw eye-to-eye; Rest In Peace Francis.

After a long bout with cancer, he is gone. It occurs to me, remembering that quote of his (and more on it, here), that we now have an intercessor for our times — an intercessor on the issue of Christian Persecution.

First report, out of the Chicago Tribune:

Cardinal Francis George, the first Chicago native to serve as the local archbishop and a man who during that 17-year tenure became the intellectual leader of the American church, has died after a years long struggle with cancer. He was 78.

Archbishop Blasé Cupich is expected to make an announcement at 2 p.m. at Holy Name Cathedral.

Monsignor Michael Boland, president of Catholic Charities for the archdiocese, released a statement saying, “Today we mourn the loss of an incredible leader, guiding spirit and loyal friend. Cardinal George had compassion for all. You saw this compassion in his eyes as he visited with the poor and most vulnerable in our communities.

Please read the whole story about the fascinating life of this extraordinarily accomplished priest and pastor. I always loved how expressively he shared his thoughts. One of my favorite stories about him was shared by Father Robert Barron, in his excellent book, Catholicism, and which I quoted here:

Fr. Robert Barron recalls a comment made by Chicago’s Cardinal Francis George, who had been asked what he was thinking as he stood on the balcony of St. Peter’s after the election of Benedict XVI. George said, “I was gazing over toward the Circus Maximus, toward the Palatine Hill where the Roman Emperors once resided and reigned and looked down upon the persecution of Christians, and I thought, ‘Where are their successors? . . . But if you want to see the successor of Peter, he is right next to me, smiling and waving at the crowds.’”

There is a wonderful meme I once saw on George that very succinctly spelled out how very impressive he was, in faith, and gifts and life-story. I will try to find it, so check back, because I will have more thoughts and links, shortly.

In the meantime, let us pray: Eternal rest grant unto him, O Lord, and let your perpetual light shine upon him!

George’s abiding passion was the relationship between faith and culture, and especially the urgency of a “New Evangelization,” meaning a new missionary zeal in Catholicism.

After his appointment as archbishop of Chicago in 1997, and especially during his three-year term as president of the US Conference of Catholic Bishops from 2007 to 2010, George was the Vatican’s go-to figure in the United States and one of just a handful of American prelates whose reputation and influence reached around the Catholic world.

Among other aspects of his résumé, George will be remembered as the architect of the US bishops’ battles with the Obama administration over contraception and health care reform, and the leader who made religious freedom a signature concern for the bishops.

His legacy also will be tied to the child sexual abuse scandals in the American Church, both his championing of a “zero tolerance” policy and allegations that he failed to apply that policy himself in a high-profile Chicago case.

“The death of an exemplary churchman such as Cardinal Francis George brings much sadness at a time of joy and resurrection. We find peace in knowing that, after so much suffering, he has been raised up with our Lord. As archbishop of Chicago and president of the U.S. bishops’ conference, Cardinal George led as a kindly servant and unmatched intellectual, a man who encouraged everyone to see how God makes us all brother and sister to one another. I join with my brother bishops in thanking God for the gift of his witness and invite all to pray for the faithful repose of his soul.”

Here is the meme I mentioned, 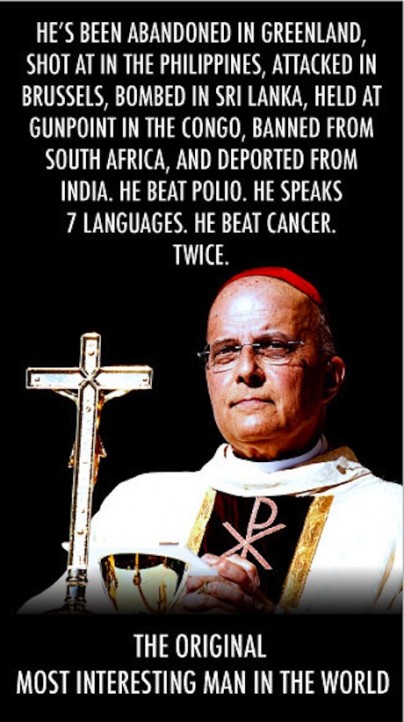