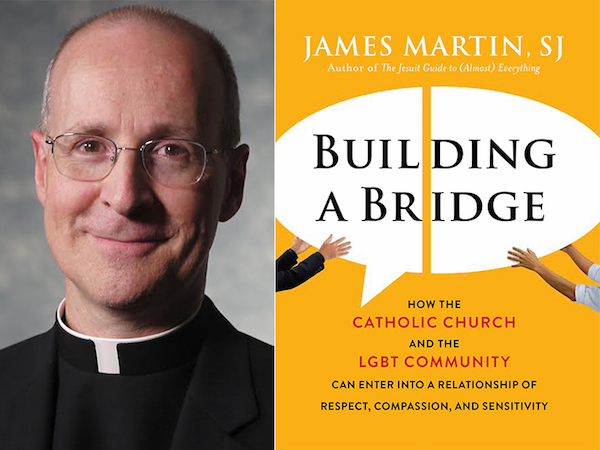 The Vatican’s point man on family issues and a U.S. cardinal who is close to Pope Francis have both written blurbs for a new book by a Jesuit priest and popular author that calls on the Catholic Church to be more respectful and compassionate toward gay people.

They called it “brave, prophetic, and inspiring” and a “much-needed book.”

Such positive language from such senior church leaders is extraordinary and another sign of how Francis is reorienting the church toward a more pastoral focus.

Building Bridges: How the Catholic Church and the LGBT Community Can Enter into a Relationship of Respect, Compassion, and Sensitivity, by Rev. James Martin of America magazine, does not advocate for any changes in doctrine nor does it touch third-rail topics like same-sex marriage; nor do the churchmen who praise the book, to be published by HarperOne on June 13.

But simply using terms like LGBT to describe people is highly controversial for many in the church who insist that gay people be described as “homosexual” or “same-sex attracted” rather than by words that seem to affirm their orientation.

Cardinal Kevin Farrell, who was recently chosen by Francis to head the Vatican office on laity, family, and life issues, praises Martin’s writing in his blurb: “A welcome and much-needed book that will help bishops, priests, pastoral associates, and all church leaders more compassionately minister to the LGBT community.

“It will also help LGBT Catholics feel more at home in what is, after all, their church,” said Farrell, the former bishop of Dallas.

“In too many parts of our church LGBT people have been made to feel unwelcome, excluded, and even shamed,” Newark Cardinal Joseph Tobin, who Francis personally picked for the New Jersey archdiocese, adds in a blurb.

“Father Martin’s brave, prophetic, and inspiring new book marks an essential step in inviting church leaders to minister with more compassion, and in reminding LGBT Catholics that they are as much a part of our church as any other Catholic.”

“The Gospel demands that LGBT Catholics must be genuinely loved and treasured in the life of the church. They are not,” writes Bishop Robert McElory of San Diego, also a rising star in the U.S. hierarchy, in another endorsement.

McElroy says Martin “provides us with the language, perspective, and sense of urgency to replace a culture of alienation with a culture of merciful inclusion.”

Francis himself sparked controversy when he used the term “gay” last year in saying that the Catholic Church should apologize to LGBT people, among others, that it has “offended.”

The pope’s comments came in the wake of the shooting massacre at a gay nightclub in Orlando, Fla., in June that left 49 dead, and Martin’s book also emerged from that tragedy.

Martin, whose books about Jesus and Catholic spirituality and related topics have landed on the best-seller lists, has often written about the role of gays and lesbians in the church, and about the need for the church to do more to welcome them.

But he was struck by the relative lack of compassion from U.S. bishops for gays and lesbians who were targeted in the Orlando shooting and elsewhere, and he voiced his concerns in a powerful Facebook video that went viral.

The video prompted more than the usual level of anger and criticism of Martin, and prompted him to begin writing about how to address the rift between LGBT people and church leaders.

He outlined his views in an October talk — an address that would become the basis of “Building Bridges” — as he accepted an award from New Ways Ministry, a group for LGBT Catholics and causes that in the past has been condemned by church leaders who said it was not authorized to represent itself as a Catholic organization. (The talk was reprinted in America magazine.)

A co-founder of New Ways Ministry is Sister Jeannine Gramick, whose views were considered so far outside the bounds of Catholic teaching that she was barred by the Vatican and her order from speaking about homosexuality. She transferred to another order and has continued to minister and speak and write on the topic.

In fact, Gramick also blurbs Martin’s book, writing: “Father Martin shows how the Rosary and the rainbow flag can peacefully meet each other. A must-read.” That she is endorsing the same book as senior church leaders is an indication of the sea change under Francis.

“I was delighted that Cardinal Farrell and Cardinal Tobin found the book helpful,” Martin said in an email to RNS. “To me, it’s a reminder that many in the hierarchy today support a more compassionate approach to LGBT Catholics.”

In his talk, as in the book, Martin called on church leaders and all Catholics to treat gays and lesbians with greater respect and sensitivity.

He said church leaders should address LGBT people by the term they call themselves, and he called for an end to the indiscriminate firings of church employees who are discovered to be gay or who make their sexual orientation public. Such firings selectively target LGBT people, he said.

But he also called on gays and lesbians to be more considerate and respectful of the hierarchy, saying both sides must listen to each other and learn from each other.

“This may be very hard for people who feel beaten down by the church to hear,” Martin writes in the book.

“One gay friend recently told me that this mockery comes not from a place of hatred, but from a sense of betrayal. But being respectful of people with whom you disagree is at the heart of the Christian way. And part of this is surely about forgiveness, an essential Christian virtue.”