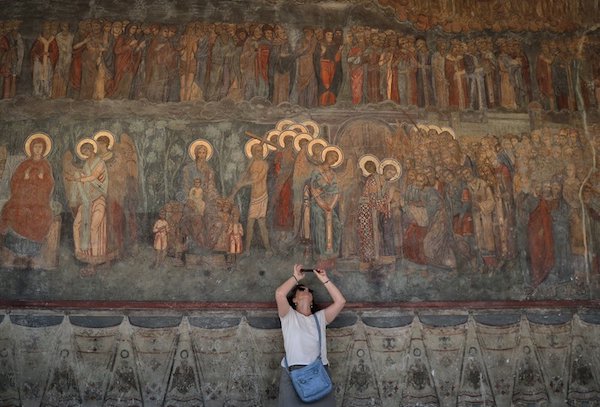 A Romanian bishop who was seen on video engaging in sexual acts with a male student resigned Friday, the Romanian Orthodox Church said.

The patriarchy said the Bishop of Husi, Corneliu Barladeanu, 51, had decided to step down “for the peace and good of the church.” He maintains his innocence and has not made any public comment.

The statement was issued at the end of a two-day Holy Synod where a sex scandal was discussed for the first time in its 92-year history.

There has been public furor in Romania over Barladeanu and another scandal involving a priest who had sex with a male student as believers are demanding more accountability from the church.

Outrage was heightened as the two cases involved homosexual acts. The church, however, insisted the bishop would have been similarly chastised if the alleged sexual misdemeanors involved a woman.

Barladeanu will no longer hold an official position, but he will remain a monk. Orthodox bishops are monks.

The statement said the resignation was the best outcome, because an investigation would last months and would “prolong the situation of uncertainty of the bishopry of Husi” in northeast Romania.

But church critic and political analyst Stelian Tanase said the church to which more than 85 percent of Romanians belong should have issued a stronger statement. “I think that the Synod should have come out with a strong decision to condemn such shameful practices for servants of the church…. Instead they preferred a cover up. ”

The church also blamed “an aggressive campaign of some media outlets aimed against the Romanian Orthodox Church, often with the complicity of some errant priests.”

It added that “all believers … should respect the discipline of the church and permanently renew their spiritual lives.”