An Irish-born priest spoke out against celibacy in the priesthood in the final days of his life.

A priest born in County Kerry has used his final words to question the compulsory celibacy undertaken by priests in the Catholic Church. Fr Daniel O’Leary died in England on January 21, 2019, but used his final column with international Catholic weekly The Tablet to voice his dissent to the requirement.

O’Leary, a well-known spiritual writer, was diagnosed with cancer last June, and wrote the piece, which was published posthumously, so as to be “free of fear and bitterness, and full of love and desire, as I step up for the final inspection.”

“I now believe, with all my heart, that compulsory celibacy is a kind of sin, an assault against God’s will and nature,” O’Leary stated.

“I’m just pointing out that one of the fall-outs of mandatory celibate life is the violence it does to a priest’s humanity, and the wounds that it leaves on his ministry. 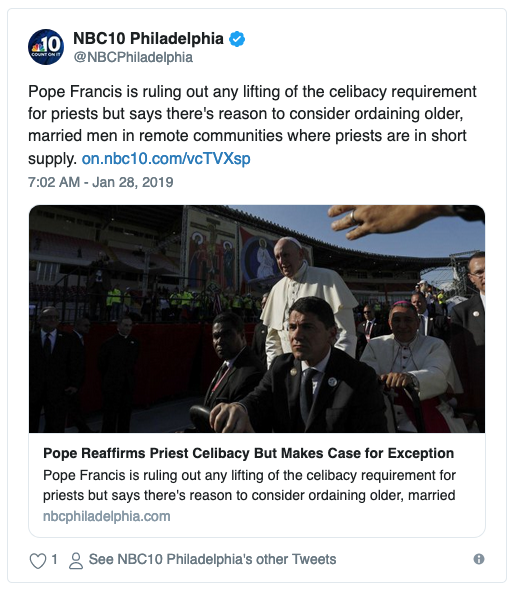 “Please remember, I’m only recalling the memories, convictions and awakenings that are filling my soul during these ever-so-strange final days and nights,” he added, acknowledging that some within the church would regard his words as traitorous.

Describing clericalism as “a collective malaise,” O’Leary continued to write: “The enemy, we were warned, back in the 1950s, was a failure in prayer; falling in love was the cancer; suppression, sublimation and confession were the cure. Emotion was the threat; detachment was the safeguard; becoming too human was the risk; the subtle carapace of clericalism was the precaution.

“[It] keeps vibrant, abundant life at bay; it quarantines us for life from the personal and communal expression of healing relationships, and the lovely grace of the tenderness which Pope Francis is trying to restore to the hearts of all God’s people.”

Father Daniel O’Leary was born in Rathmore, Co Kerry in 1937. He trained to be a priest in All Hallows College, Dublin, before moving to England.

An award-winning author of 12 books, he was a regular contributor to The Tablet, The Furrow and other publications, and held Masters degrees in theology, spirituality and religious education.