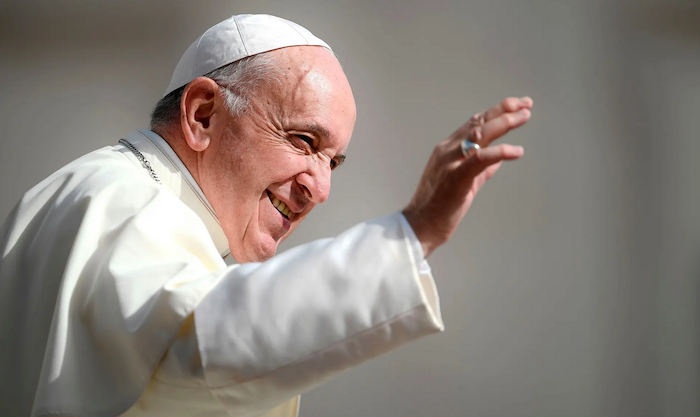 Pope Francis has told the parents of LGBT+ children to love them as they are “because they are children of God” in a groundbreaking meeting.

The pope met with 40 parents of LGBT+ children on Wednesday (17 September) to hear their concerns about the church’s disregard for their families.

The parents, all associated with the LGBT+ Catholic parents’ organisation Tenda di Gionata, told Pope Francis about the cold climate their queer children faced in the church when they came out, Avventire.it reports.

At the end of the meeting, the group’s vice president Mara Grassi gave Pope Francis a copy of a Fortunate Families by Mary Ellen Lopata, which details the experiences of Catholic parents of queer children.

He was also given a rainbow-coloured t-shirt emblazoned with the words: “In love there is no fear”.

“He looked and smiled,” Grassi said of the presentation. She called the meeting “a moment of deep harmony that we will not forget”.

Closing out the meeting, Pope Francis told the gathered parents: “Love your children as they are, because they are children of God.”

Speaking after the event, Grassi said their organisation wants to create a dialogue between LGBT+ people and the Catholic church.

“Taking a cue from the title of the book we presented to him, I explained that we consider ourselves lucky because we have been forced to change the way we have always looked at our children,” she said.

“What we now have is a new gaze that has allowed us to see the beauty and love of God in them.

“We want to create a bridge with the church so that the church too can change its gaze towards our children, no longer excluding them but welcoming them fully.”

The group also gave Pope Francis letters written by parents of LGBT+ children, detailing their painful journeys to acceptance in the face of anti-LGBT+ sentiment in their church.

In one letter, a woman identified as Anna B told Pope Francis that her son knew he would only be loved by his parents if he “suffocated” his true identity.

She explained that she became involved with an LGBT+ Christian group in an effort to better understand her son’s identity after he came out as gay.

The meeting is being hailed as a significant moment of change for LGBT+ members of the Catholic church. The institution has been unwavering in its opposition to LGBT+ acceptance throughout its long history.

However, there was some hope for change among LGBT+ Catholics when Francis was appointed as the successor to Pope Benedict XVI in 2013.

Since then, Pope Francis has had a chequered history with the LGBT+ community.

In 2013, he made global headlines when he called on the Catholic church to “show mercy, not condemnation” to gay people – representing a stark shift in tone from his predecessors.

But in 2019, he told a Spanish newspaper that parents who see signs of homosexuality in their children should “consult a professional” – a comment that was considered by many to endorse conversion therapy.

Meanwhile, he has been staunch in his opposition to trans identities, comparing them to nuclear war and genetic manipulation in 2015.

In 2019, the Vatican released a document claiming that “gender ideology” is a “move away from nature”.