by Sari Aviv and Anna Matranga

The setting, with its soaring cathedral ceiling and sacraments, is typical of any Catholic service, but the similarities stopped with this sermon: “Because if there’s anything that an LGBTQ person will know, it is that we’re going to face opposition,” said Father Greg Greiten.

Yes, Father Greiten said “we” members of the LGBTQ community. He is one of very few openly gay priests.

When asked how many there are, he said, “I’ve always heard the number thrown out, like, ten of us, that are really out there.”

There are roughly 38,000 priests in America.

Correspondent Seth Doane Asked, “What are you risking by being out?”

“Sometimes it feels like I have to walk on a tightrope,” he replied.

Father Greiten “came out” to his congregation in this Milwaukee suburb about three years ago, at age 51, when he announced, “I am a gay priest, and a celibate priest.” This moment came after a lifetime of struggle, serving a church that teaches that “acting on” homosexual feelings is a sin.

“I just want to break the silence,” he told Doane. “We’re here. And for me, Seth, that was part of the hypocrisy that I was watching happen.”

“Did you feel like a hypocrite when you were up here at the pulpit, and not out?”

“I personally did. It’s like wearing a mask. Every day I have to go up there and pretend I’m something I’m not.”

He pledged, as all priests do, to live a celibate life. For him, this was not about sexual activity, but identity. He found folks in his congregation were overwhelmingly supportive.

Doane asked Carol Webber, “Does it matter to you that the priest here is gay?”

“No, it’s a positive thing,” she replied.

Carol and Fred Webber’s son had come out to them years earlier. “We went into the closet for a while, until we were able to accept it,” she said. “Of course, we loved our son.” Later, they say having an openly-gay priest helped.

But the church itself has not been so pleased.

Father Greiten said, “The unwritten comment is, ‘Don’t talk about it. We know you’re there, but be silent.'”

“Father Frederick,” as we’ll call him, feared losing his salary, healthcare, church housing, pension, and the authority to minister. During his interview, “Sunday Morning” hid his identity. “I’m not courageous enough yet,” he said.

Doane asked, “What does it say that you need to do this interview in shadow?”

“It says that it’s not cool to be gay if you’re a priest. And if you are gay and a priest both at the same time, you’ve gotta hide one or the other.”

He likened that secrecy to the “double-life” of spies.

When asked if he has remained celibate as a priest,” Father Frederick replied, “No, I did not. I experimented. I struggled. There were liaisons, there were relationships. And there was love several times.”

Love and sexual intimacy with another man? “Yes.”

With other priests? “Once or twice.”

He said his seminary where he trained to be a priest was a “warehouse” of young men struggling with their sexuality. They were encouraged from the top, and the beginning, to keep quiet.

Doane asked, “What’s the effect of this culture of silence on the church?”

“It is a slow-moving cancer,” Father Frederick said.

While Pope Francis famously responded “Who am I to judge” when asked about gay priests during a papal press conference, he has also said that anyone with “deep seated” homosexual tendencies shouldn’t be a priest. “Their place is not in ministry or in consecrated life,” he said.

Father James Martin, a Jesuit priest and author, and the most high-profile advocate for LGBTQ Catholics, said, “I think that if you had suddenly all the gay priests in the United States come out, I think the Church would be forced to look at the question of homosexuality in a very different light.”

In 2019 Pope Francis requested a meeting with Father Martin: “The Vatican put our audience on the Pope’s official schedule. They sent out a picture. I met with him in the Apostolic Palace, which is where he meets with presidents and diplomats. It was a pretty strong sign of his support.”

“The tone is new; the teachings haven’t changed?” asked Doane.

“The teachings haven’t changed, but the tone is very important.”

And, Father Martin says, ultimately Catholic leaders need to shift their thinking: “It’s a life issue. We have high suicide rates among LGBT youth, and we also have places in the world where gay people can be arrested and executed for being gay.”

He calls Pope Francis (the first pope to use the word “gay” publicly) the most pro-LGBTQ pope ever, though acknowledging that’s “not a high bar.”

“One of the things I lament is, if there were a case of, say, bullying in a parish or in a school, it would be wonderful for the gay priest to get up and say, ‘Look, I was bullied as a boy,'” Father Martin said. “So, there are these life experiences that I think people are missing in the church.”

Doane asked. “How many gay priests do you think there are?”

“It is a large, silent community, a vast silent majority,” said Frédéric Martel, a French author who spent four years researching his book, “In the Closet of the Vatican,” about the gay underworld there. 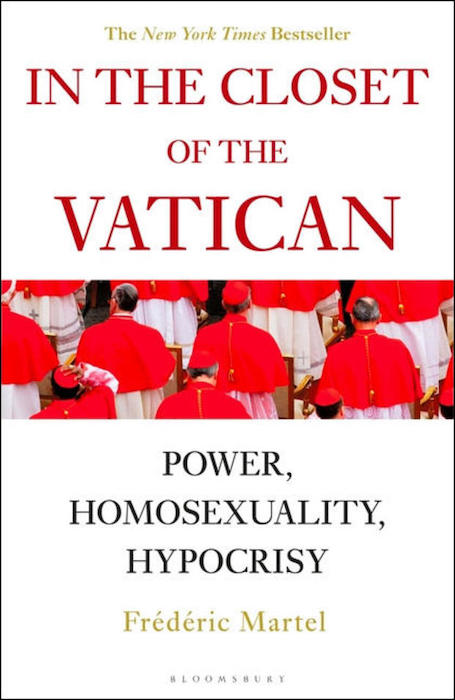 He said he interviewed hundreds of priests, even cardinals: “It’s ‘Fifty Shades of Gay.’ I mean, a lot of different kind of gay.”

He suggests the largest group of men in the Vatican may be gay, but do not practice, and can actually be the most homophobic – and in interviews discovered a real range of sexual identities. “Each of them, each of them is totally singular in his little closet,” Martel said.

Francesco Mangiacapra is a sex worker with a law degree who found one priest client led to another, and another. When Doane asked how many priests he had slept with, Mangiacapra replied, “I think about 100. We have in Italy many, many thousands of priests, so 100 is not so much.”

Over roughly five years, Mangiacapra compiled a 1,200-page “dossier” of personal profiles, graphic photos and text-message exchanges with roughly 50 of the priests who were his clients. He submitted it to his local archdiocese of Naples – he says – as a political act.

“This demonstrates that there’s a flaw in the system – a system which tolerates certain behavior but makes it so these behaviors are hidden,” he said.

Mangiacapra admitted the dossier had scared off some priest-clients, but not all, adding: “The libido is higher than the fear.”

It’s important to note: the priests “Sunday Morning” spoke with, as well as the Vatican itself, see no connection between homosexuality and the clerical sexual abuse crisis. A five-year study by New York’s John Jay College, commissioned by bishops, found “the data do not support a finding that homosexual identity is a risk factor for the sexual abuse of minors.”

Doane spoke with about two dozen priests, who told us they were gay, but few would share their stories publicly.

Father Frederick said, “I admire priests who are willing to stand up, come out of the closet. That’s courage.”

Most told Doane they felt forced into the closet. It’s a painful, confining place, particularly in a church community where they’re expected to be role models.

Father Greg Greiten, faithfully serving his parish in Wisconsin, said secrecy is a scourge in the church, so the first step for him is being open and honest.

Doane asked, “You signed up to work for an institution that thinks being gay, acting out on that, is a sin.”