Colorado’s Catholic churches are handing parishioners a pledge card in which those that sign vow to oppose the pending civil unions bill. 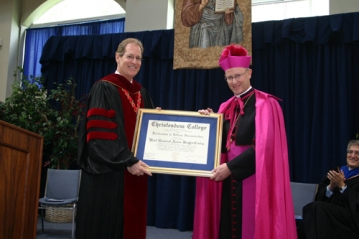 Bishop Conley [left] urged people to participate in the campaign because “it allows each of us to speak the truth – to ask the government to respect the plan for marriage God has given us.” “Doing so protects children, protects marriage and, ultimately, protects the common good of all of us.” He warned that recognizing civil unions for same-sex couples would allow them to adopt children and infringe on religious liberties for many groups. Some also view civil unions as “a stepping stone” to endorsing polygamous relationships. “Redefining marriage means that government will try to redefine truth,” he said. He then cited Bishop Salvatore J. Cordileone of Oakland, who chairs the U.S. bishops’ conference subcommittee on marriage. Bishop Cordileone recently said that civil unions can “in no way” be considered a permissible compromise or an advance for the common good.

Bishop Cordileone, you should know, is considered the creator of Proposition 8.