The group Catholics United, which until now has avoided directly contradicting Catholic teaching in its defense of Democratic political causes, has now denounced Catholic efforts to defend traditional marriage as a “far right-wing” social issue. 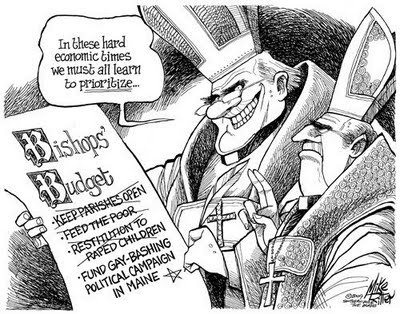 The shift comes in an Oct. 18 statement criticizing Catholic donations to organizations that support marriage and oppose its redefinition to include same-sex couples. Catholics United called for a halt financial support for “anti-marriage equality ballot initiatives” in Maine, Maryland, Minnesota and Washington, states where the issue is on the November ballot.

Catholics United Executive Director James Salt said advocacy against “civil same-sex marriage laws” has the effect of “pushing younger generations of Catholics out of the Church.”

Catholics United’s Oct. 18 statement cites a report by Equally Blessed, a coalition of four dissenting Catholic groups: Call to Action, Dignity USA, Fortunate Families and New Ways Ministry. The report criticizes the $6.25 million that the fraternal order the Knights of Columbus has made since 2005 to defend marriage as a union of a man and a woman.

The founders of New Ways Ministry, Sister Jeannine Gramick and Father Robert Nugent, have run into the highest profile trouble of any of the members in the coalition.

In 1999, the Vatican’s Congregation for the Doctrine of the Faith said that because of “errors and ambiguities” in their approach, Sr. Gramick and Fr. Nugent were permanently prohibited from any pastoral work involving homosexual individuals.

Cardinal Francis George of Chicago said in a Feb. 2010 statement that New Ways Ministry’s “lack of adherence” to Church teaching on the morality of homosexual acts was the “central issue” in the censure of its founders and continues to be its “crucial defect.”

While Catholics United criticized only the Knights of Columbus for “anti-marriage equality spending,” the Equally Blessed report also blamed the Vatican for opposing homosexual political causes.

The Equally Blessed report also criticized Knights’ support for the pro-life movement. It said the fraternal organization contributes to what it calls “far-right anti-abortion groups”: Americans United for Life, the Susan B. Anthony List and the pregnancy center network Birthright USA.

The political fight over the definition of marriage has resulted in harassment and intimidation of traditional marriage supporters. Some supporters of traditional marriage, including Catholics, have lost their jobs because of activist pressure. Businesses and non-profits which do not want to recognize same-sex relationships have been the target of lawsuits and legal action.

In some states that recognize same-sex unions, Catholic adoption agencies have been forced to close because they could not in good conscience place children with same-sex couples.

Tax forms show that the Tides Foundation, whose 2009 newsletter describes itself as “a leading funder of LGBT work,” has given at least $35,000 to the group since 2007. The American Federation of State, County and Municipal Employees, whose president praised President Obama’s endorsement of redefining marriage in May, has given at least $32,500. The AFL-CIO has given $5,000 to the group, whose contributions and grants in 2011 totaled about $470,000.

Catholics United also has connections to the White House.

Visitor records from the White House show that the Catholics United leadership has visited it several times, sometimes as part of a large group of faith-based representatives and sometimes for small meetings.

The records show Salt and Catholics United founder Christopher Korzen in September 2010 had a small meeting with Patrick Gaspard. At the time, Gaspard was the Obama administration’s Director of the Office of Political Affairs. He is now the Executive Director of the Democratic National Committee.

Alexia Kelley, former head of Catholics United ally Catholics in Alliance for the Common Good, also attended the meeting. She is presently director for the Department of Health and Human Services’ Center for Faith-Based and Neighborhood Partnerships.

The leadership of Catholics in Alliance for the Common Good itself has several connections with the Obama campaign. Board member Stephen Schneck, director of Catholic University of America’s Institute for Policy Research and Catholic Studies, is also a member of the group Catholics for Obama.