At Baltimore’s St. Vincent de Paul Church, Rev. Richard T. Lawrence read the archbishop’s statement urging a vote against the marriage bill referendum. He then told his parishioners why the archbishop was wrong. 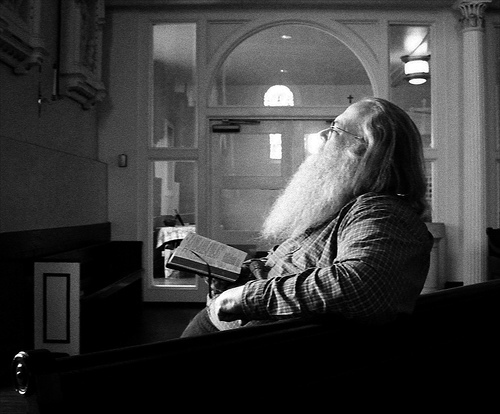 A Maryland priest bucked the Vatican — and his own archbishop — Sunday by telling his parishioners that he sees a future in which the Roman Catholic Church could recognize “the total, exclusive and permanent union of gay and lesbian couples as part of the sacrament of matrimony.”

The Rev. Richard T. Lawrence drew a quick response from the local Catholic hierarchy. Baltimore Archbishop William E. Lori asked that a copy of Rev. Richard T. Lawrence’s homily that had been posted online at the church’s website be removed because it ran counter to Catholic Church teaching on the subject. Lawrence complied, Lawrence’s pastoral associate, Chris McCullough, told BuzzFeed on Thursday.

Lawrence acknowledged in his sermon that the sea change he predicted won’t happen in the near future, but in the meantime he told parishoners at Baltimore’s St. Vincent de Paul Church on Sunday that “even if we do not believe that gay marriage ever could or should be allowed in the church, we could live with a provision that allows civil marriage of gay and lesbian couples.”

Lawrence’s striking opposition to the Catholic Church’s strong teaching against the recognition of same-sex couples’ marriages, reported first in the National Catholic Reporter, was, in and of itself, unexpected in light of the dogmatic path set by Pope Benedict XVI.

What made Lawrence’s presentation of his view more remarkable was that it was preceded by his reading the letter written by Lori, who as archbishop oversees Lawrence, urging the congregation of the importance of opposing the referendum in Maryland on Nov. 6 over the marriage equality bill passed and signed into law earlier this year. Lori told all parishioners in the letter, read by Lawrence, that they faced “the momentous choice of whether to maintain marriage as the union of one man and one woman in Maryland, or to irrevocably dismantle our state’s legal recognition of the most basic unit of our society — the family unit of mother, father and child.”

Lawrence, after finishing the archbishop’s letter, then told the congregation of his views and asked them, “[C]ould not civil law be allowed to progress where church law cannot go, at least not yet? Personally, I believe that it can and that it should.”

He concluded: “So there you have it: the official teaching of the church and my personal reflections.”
According to the Catholic Reporter’s Arthur Jones, the parishioners gave Lawrence a standing ovation.

Lawrence’s move fits with his biography on the church’s website, which notes that he has been “active in social justice ministries all his life, starting with the Civil Rights movement in the [1960s] and the Peace movement in the [1970s], and is today one of the leaders in the Inclusive Housing movement.”

Moreover, on Thursday, Chris McCullough, the pastoral associate at St. Vincent de Paul Church told BuzzFeed that, although the homily had been taken down from the church’s website, the Catholic Reporter article provided “a very solid, essential synopsis of the homily.”

Of the archbishop’s response, McCullough said, “We knew there would be repercussions.” He added, “I think it’s gracious that there wasn’t further punitive action taken.”

McCullough said, despite the pushback from the archbishop, Lawrence gave the homily because he wanted parishioners to know “there are other opinions” and “to keep [those opinions] in dialogue.”