When I was a boy, more than 50 years ago, ecclesiastical clothes were impressive. They were unusual and colorful, antique and sacral; they were distinctively Roman Catholic. The colored watered silk, the jeweled gloves, the red slippers (buskins) pointed to an individual caught up in a church office. This transcendent figure, a representative of the divine, appeared among the ordinary suits and dresses of working-class Catholics at rare moments. Nonetheless, even as a teenager singing in a college choir at the archbishop’s liturgies, I had already noticed that sometimes rituals focused more on the clothes than on religious words and sacrament. Removing gloves and putting on glasses, keeping a skullcap in place or adjusting a pallium could appear more important than the elevation of the chalice. 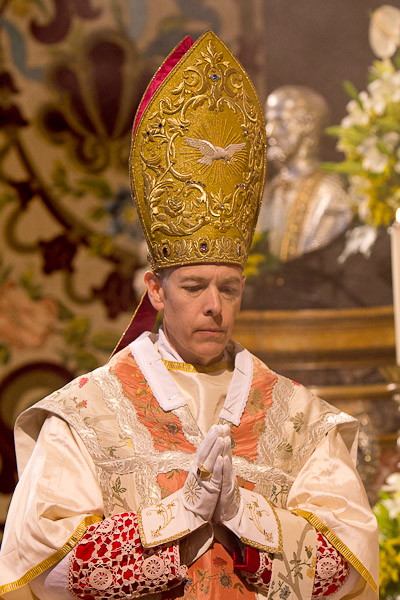 Time passes, and today ecclesiastical clothes are less intelligible and point less clearly to something beyond their colors and gilt. They raise questions of gender and class, of culture and sacramentality.

There are three kinds of clothes male Catholics wear for public ecclesiastical and liturgical events. There are vestments for the liturgy of the Eucharist and other sacraments and for devotions. Among them are chasuble and stole, alb and cincture, miter and cope. Second, there are the habits of religious orders and congregations. Third, there are special garments for those in the episcopal order and for those in levels below (monsignors) or above (cardinals). Vestments at the Eucharist and other liturgies appear at their best when they are simple, aesthetically pleasing and inspiring to the people viewing them. Members of religious orders, particularly monks and friars, tend to wear their habits at liturgy and at other times inside their religious houses.

Here is a ninth-century description of the liturgical clothes used by the bishop of Rome, clothes related in their style to garments worn by Romans two centuries earlier. Walahfrid Strabo, who died in 849, wrote: “Priestly vestments have become progressively what they are today: ornaments. In earlier times priests celebrated Mass dressed like everyone else.”

Often special church garments do not come from the patristic or medieval period (which did not encourage distinctive clothes). They come from the Baroque period from 1580 to 1720, when liturgy as theater arranged rituals to channel graces. After 1620, in the world of Pope Urban VIII, ecclesiastical garments began to assume the importance they have today in spotlighting ecclesiastical officeholders. Who may wear what, in which color, and at which church services? The years from 1830 to 1960 witnessed additional, quite artificial elaborations of church attire. Today vestments that reflect the simplicity of the patristic or early medieval style also appear contemporary, while those that appear antiquarian and flamboyant are the product of the Baroque.

Jesus is a critic of religion. He warns against human display and the use of religious objects to disdain others. He condemns using religion to further being noticed or set apart from most people. “The scribes and the Pharisees … do all their deeds to be seen by people; they make their phylacteries broad and their fringes long, and they love the place of honor at feasts and the best seats in the synagogues … The greatest among you must be your slave” (Matthew 23:5-6, 12).

Few dimensions of human life aroused Jesus’ anger, but religious leaders seeking attention and power through clothes were called “whitewashed tombs that look handsome on the outside but inside are full of the bones of the dead” (Matthew 23:27).

In the years just before the Second Vatican Council (1962-65), Dominican Fr. Yves Congar wrote a critique of the church’s display of power and privilege. He had researched the origins of church vestments and insignia in the Roman Empire and in feudalism, concluding that those clothes no longer have any clear meaning for people. He concluded that vestments can have value, although their religious presence must resonate with the people they address.

One contemporary critique of ecclesiastical clothes was Federico Fellini’s 1972 movie “Roma.” Ecclesiastical fashions are exhibited on a runway where models display chasubles and miters for an audience of nuns and clerics and a presiding cardinal, a pale, sexless creature with crimson robes and ill-suited sunglasses who falls asleep. The style show ends with new designs using electric lights on chasubles.

Among a few small groups in the church, religious clothes are returning. They may be returning not as religious signs but as distractions from faith and ministry. Sashes and birettas, chains and large crosses, amices and maniples, special gloves and shoes have reappeared. Restorationist and reactionary groups tend to have striking clothes just as dictatorships have uniforms.

These groups show a preference for special kinds of clerical collars, tall miters, elaborate trains, a metal cross hung around the neck. Programs on EWTN are the runway for Baroque fashions, some authentic, some from the 19th century, most imitations. Great attention is given to gold vestments and gold vessels, odd new habits and distortions of past religious objects. Monastic habits with tunic and hood were originally the ordinary clothes of laborers. As centuries passed, they became unusual when ordinary clothes changed. Still, the habits of the medieval monks and friars were simple, and no sashes and capes or medals are added. The habits of many congregations of men founded after 1830 were colorful and attention-getting, elaborating on the medieval or Baroque but without any connection to the modern world.

At graduations at Catholic universities, students, faculty and administrators wear their academic robes, while parents and families wear suits and dresses. A bishop in a silk cape with ribbons and a skullcap looks out of place. Once, at a fundraising event in a large hotel, a bishop wore what he called his “full dress uniform, which attracts lots of compliments on my wardrobe.” The main speaker of the night remarked: “If I were dying and someone with a red bow and gown drew near, I would be scared stiff.”

The media pays attention to the current pope’s red-pink shoes, fur-lined hat of the eighth century, elaborately embroidered stole from the 18th century. Recent images on television of bishops and popes in white and red cassocks, Renaissance hats and jeweled gloves no longer seem religious and sacramental but antiquarian and self-centered. The pope, during a visit to the White House garden in white cassock and no visible pants, looked out of place; distinctive and different, yes, but not spiritual. American Catholics are, for the first time, reacting to televised gatherings of bishops and cardinals where there is concern over wearing properly colored skirts and sashes.

New religious groups in the United States, along with some young members of older orders seem eager to wear a religious habit in public, not just on the grounds around a school but at airports or on the subway. What does a monastic habit or a cassock in public say to Americans at the beginning of the 21st century? It is not at all evident that the general public knows who this strangely dressed person is or even connects the clothes to religion. The symbolism is not clear and a message is not evident. The person does stand out, but as a kind of public oddity. Eccentric clothes instill separation. While some argue that odd clothes attract people, the fact is that more often than not they repel. Normal people are not attracted by the antique or bizarre costume, and ordinary Christians are not drawn to those whose special costume implies that others are inferior. Sometimes wearing clothes seems to be a substitute for real ministry.

It is not clear how men wearing dresses and capes proclaim God’s transcendence or the Gospel’s love. A man’s identity is something complex; the search for it lasts a lifetime. A celibate cleric gives up things that form male identity, like being a husband and a father. One cannot overlook possible links between unusual clothes and celibacy. Does the celibate male have a neutral or third sexuality that can put on unusual clothes? Are special clothes a protection of celibacy? Or are they a neutralization of maleness? Why would a man want to wear a long dress or a cape in public? Are spiritual reasons the true motivation?

Clothes are useful as they keep us warm or cool and cover our nakedness. They can make men and women attractive to others. Human beings and societies have come up with a variety of clothes to which they give particular meanings, using a few clothes as symbols — the toga, the high hat, the veil, the robe. What do ecclesiastical clothes say today? This question touches not only the wearer’s identity but the community’s faith. There is no absolute answer, no answer apart from people in their time and culture. Tradition and history are not an answer, for there is always a time when this ecclesiastical garment was unknown and there will be a time when it will be seen only in a museum.

Time brings and then buries styles. A medieval person probably understood episcopal regalia fairly well because aspects of his or her life depended upon its rare appearance, and it was seen in a milieu of many insignia. The elaborate arrangement of artificial clothes in the Catholic church is from the past four centuries. Today, unusual clothes appear on television as something connected to entertainment. What thoughts are conjured up when a cardinal or archbishop appears at a baseball game in a cape and gown? What does the cape and sash say personally and socially? Does it recall the New Testament or the liturgy of the Christian community?

There are no intrinsically religious clothes. Religious clothes are meant to point to some truth of faith or suggest a sacramental presence. The public person of each minister in the church should relate to the humble Jesus and to sacramentality in this church’s life. In the Christian community all clothing — this includes liturgical clothing — expresses the church’s life animated by the Spirit. Capes and cloaks in a Baroque style are neither prophetic nor countercultural. If regal or antiquarian distinction was once a value for church leaders, if pretension to being ecclesiastically or even metaphysically better was presumed, since Vatican II more and more people ignore such displays. Time never stands still. What seemed powerful in the past is today merely curious. Many Catholics are reaching a point where antiquated clothes are not inspiring and sacramental but exist outside human life.

Both the church’s expression of the reign of God and the culture to which it speaks are historical. Change touches everything. At any time, something new is being born and something static and alien is dying. History flows through the relationships between faith and grace and people, and those are always being determined anew in the concrete. The Holy Spirit strives, against sin, unreality and selfishness, to animate the church. In the last analysis, clothes are just clothes.

Henry David Thoreau said it well: “Beware of all enterprises that require new clothes.” Perhaps some lesson remains in the words of Psalm 132: “I will vest the priests in holiness, and the faithful will shout for joy.”