File under: When an apology is not an apology. Jesus, these men simply can’t stop the prevarication. They couldn’t take responsibility for their actions if their life depended on it. Shame, shame, shame!

By Liberty Zabala
Dark days fall upon the Catholic Church as files upon files of alleged child sex abuse finally come to light.

“You can imagine what the church has to lose,” says Child Sex Abuse Therapist Nancy Gutfreund. “You’re supposed to be an organization that completely protects its people and when there’s damage done nobody wants to admit it.” 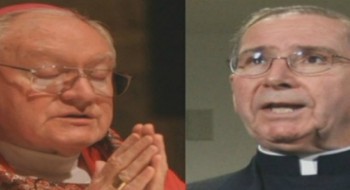 But Bishop Curry was forced to, releasing this statement saying:

“I wish to apologize for those instances when I made decisions regarding the treatment and disposition of clergy accused of sexual abuse that in retrospect appear inadequate or mistaken.”

“We have some very serious allegations of obstruction of justice at the very least by individuals, I think the community has trusted throughout for a number of decades,” says Santa Barbara City Chief Deputy District Attorney Hilary Dozer. “And that’s a disturbing fact.”

And prosecutors face another challenge. Most of the files happened in the 1980’s far beyond the statute of limitations.

“If an individual has actively hidden information from law enforcement, there are some ways and situations where that statute of limitations is tolled,” says Dozer. “Meaning it does not preclude us from going forward.”

Senior Deputy District Attorney Ron Zonnen to lead the investigation against the church.

Last year, prosecutors in Philadelphia were able to convict a monsignor and in Missouri, a judge found a bishop guilty for failing to report child sex abuse.