A retired Los Angeles cardinal accused of mismanaging a child sex abuse crisis has been stripped of all administrative and public duties by his successor. 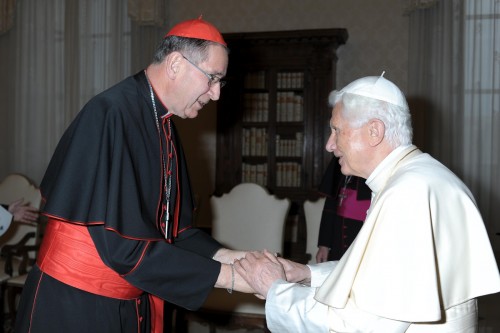 The Los Angeles archdiocese, the largest in the US, has released thousands of pages of files on priests accused of child molestation.

Cardinal Mahony retired in 2011, having run the archdiocese for 25 years.

Cardinal Mahony has publicly apologised for mistakes he made handling the clerical sex abuse issue.
‘They failed’

“I find these files to be brutal and painful reading,” Archbishop Gomez said in a statement. “The behaviour described in these files is terribly sad and evil.

“There is no excuse, no explaining away what happened to these children. The priests involved had the duty to be their spiritual fathers and they failed.”

He added that Bishop Thomas Curry, former vicar of the clergy who handled the cases of accused priests, had stepped down from his post as bishop of Santa Barbara.

The 12,000 pages of documents were released after Church records on 14 priests were unsealed as part of a civil case.

They showed both Bishop Curry and Cardinal Mahony had helped to shield accused priests from investigation in the 1980s.

A Church expert said the “very unusual” punishment showed how seriously the US Catholic hierarchy was taking the case.

“To tell a cardinal he can’t do confirmations, can’t do things in public, that’s extraordinary,” Jesuit scholar the Reverend Thomas Reese, a Georgetown University fellow, told the Los Angeles Times.

But a victims’ support group said Cardinal Mahony’s reprimand was too little, too late.

“When [Cardinal Mahony] had real power, and abused it horribly, he should have been demoted or disciplined by the Church hierarchy, in Rome and in the US,” said David Clohessy, director of the Survivors Network of Those Abused by Priests.

“But not a single Catholic cleric anywhere had the courage to even denounce him. Shame on them.”

The Catholic Church in the US has been embroiled in a series of child sex scandals over the past two decades.

A Church-commissioned report said more than 4,000 US priests had faced sexual abuse allegations since the early 1950s, in cases involving more than 10,000 children – mostly boys.